Today members of the Cross Campus Environment Network (CCEN) held a demonstration at the Melbourne office of HRL with the mock launch of a new 'clean coal' technology. The building went into lock-down when the protesters arrived at the steps of the office with a ramshackle 'state-of-the-art' coal cleaning machine.

HRL are currently in the process of re-submitting their proposal to the EPA for a new coal-fired power plant in the LaTrobe Valley which will feature supposed “clean coal” technology. CCEN are amongst a growing number of the population who are increasingly skeptical of the future that John Brumby is steering Victoria towards. Dan Musil, student, explains “We are concerned that the Brumby government is going to give this new coal plant the green light, meaning he will not only allow it, but actually spend public money on it. If Brumby is serious about tackling climate change, as he claims to be, he should be investing in renewable energy, and funding green jobs.”

The plant will use a dual gas-fire process to dry Victoria's brown coal so that it emits a carbon equivalent of conventional black coal. It is projected to increase Victoria's emissions by 3.4 million tonnes a year, while only provided 30 long term jobs to the LaTrobe Valley.

HRL's mock spokesperson Carlo Collodi spoke to the media “The beauty of our ‘clean-coal’ technology is it tricks people into thinking we are actually the saviours of climate change, when in fact, we are profiteering from devastation and pillage. Isn’t that great? Here at HRL we really hate the environment, and the general public – they’re just idiots aren’t they! We get to have our cake, eat some of it, and throw the rest in Australia’s face.”

The coal-lampooning theatre piece was popular, with many workers of surrounding buildings standing by and watching. Mr Musil concluded “Clean-coal technology is a farce. The public are ready to move on, and if the government hopes to stay relevant, it will have to move on as well.” 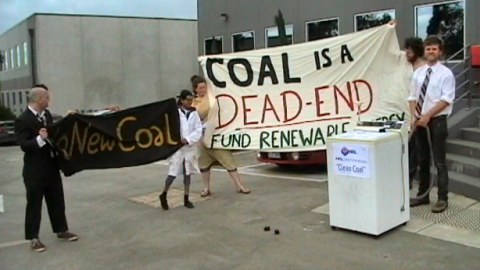 Re: Coal is a dead end! Community demonstration at HRL ...

ps - posted this link earlier today, but it seems to have evaporated ...