Climate activists who shut down coal export from Newcastle port today may be subject to $97,000 in "victims compensation" according to a report by Rising Tide Newcastle.

The Port Waratah Coal Services, controlled by Xstrata and Rio Tinto two of the world's largest mining companies, may be seeking $97,000 in "victims compensation" due to the disruption to coal loading due to the protest. Pursuit of such a claim would be the latest SLAPP (Strategic Litigation Against Public Participation) used to attempt to silence environmental, climate and public interest protestors. The prosecution of 20 activists by Gunns (The Gunns 20) is the best known SLAPP case in Australia, which ultimately failed. (See Sourcewatch - SLAPP's in Australia)

Xstrata PLC is the largest exporter of thermal coal, and recently reported that first half profit has tripled this year due to metal and coking coal prices increases. Net income rose to $2.3 billion from $690 million a year before, according to a Bloomberg report in August.

Similarly, Rio Tinto has recorded a record first half net profit of $5.85 billion based upon rising prices for iron ore and coal, compared with $1.62 billion profit in the first half of 2009 according to a Marketwatch report.

The Newcastle coal port protest by climate activists has shutdown coal loading for much of Sunday. The protest started pre-dawn and involved up to 45 people. Some activists climbed onto equipment to shut down operations.

The first arrests ocurred at 9.45am at the Carrington Coal Loader where police had to cutoff two people locked onto the coal loader and taken into custody and have been charged with Enter and Remain on Enclosed Lands.

Three more arrests ocurred around 11.30am, including two climbers who had to be removed by crane and were taken into custody.

At midday 36 people who occupied coal stockpiles were arrested, but sudsequently released without charge at this stage.

At 1.30pm two climbers were removed by crane by Police Rescue Squad from the NCIG coal terminal. The final climber was removed at about 3pm. All climbers were charged with Enter and Remain on Enclosed Lands (two charges).

By 1.45pm Rising Tide were reporting that Port Waratah Coal Services "will be seaking $97,000 in 'victims compensation'".

Annika Dean, spokesperson for Rising Tide Newcastle who organised the protest said: "45 ordinary people, of all ages and all walks of life, have come together today to make a stand for the future of our planet. Around the world, the impacts of global warming are becoming worse, while the fossil fuel industries that fuel this crisis are continuing to grow unabated. We were compelled to take these actions because our political leaders are failing to take any action at all." 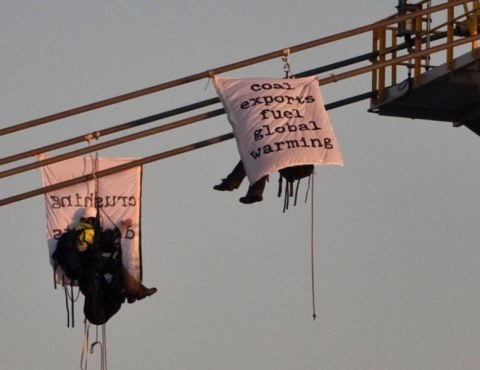 Here's another example of a SLAPP lawsuit: http://texsquixtarblog.blogspot.com/2010/08/amway-lawsuit-update-dont-me...

This isn't exactly a SLAPP suit because instead of being civil action, it's a compensation order tacked onto a criminal charge. The whole thing is over in ten minutes and the burden of proof is much lower. There's not much opportunity to make a defence against the claim.

The Victims Compensation laws were introduced to compensate victims of physical injury (assault, domestic violence victims etc.) but like all laws, the rights that are won for real people also become the rights of big corporations who can claim, without a hint of irony, that they are the "victims" of peaceful protestors who stood in the way of their attempts to export and burn coal at breakneck speed.

I doubt that it will be successful in court - it's been tried four times in NSW before, and never succeeded.

Australian born to seek 'victims compensation' from mining companies for minerals taken from their home ground without their permission. An assault on our natural habitat, our rivers,threatening our wild life, our atmosphere , our lifestyle, our culture and the natural beauty of our country. Causing depression, anxiety, fear, anger, sadness, disgust and tensions within our belief systems. Fear for the ignorance and destruction of our land and the future of up and coming
generations. How dare you blame these people for defending what is rightfully theirs.

Global warming in not an national issue

"Australian Born" - global warming is an international problem requiring an international solution. Global warming doesn't care where you were "born and raised". I don't think the activists were trying to defend "their culture" but defend all the people and the animals of this world from the effects of rapid climate change and making a statement that private companies of whatever nationality shouldn't profit from environmental vandalism

Re: Global warming in not an national issue

You're right to say that if climate change does anything, it makes us realise that the problems we face as a species dwarf the problems that divide us along national lines.

But there is one way in which "Australian born" is right. For the original people of this area, coal is "Nikkin" - a symbol of the treaty between their people. By exporting and burning Nikkin the coal industry is claiming a right to destroy something which never belonged to them.

We need to begin to realise that the earth does not belong to anybody, and respect the wisdom of elders who have knowledge of their lands passed through oral history for millenia.

The victim's compensation figure is now $619,331, and will be going to a two-day trial.

Im impressed. Youre truly well informed and very intelligent. You wrote something that people could understand and made the subject intriguing for everyone. Im saving this for future use.