Climate activists have closed down the three coal export terminals at Newcastle harbour, the world's largest coal export port, stopping all production and loading. "Urgent action against global warming is needed. We have been forced to make our dramatic protest today because the Federal government is failing to take any action." said Anika Dean from Rising Tide Newcastle.

The activists have called on Prime Minister Julia Gillard to take action on global warming and put an immediate moratorium on the expansion of the coal industry, and support the expansion of renewable industries.

The action started pre dawn with a team of eight activists entering the three coal terminals with climbing equipment and abseiling down structural cables that suspend the coal loaders over the coal ships, effectively stopping the use of this equipment due to safety requirements.

At 8.30am another thirty six people entered the coal terminals and locked on to ancillary equipment and unfurled banners. All shipping operations at the three terminals operated by Port Waratah Coal Services have been shut down by port authorities and police.

"We are staging an emergency intervention into Australia's number one cause of global warming." said Anika Dean spokesperson for Rising Tide Newcastle in a media statement.

"Around the world, the early impacts of unabated global warming are beginning to emerge. 2010 has been a year of tragic weather disasters."

"Thousands of people have died this year due to flash floods in Pakistan and China, and fires in Siberia. Millions of people are facing starvation due to a devastating drought in west Africa. These are the impacts of global warming that scientists have been warning us about for decades. Global warming is happening now, and it is killing people."

"Australia is a major contributor to this crisis, due to the massive volumes of coal we export. We are exporting global warming to the world. With the support of both Labor and the Coalition, Australia's coal exports are booming. Here in Newcastle, already the world's biggest coal port, multinational mining corporations are planning to triple exports over the next decade. It's a similar story at all coal ports in the country."said Ms Dean.

By mid afternoon on Sunday police had cut free two activists hanging from cables on a coal loader gantry and had arrested them, according to an ABC report. A spokeperson for Rising Tide said protestors are peaceful and are not resisting arrest.

Deputy Leader of the Greens Senator Christine Milne reflected upon today's protest in a comment on the Treasurer's economic note about introduction of a carbon price, "Civil society can now have hope that the serious action they know is needed to address the climate crisis is possible and actions like Rising Tide's peaceful and effective blockade in Newcastle today will be very helpful in reminding the body politic that the community is watching carefully."

Rising Tide disrupted the opening of Newcastle's third coal loader in March 2010, and a week later used a protest fleet to blockade coal export from the Port.

Newcastle exports over 90 million tonnes of coal per annum (Mtpa), making it the world's biggest coal port. The industry is dominated by transnational mining corporations BHPBilliton, Xstrata, and Rio Tinto. Newcastle coal exports are expected to more than doubled to 211 Mtpa capacity with the current export expansions implemented. Planning is now underway for a fourth Newcastle coal terminal to take exports to more than 300Mtpa. 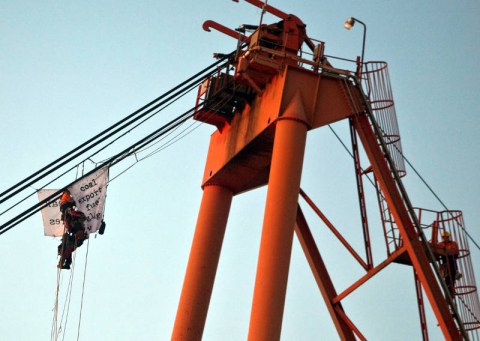 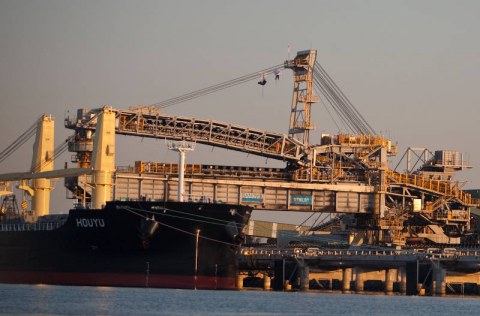 Only 40 protester arrested?
How's that?
How is it that there are countless thousands of consenting climate change scientists but only 40 protesters get arrested? You would think these "scientists" would be out there marching in countless thousands and thousands and thousands............
People, this is our Iraq. Climate change will do to us what WMD's did to the neocons. We must back off of the doom and gloom and motivating by fear of death by CO2 while we still can.
I can't keep scaring my kids with this CO2 mistake.

Wake up people, climate change is a globalist scam to tax us to death. the effects of a tax would have little if any difference to the climate (assuming it is a valid science, cough, cough!)

There are far more important environmental issues we should deal with. Pollution, Prevention of the shelving of advanced energy technologies. Plastic oceans, poisoning of foods with GMO, destruction of rural economies with Terminator seeds, global takeover by the banking and insurance sectors. false flag terror etc.

The green movement was co-opted by the corporate world years ago and we are being hit with massive fear mongering campaigns. Protecting the environment is a valid cause, however the mechanisms in place are tools of deceit and in the end will only serve to pillage us and feed the rich.

Global depopulation and the removal of the middle class is the stated goals of corrupt organisations such as the Club of Rome, The Bilderturd Group, Greenpeace, CFR, UN, IMF, WWF et al.

While the slaves do mean well, they have been completely misinformed and support enviro-causes blindly out of guilt, meanwhile the ringleaders create plausible problems, that we will react to, allowing them to deliver solutions that were the endgame to start with.

wake up people there is a war on for your mind. an infowar. infowars