Residents of the town of Collinsville, west of Bowen, have just finished a two day blockade of the train line that is used for transporting coal from the Bowen Basin to the Abbot Point coal terminal in North Queensland. The residents are angry about a proposed increase in rail traffic and the adverse health impacts on residents from the increase in vibrations and coal dust emissions, and the problem of delays for emergency vehicles in a town bisected by the rail line.

"This isn't about money - this is about quality of life, health, children," said Whitsunday Councillor Peter Ramage according to this ABC report.

And residents do have much to worry about with coal mining and export expanding under a Government friendly to the coal industry. On Tuesday afternoon an official from QR Rail met with residents and an uneasy peace was negotiated. The Blockade was lifted 8am Wednesday, but residents say it may be imposed again depending on further meaningful action.

Coal is hazardous to human health

According to Doctors for the Environment Election Manifesto on the Health Impacts of Coal Pollution and Renewable Energy: "Pollution from coal affects all major body organ systems and contributes to four of the five leading causes of mortality in the U.S. heart disease, cancer, stroke, and chronic lower respiratory disease and asthma. It interferes with lung development, increases the risk of heart attacks."

Coal is hazardous to human health in each step from mining, transport, combustion and disposal of waste products. The adverse health effects of coal dust are very well known. While there has been substantial research into the impacts of air pollution from coal in Europe and the USA, related research in Australia has been limited.

David Shearman, honorary secretary of Doctors for the Environment Australia wrote in The heat is on for change: coal published July 10 in The Australian: "The health burden of coal in Australia is estimated conservatively at $2.6 billion a year. There are also economic losses due to land pollution and degradation and the open mining of good agricultural land in the face of the projected world food crisis." David Shearman is also an emeritus professor of medicine, and a practising physician.

One recent report which highliights the health risk from coal - published in November 2009 by Physicians for Social Responsibility in the USA - is 'Coal's Assault on Human Health' - which details the devastating impacts of coal on the human body, including respiratory, cardiovascular and neurological effects. A chapter is also devoted to coal's impact on global warming. The report makes substantial policy recommendations that detail why coal power should be phased out and replaced with renewable energy sources. You can read a brief review on Climate IMC: USA: Medically defensible energy policy on climate: phase out Coal

But the residents aren't saying to phase out coal, at least at this stage. They are simply concerned at the well documented dangers to their health by the proposed great increase in the number of coal trains passing through their town. They are proposing the line be diverted.

So what happened with the blockade

The current rail track disects the southern end of town and residents are asking that the track be moved for their health and safety as part of rail extension activity. Residents are demanding a 10-15km diversion track around the town as part of the proposed new 90km long Missing Link rail line between Moranbah and Newlands. The extension track will boost the number of coal trains through Collinsville to between 40 and 70 a day, with an expected throughput of 50 million tonnes of coal per year. Each train takes about 7 minutes to pass.

Residents blockaded the rail line from 11am Monday stopping all trains. A camp with tents, lights from a portable generator and a barbecue were set up and local businesses donated food and drink for the protest. Between 20 and fifty people maintained the blockade at any one time with numbers dropping off early in the morning as families prepared children for school.

An initial concession was made to the the protest on Tuesday of a residents meeting with a senior QR National oficial, if the blockade was called off. But the residents discussed this proposal and the group consensus promptly dismissed it - sticking to their blockade. Some of the protesters are retired miners and unionists and know the importance of a good picket line, and not to cave-in too early.

The meeting went ahead 3pm Tuesday while the blockade continued. Queensland Rail National group general manager network Ian Dall met with residents and police and agreed to provide action on limiting coal dust emissions and hold fortnightly community meetings with residents, and undertook to do an environmental impact statement if coal freight reaches 50 million tonnes a year. The rail official also told residents a rail bypass would cost more than $100 million and is not viable at this stage.

The blockade was suspended at 8am Wednesday. According to Councillor Peter Ramage, a protest spokesperson, "There's been a sign of good faith (at the meeting) with the commitment by the general manager of QR National to hold fortnightly meetings about the progress towards alleviating the problems," he said. "I've also been given the phone number of Minister Nolan so I can call her tomorrow (Wednesday) and make a date for a meeting." he told the Townsville Bulletin

While residents have lifted their blockade of the track, they are still not entirely happy and may take further action if their concerns are not met. Residents want the Queensland Transport Minister Rachel Nolan or Premier Bligh to visit the town.

According to the Wikipedia article, "the Bowen Basin contains the largest coal reserve in Australia. This major coal producing region contains one of the world's largest deposits of bituminous coal. The Basin contains much of the known Permian coal resources in Queensland including virtually all of the known mineable prime coking coal. The Bowen Basin covers an area of over 60,000 square kilometres in Central Queensland running from Collinsville to Theodore. The Basin has 34 operational coal mines that can extract over 100 million tonnes annually."

Queensland coal already accounts for as much as 20% of the global trade, with current expansion plans by the state Labor government which will double coal exports. At a time when the rest of the world is looking to reduce greenhouse gases, the Queensland government is expanding coal production at an unprecedented rate.

The coal industry receives substantial subsidies from the Queensland Government . According to Queensland Coal Subsidies: Lessons for the Budget, June 2009 article on the Sixdegrees Coal and Climate website: "Queensland Rail (QR) spent $660 million on 'below rail infrastructure', that is, new tracks and $850 million on track maintenance. Both of these figures were obtained from Queensland Rail reporting on the 'CoalRail' network, a network of train lines within the Bowen Basin that exists for the sole purpose of hauling coal to export terminals. $856 million was spent on the expansion of these coal export terminals at Bowen, Brisbane, Gladstone and Hay Point (near Mackay)."

Takver is a citizen journalist from Melbourne who has been writing on Environmental and Climate Change issues and protests including Rising Sea Level, Ocean acidification, Environmental and social Impacts since 2004. 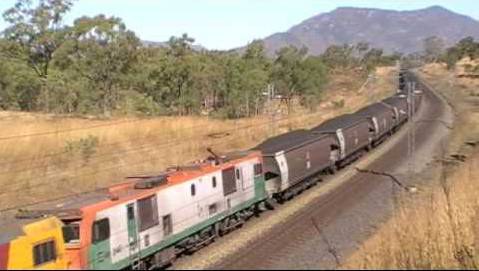 More environmental devastation is on the books for the region to the north of Noosa. Not to mention the health effects on the people 2.15 km away from this newly planned coal mine, with a huge capacity…which will spill in to the Mary River.It’s right next to a little town called Aldershot, which is just outside Maryborough .The Aldershot And District Against the Mine (AADAM) group are alarmed about the Colton coal proposal at Aldershot and also about planned coal projects from Gympie to Tiaro and beyond. If this project at Aldershot gets the go ahead just 2.15 Km from residents, it will set a precedent for the whole of the north coast, as it did in the Newcastle Hunter region of NSW. The wash water will be headed for the Mary River, among other huge environmental and health concerns.The Traveston dam may be over for now, but the Mary River and the people living around it, are still a long way from being safe. Steve Harding, president of AADAM, explains.
Download mp3 at http://www.noosacommunityradio.org/coal-mining-threat-to-the-mary-river/
Runs 7′10″