Melbourne 5 July 2010 - Aboriginal people have been encouraged to take possession of unoccupied and Crown lands including abandoned buildings to assert their ownership and original title. This proposal comes out of an Aboriginal conference held in Melbourne from 1-4 July. The third meeting of the New Way Summit movement, initiated by Michael Anderson, heard that the Mabo judgment on Native Title was legal trickery, because hunting, gathering, walking on land, ceremonies on Country do not constitute a claim to legal title and ownership, whereas erecting fences, buildings and clearing of land does as an act of ‘adverse possession’.
Read more at Green Left Weekly and at Treaty Republic

Adverse possession is the means by which the colonizers asserts title to alleged ‘wild country’. Anderson, legally trained in Western and Aboriginal law, advised the conference that the Crown and ‘squatter rights ‘ are totally underpinned by a ‘Doctrine of Discovery’, which has its origin in the Papal Bulls (bull = seal) issued in 1453 and thereafter.

“The Papal Bulls defined Aboriginal Peoples and all non-Christians as animals and brutes to be the legitimate prey of Christian monarchs, who were then carving up the world between them,” Anderson said.

The conference participants were advised that before taking this assertive action they need to challenge the colonizers’ jurisdiction over their sovereign lands.

Anderson suggested they follow the action of his Euahlayi people by writing to the Queen, the Governor-General, their state Premiers and the Prime Minister demanding they prove they have jurisdiction over Australia.

The Euahlayi demand that the authorities produce certified copies of documentation where the people allegedly ceded and acquiesced their sovereignty and title to their lands by way of signed surrender documents.

“Obviously no such documents exist, this admission by the authorities will establish and confirm Aboriginal ownership. Any action of reclamation by Aboriginal people cannot be considered an act of theft or trespass. These admissions are a shield against colonial coppers.”

Gary Foley, like Anderson, an original member of the 1970s Black Power movement said, “We must activate the grassroots people so that they become actively involved in controlling their own affairs. Talk of international operations and grandiose challenges without grassroots action means nothing.”

The conference resolved that international legal and political challenges are now pending and will be mounted within the coming months.

The Victorian convenor of the third New Way Summit, Sharon Firebrace, told the meeting that in the last 30 years Aboriginal affairs has become corrupt to the core through politicians and government bureaucrats and their Aboriginal collaborators, which gave the government the pretext to shut down our self-determination.

Anderson says, “The lure of mining royalties is the new colonial method to make our people sign away their rights to land.”

The summit resolved to set up a system to name and shame treasonous activities by Aboriginal collaborators.

The next New Way Summits are planned for Darwin at the end of July and Townsville in early August. 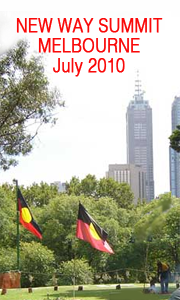