At the same time on Friday as Trade Minister Simon Crean was signing the deal to export brown coal to Vietnam, Climate Change Minister Penny Wong issued a press release welcoming the passage of the enhanced Renewable Energy Target and Building Energy Efficiency legislation through the Federal Parliament. One could interpret Penny Wong's PR as a greenwashing response to the Beyond Zero Emissions launch on Wednesday for a Zero Carbon Australia 2020 Stationary Energy Plan of zero emissions.

“The Renewable Energy Target will ensure 20 per cent of Australia’s electricity supply in 2020 will come from renewable sources.” Penny Wong said. The bill splits the Renewable Energy Target into two parts from 1 January 2011: small scale systems such as solar photovoltaic panels and solar hot water systems on residential housing; and large scale projects like wind farms, commercial solar and geothermal.

But will 20 percent of electricity supply from renewables by 2020 be enough to forestall the impacts of climate change?

In a blog post Tony Mohr, climate change manager from the Australian Conservation Foundation called the legislation an important step towards a cleaner future for Australia but said much more needed to be done. “The government has agreed to fund just two of the 52 projects that applied for funding under the Solar Flagships program. These are 52 proposals for real projects that would make the kind of shift we need, but none of them will get support from the current Renewable Energy Target." Tony Mohr said, “Australia could join other leading countries like Germany by increasing the share of electricity to 40 per cent by 2020."

But the Zero Carbon Australia 2020 initiative goes further. "The premise of a 10 year transition is based on ‘The Budget Approach’ from the German Advisory Council on Global Change. In order to have a 67% chance of keeping global warming below 2oC above pre-industrial temperatures, on a basis of equal allocation of emissions on a per-capita basis, it would be necessary for the USA to reduce emissions to zero in 10 years. Australia has the same per-capita emissions as the USA, and would need to pursue the same goal," the plan says.

The Zero Carbon Australia 2020 synopsis calls for 40% renewable energy from wind generation, 60% from large scale concentrating solar thermal power with molten salt storage for 24/7 baseload operation, and backup from Hydro-electric and biomass power generation. The plan specifies sites around Australia that are selected for their wind availability, solar incidence, economy of scale, transmission costs, technical efficency, and geographical diversity: 23 sites for wind, and 12 sites for Concentrating Solar Thermal (CST). The plan is based only on existing commercial technology.

The plan has received support by a variety of academics and scientists. Associate Professor Keith Lovegrove, Leader Solar Thermal Group at the Australian National University said ”The ZCA report analyses one particular scenario of renewable energy technology choice based on available solutions, in considerable depth. It successfully shows in detail that 100% renewable energy is both technically possible and economically affordable. Clearly other renewable energy technology scenarios are also possible, that only serves to strengthen the overall conclusion about viability. The group is to be congratulated for their efforts."

The plan has been costed at $370 billion, or about 3 per cent of GDP per year for 10 years. It could become a 21st century equivalent of the Snowy Mountains Scheme creating up to 80,000 jobs from installation of renewable energy generation at the peak of construction, and over 45,000 jobs in operations and maintenance that will continue for the life of the plant. Such a scheme would also generate up to 30,000 jobs in manufacturing wind turbines and heliostats.

The Beyond Zero Emissions plan was launched in Canberra by Senators Christine Milne (Greens), Judith Troeth (Liberal), and Nick Xenophon (Independent), just as the backroom talks to replaceKevin Rudd were taking place. So the news on Thursday was all about Australia's first female Prime Minister, Julia Guillard.

Matthew Wright, Beyond Zero Emissions Executive Director said at the launch “It’s time for the Australian parliament to a implement a climate and energy policy agenda to repower our economy with 100% renewable energy by 2020. Concentrated solar thermal technology is capable of generating renewable electricity 24 hours a day and credible climate and energy policy will encourage the rapid deployment of the technology in Australia. This should be a priority for Australian governments,”

Australian Greens Deputy Leader, Senator Christine Milne, said: “We can and must aim to power Australia with 100% renewable energy as soon as possible if we are to truly tackle the climate crisis. This Zero Carbon Australia plan is an extremely valuable contribution which all in the parliament should be looking at very seriously, particularly as we are currently debating renewable energy legislation in the Senate.”

So Climate Change Minister Penny Wong and the Australian Parliament gave us on Friday the plan for 20 per cent renewable power by 2020, but what we really need is something much more. Zero Carbon Emissions have shown that reducing stationary carbon emissions to zero is feasible, it just depends on the political will and leadership.

The zero emissions plan comes as Australia prepares to host the first international conference held in Australia to discuss the science and options for adapting to climate change, due to begin June 29 on the Gold Coast.

Conference chairs National Climate Change Adaptation Research Facility (NCCARF) Director Professor Jean Palutikof said "The science tells us that climate change is happening faster than we thought and that the ‘window’ for us to adapt and prepare is smaller than we thought. Australia is already experiencing the effects of climate change and is likely to be one of the most severely affected amongst developed countries."

“Regardless of what mitigation actions we take now as a nation or globally to cut greenhouse gas emissions, it is too late to ‘mitigate our way out of the problem’ – we will need a mixture of adaptation and mitigation measures.” said Jean Palutikof.

CSIRO Climate Adaptation Flagship Director Dr Andrew Ash said more than 1000 scientists and decision makers from developed and developing countries were expected to attend. “The impacts from climate change will be felt first and most severely in developing countries, and international co-operation is required to ensure developing countries have the tools and resources they need to adapt.” 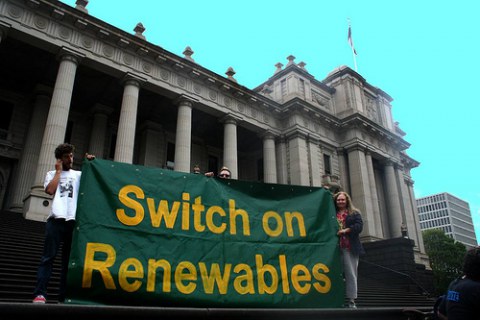