The G20 countries have rejected the proposal for a micro tax on large financial transactions - dubbed a Robin Hood Tax - at the meeting in Toronto Canada 25-27 June, while riot police have turned the streets into a bloody battleground with pre-emtive house raids of activists, attacking peaceful protests, baton charges, and over 100 arrests. (See up to the minute reporting from the G20 Alt Media Centre) | Toronto G20 People's March Photos

The conservative Canadian Government of Stephen Harper has made a strong push to control the summits' agenda in a range of areas including Deficit cutting through economic austerity, narrow economic reforms and blocking the Robin Hood tax proposal, watering down climate change proposals, while reportedly spending US$1 billion on policing and security.

According to Greenpeace, a leaked G20 declaration sees G20 abandon plans to stop handouts to Big oil and Coal. "Governments passing one hundred billion dollars a year of taxpayers’ money to big oil and coal is immoral when compared to their refusal to provide the same amount of money for the poorest countries for climate change adaptation and mitigation.” said Kumi Naidoo, Greenpeace International Executive Director, an observer at both the G8 and G20 Summits.

Australia and Canada have been prominent blockers at G20 for implementing this tax, despite the banking sector being the most profitable industry on earth, and Governments having to bail out their economies to the tun of about US$17 trillion. The tax could play a prominent role in reducing financial turbulence in global markets. Other opposition came from developing countries including Brazil, India and Mexico.

The Robin Hood Tax has drawn strong support from the NGO sector, particularly Oxfam, with proposals being put before the G20 by France, Germany and Britain, and some support from the USA. The proposal is a tiny financial transactions tax of 0.05 per cent, which would raise about US$400 billion globally. Such a tax would be applied across the board to trading on a broad range of financial assets including shares, bonds, commodities, currencies, swaps and derivatives.

The proceeds of the tax could fund poverty alleviation, climate change and domestic public services like health and education.

According to an Oxfam statement, "Billions of dollars are traded on financial markets every day. The amount of money traded annually is 75 times global GDP, a huge increase from 1990 when trading was 15 times global GDP. Most of this increase is due to high-speed, high-volume speculation by traders. The enormity of this speculative trading can cause the prices of financial instruments to fluctuate and vary more widely than in the past from economic fundamentals."

The tax had received support from three hundred and fifty prominent global economists, including Nobel prize-winner Joseph Stiglitz, who signed a statement that the Robin Hood Tax provides a disincentive by taxing speculative trading that has been decried as market-distorting.

Wayne Swan, Deputy Prime Minister and Treasurer representing Australia at the talks told AFP "A levy in itself does not do anything to fix the underlying problems that caused the global financial crisis," he said "The truth may well be that some people are looking to a levy because they just want to raise a little bit of extra money."

According to the Age, Wayne Swan told a business forum "So in putting forward a solution, which the G20 must, it must recognise different circumstances in different countries," Mr Swan said. "The response needs to be much more nuanced now, the measures we used at the end of 2008 and early 2009 were blunt, as they needed to be."

Oxfam Australia had urged Wayne Swan to support the Robin Hood Tax proposal. Oxfam International has called for investment decisions and action from the G8 and G20 on climate, alleviating global poverty, and regulating the global economy.

So while many mainstream stories may focus on the violent battles initiated by the police on the streets of Toronto, many issues and criticisms of the G8/G20 remain essentially poorly reported or not talked about, including:

Follow citizens media reporting from Toronto from these sites: 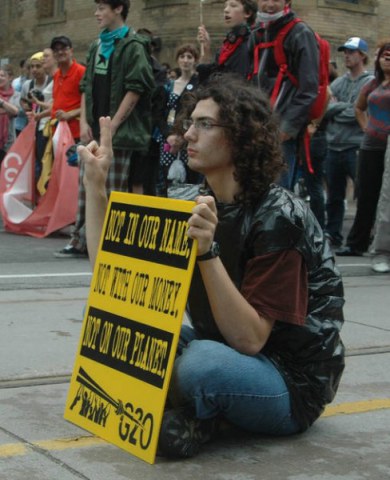 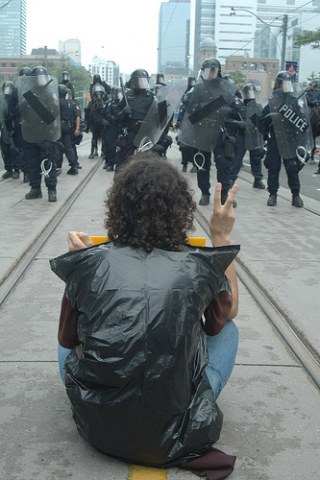 As a person living in Toronto and witnessing todays events first hand I find your comments about police unfair and untrue. "while riot police have turned the streets into a bloody battleground." This is simply not true. The criminals who attacked police vehicles and vandalised property turned the streets this way and the police acted accordingly. Every single person who was involved should be ashamed and I for one am extremely embarassed for my city and country.

Vandalising property does not cause bloodshed. Unlike police brutality. Which is getting more out of hand every day, all over the world. They are ready to spill as much blood as necessary to protect wealth against _life_.

The people who took to the streets showed human courage. The police are the embarrassing ones. Wake up, don't be a sucker!

Don't be. We know Toronto and Canada as beautiful, peaceful places. The ugly incidents we saw on television are what we have come to expect from violent little people: small businesses that employ hard working staff are rewarded by psychopathic troublemakers who enjoy wrecking business premises by smashing shopfront windows and burning public property.

We looked up the organisations named in the headline top of this page.

We will cease donations, and encourage all colleagues, all over the world, to do exactly the same.

I love the smell of bacon(actually I'm a vegan).

Its good to see the paid agents of the state of Canada taking the time to post to indymedia. thanks boys!(or girls)

Jesse Rosenfeld - The Guardian and Independent Journalist on his arrest and detention:
http://vimeo.com/12924476

The mass repression at the G20 summit World Socialist Web