I was raised in the tranquil, spacious, sometimes ghostly-empty city of Adelaide, Australia. Like many activists, there was something easy, privileged, even boring about my upbringing that made me determined to work with people at the other end of the scale.

So I find myself now working as a human rights activist with the International Solidatiry Movement (ISM), in Palestine. ISM supports Palestinian civil and human rights, and provides an international presence wherever Palestinians are practising non-violent resistance to the military occupation.

One of the villages regularly visited by workers from the ISM is a place called Iraq Burin (no relation), in the northern West Bank, near Nablus. Every village here seems to have a story, and Iraq Burin's is quite unhappy. In brief: a Settlement was built nearby, and the Settlers there are especially radical. In the last couple of years, the people of Iraq Burin have been attacked by Settlers while cultivating the land only metres from their village. The Israeli Army were called in, not to protect Palestinians from the attacks, but instead to push back the Palestinian villagers, who are automatically treated as the guilty party in any conflict.

Since that time the villagers have struggled to work the land, as they are still unprotected from Settler violence. There is also an Army base at the top of the valley, and each Saturday the soldiers send a unit down to the slope facing the village. The villagers go out to meet the soldiers, chanting and waving flags (and hiding handfuls of stones), asserting their right to cultivate their land.

Three months ago, the pressure on the village was horrifically increased. After the regular demonstration of March 20, an Israeli army jeep entered the village from the other side. The soldiers fired live ammunition at the first two youths they came across, killing both of them. They then left the village. Accurate details of this random military murder were only available because of ISM's regular visits to the village.

The shootings were probably intended to cow the village into submission, but the following Saturday, and all Saturdays since, the people of Iraq Burin have continued to walk out onto their land. Workers from ISM visit the village on Saturdays, making it clear to soldiers that internationals are present, and that their actions will be documented and disseminated.

This Saturday myself and another ISM volunteer travelled to Nablus, where we found a van going to Iraq Burin. However just after we got into the van, a man leant through the window and excitedly told the driver something about "jaish": the Army were blocking the road to the village. Animated argument followed, and eventually we communicated to the driver that we still wanted to go in the van, but that we should be let out before the army roadblock. The soldiers would certainly not let internationals through to the village.

The van took us up a hill towards the village, then at a certain point it stopped and let us out. A Palestinian teenager got out with us, to show us a path across the hills. The walk would have been beautiful, if we weren't so nervous about the soldiers on the other side of the hill.

In Iraq Burin, we find the children of the village already busy, laying large stones on the road to slow down an Army invasion. An older man approaches the van and starts admonishing the teenagers: I ask for translation, and it seems they have some disagreement about whether they should continue to protest or not. Some of the older people think that the deaths are too high a price to pay. But the teenagers disagree, and indeed it seems that most people in the village are not willing to surrender their right to protest.

We go with some youths to an empty house on the edge of town, where we were sit down on rough stones and share food together. These protestors are fifteen, sixteen, eighteen years old: it was their friends who were shot dead three months ago; and if the Israeli Army were to extract a human price from the village again, it would probably be one of them who would take the bullet. They don't seem nervous at all though; instead they are all bravado, grinning and posing for photos. I wonder what feelings they hide behind the front.

The group forms up: 25 villagers, teenaged, middle-aged, and even children. There are just two internationals present, myself and the other ISM volunteer. We remove our hats and scarves, hoping to make sure the Israelis can see that internationals are present.

We walk up through the somewhat neglected olive and grape plantations on the slope in front of the village. As we reach the top, a group of soldiers comes into view, about 12 of them in a group on the crest of the hill, less than 100 metres ahead. The Palestinian youths begin waving their flags, chanting and singing, and a couple of them defiantly throw rocks, though the soldiers are well out of range. The soldiers stand watching for a couple of minutes, macho with their hands on hips, M16s hanging over their shoulders. But soon they begin pointedly preparing their weapons, then one of them throws a sound bomb into the space between the groups, and the whole hillside is shaken by a loud bang.

I have the strong impression of a Saturday football match, for which the kickoff whistle has just been blown. The soldiers now begin firing teargas cannisters towards the youth, who respond with more taunts and chanting. Things are pretty one-sided, and very soon the youth are overwhelmed by the clouds of noxious gas. They run back down the hill towards their village, dodging the (potentially deadly) cannisters. The soldiers lazily pursue the group, firing more gas. They are now firing into the fields and vineyards at the bottom of the gully, and the hot gas cannisters soon start a fire in the ripe, dry wheat. The Palestinians now pay less attention to the cannisters being fired at them, and begin desperately trying to beat down the fire with branches. But they don't stand a chance, as more cannisters land and the fire grows quickly. The field is lost.

At this moment, bizarrely, a fat man rides past on a donkey. He's probably aware that there is a demonstration going on, though I can't be sure.

Superficially, this Saturday protest in Iraq Burin may seem like a two-sided conflict, in which both parties willingly engage. Two groups meet up at an arranged time and place, and have a short pitched battle. Indeed, the soldiers may well find this enjoyable; but they are the only ones carrying arms. The battle is one-sided, and it is hard to see how the soldiers justify their presence on the villagers' land.

By moving into this space, the Israeli army subtly shifts the boundaries of Palestinian livelihood. What was the village's income source become contested space; the next step will be to construct a fence or wall between the village and its adjacent fields, so that the village itself would begin to die.

Though they may keep up their taunts and bravado, for the people of Iraq Burin this Saturday standoff is deadly serious. If they become too afraid to walk out on their land, they will lose it. Indeed, even if they are brave enough to dodge gas and sometimes bullets, the land may be lost to them anyway: you can't cultivate a hillside if you don't have the security to go out there every day, in peace, and tend your crops. 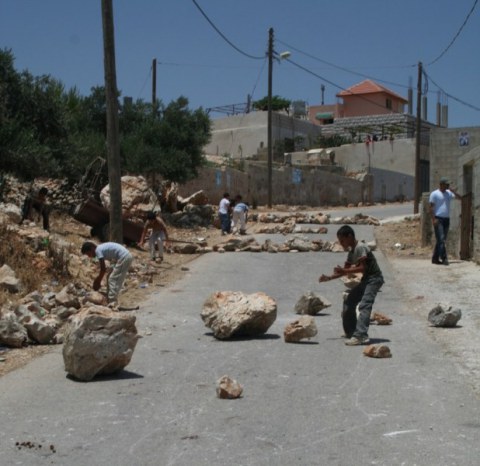 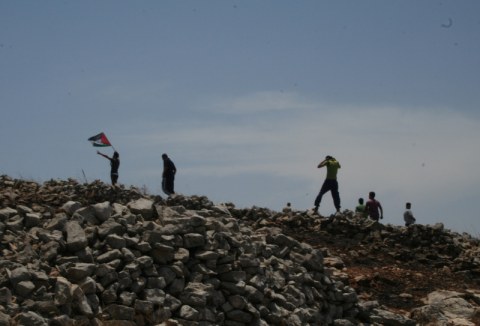 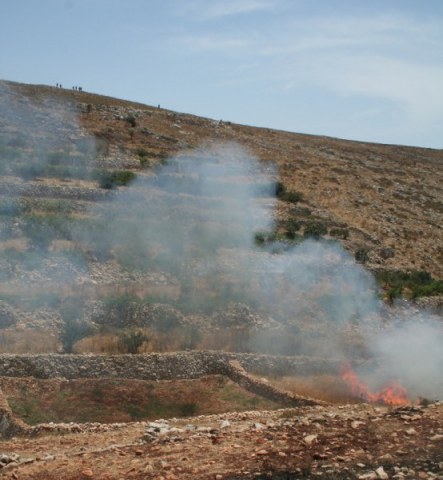 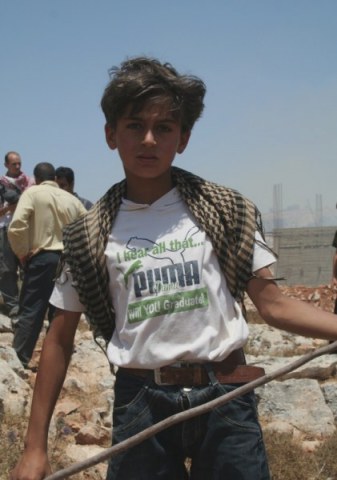