Greenpeace activist injured during attempt to save Bluefin tuna

A Greenpeace activist was speared through the leg and severely injured as he and other activists from the Rainbow Warrior and the Artic Sunrise confronted French Bluefin fisherman and attempted to release Blue Fin trapped in a net. Recently the Convention on International Trade in Endangered Species failed to ban Blue Fin Tuna fishing despite the fact stocks are crashing globally to critical levels. Sea Shepherd is also running a campaign Bluerage to disrupt Bluefin tuna this Summer.

As bluefin tuna fishing began in the Mediterranean today, just south of Malta - we set out to peacefully rescue endangered fish trapped inside a massive purse seine net. But our boats and activists were met with violence as several fishing vessels closed in on them.

Having found a fishing vessel – the Jean Marie Christian 6 - towing a purse-seine net, we launched inflatable boats from our ships the Rainbow Warrior and Arctic Sunrise with the intention of submerging one side of the net to free the tuna trapped within. Other tuna vessels in the area immediately confronted and attacked our activists. One activist was seriously injured when the spike of a grappling hook was stabbed straight through his leg. He is now being evacuated for emergency care. Flares were also fired directly at our activists. Two of our inflatable boats were slashed with knives and one sank after being rammed and then run over by fishing vessels. Another inflatable was badly damaged and several of our activists had to be rescued from the sea.

Inaction of the industrialised North and international regulatory bodies is essentially condeming this key species to extinction. Many, including Greenpeace and leading scientists, have warned for years that without urgent action - the bluefin will disappear. The Med region’s bluefin fishery must be closed immediately to allow bluefin tuna time to recover from decades of overfishing. This decline has been predominately caused by the purse seining method of fishing.

The failure of the latest meeting of the Convention on International Trade in Endangered Species (CITES) to declare a ban on sales of this type of tuna has made the situation even worse. The European governments along with Japan know well that there is abundant and unquestionable evidence of overfishing - yet they once again put shorterm profits before logic.

We are trying to shut down this fishing operation to protect our oceans and the future of the bluefin tuna. We are taking action where politicians and fisheries managers refuse.

And we will continue to take non-violent action at sea throughout the rest of the Mediterranean tuna fishing season which ends on June 15.

Greenpeace is demanding that the bluefin quota for the Mediterranean Sea be set to zero and that fishing operations targeting the species end immediately. Additionally, the bluefin spawning grounds, like the Balearic Islands, must be set aside as part of a larger network of protected marine reserves to put the bluefin on the road to recovery.

According to the assessments of the International Commission for the Conservation of Atlantic Tunas (ICCAT), the current Atlantic bluefin tuna population is less than 15 percent of what it was before the beginning of industrial fishing activities (purse seining). If current fishing rates continue, the bluefin could disappear as a commercial species in just a few years. Globally, over 90 percent of large fish, such as tuna, have disappeared from our oceans, and some scientists warn that all commercial fisheries could collapse in the coming decades. We are demanding that oceans management - including the Mediterranean - be reformed to include a fully-protected network of marine reserves covering 40 percent of the world's oceans.

We are acting peacefully to ensure healthy oceans and ample fish stocks for future generations. And we intend to peacefully confront Mediterranean bluefin fishing vessels in order to get the bluefin off the pathway to extinction and instead put our oceans on the road to recovery.

Greenpeace is campaigning for a global network of marine reserves - areas of ocean off-limits to fishing, mining, drilling and other extractive activities - to cover 40 percent of the world’s oceans, including the Mediterranean. This is a necessary step to restoring our oceans and fish stocks back to health. 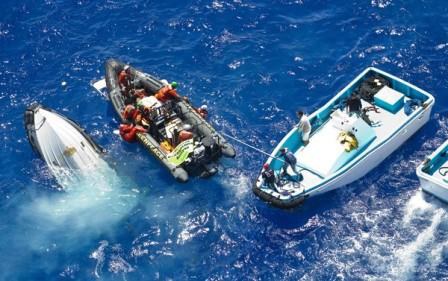