Anti-nuclear protest at RIo TInto AGM in Melbourne - 26 May

Energy Resources Australia (ERA), the company responsible for the Ranger uranium mine recently revealed to have leaked millions of litres of radioactive water into the World Heritage-listed wetlands of Kakadu National Park (http://www.theage.com.au/environment/conservation/mine-fears-grow-as-pol...), is a subsidiary of Rio Tinto, which held its AGM in Melbourne today. In spite of extremely short notice, protesters joined Ziggy the anti-nuclear white elephant outside the Melbourne Convention Centre to voice their outrage at this latest case of contamination and to send a message of support for the Mirrar traditional custodians, who oppose the expansion of the Ranger Uranium mine.

The protest was organised by Friends of the Earth ACE (Anti-nuclear and Clean Energy) Collective, and some of those attending were just back from the annual Radioactive Exposure Tour - see http://www.melbourne.foe.org.au/?q=an/home and http://www.foe.org.au/anti-nuclear/issues/oz/radtour/2010 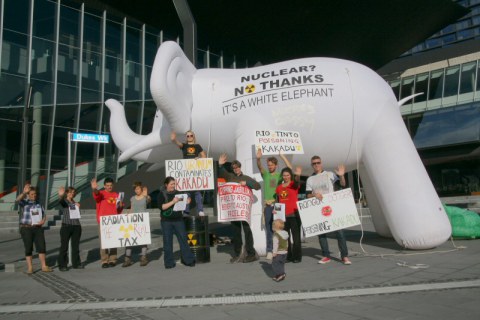 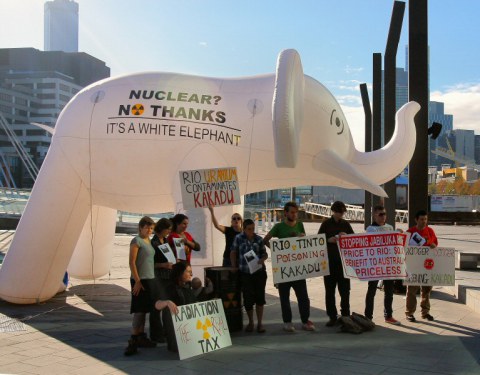