Some of the people arrested at last September's civil disobedience at Hazelwood Power Station faced court today with supporters.

Hazelwood protesters were due to face court this morning and and appeared with supporters outside the court to show solidarity and hand out leaflets to passers-by explaining the urgency of the need to close this, the 'most polluting power station in the world', and setting out the role of civil disobedience in the campaign.

An update on court proceedings will be posted here as soon as available.

33 people in all were arrested, so further actions may be expected; there is also to be a mass protest at the station itself on 3 October, details to be posted on the Switch off Hazlewood site ... 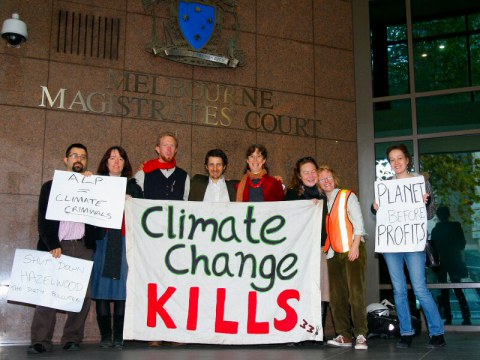 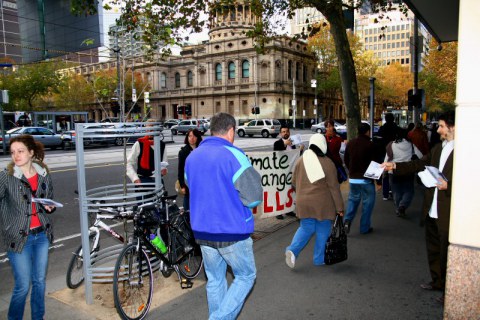 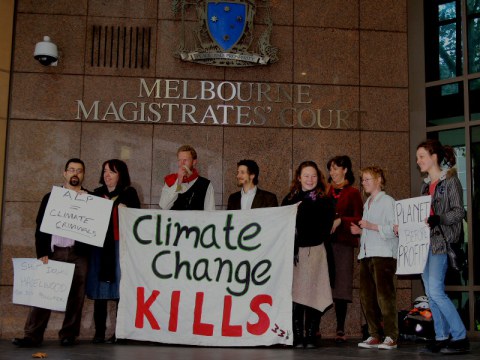 All five of the Hazelwood Arrestee’s who faced court today charged with trespass at Hazelwood Power Station, received fines of $200 with no convictions recorded. The crime of trespass states that you enter a property without excuse or authorisation. Four of the cases were heard by the one magistrate who conceded that the accused had “an excuse” but not authorisation to enter the Hazelwood power plant. The fifth defendant’s case was heard as a Diversion. He was able to donate his $200 fine to Friends of the Earth and he also received a three month good behaviour bond. Earlier in the week another Hazelwood arrestee pleaded guilty and received a fine of $100 which they were able to donate to an environment group of their choice. They also elected to donate the money to Friends of the Earth. Thanks to all those who came along today to show solidarity in court, it made it a much more empowering day for all involved. On a different note, it is worth mentioning the relatively large police presence at today’s solidarity demonstration. There were at least 8 police officers and a number of other extra security. At least one member of the Security Intelligence Unit attended the demonstration and then the court hearing itself. Therefore there were at least as many members of the state security services as protestors