Diverting attention from addiction to coal

While Kevin Rudd announced a crackdown on tobacco advertising and increased sales tax on cigarettes, attention was diverted from the elephant in the livingroom: climate change and addiction to coal. At the same time Friends of the Earth Australia denounced the development of two new coal export terminals near Bowen in North Queensland, insisting the expansion of Queensland's biggest contributor to climate change must come to an end. Adding an extra $2 sales tax a pack to cigarettes is a diversion from the real problem: Australia's multi-billion dollar addiction to coal. What Kevin Rudd needs to do is put a $35 per tonne carbon levy on coal to send a significant message to business and the public on climate change and public health.

Related: Punishing the people who stand up for the common good | Conservationists and scientists angry at Rudd retreat on climate | Crikey: Pity the coal lobbyists are more powerful than the tobacco lobbyists

“The Queensland Government needs to be planning it's exit strategy from the coal industry rather than planning new coal ports and mines” said Eleanor Smith, Spokesperson on coal for Friends of the Earth Australia.

“All over Queensland, communities are opposing the construction of new coal mines and infrastructure. The many environmental, health and economic impacts of the coal industry has led to these communities calling for a transition away from coal production and export in this state. Just one of these impacts if the industry's huge contribution to climate change.”

Friends of the Earth said that environmental assessments of proposed new coal terminals near Bowen should include the cumulative impacts of coal mining in Queensland and subsequent carbon dioxide emissions factored into these assessments when they are undertaken.

“If the real costs of coal mining were taken into account, including the costs of climate change both now and for generations to come, the Queensland government would realise that we can no longer afford to be the world's coal quarry.”

Queensland is Australia's largest exporter of coal with 185MT leaving the shores last year. The two coal terminals planned for Bowen, combined with planned expansions at Abbot Point, Mackay and Gladstone will see Queensland's exports double in the next decade, according to Friends of the Earth.

More information on Coal and Queensland from Six Degrees 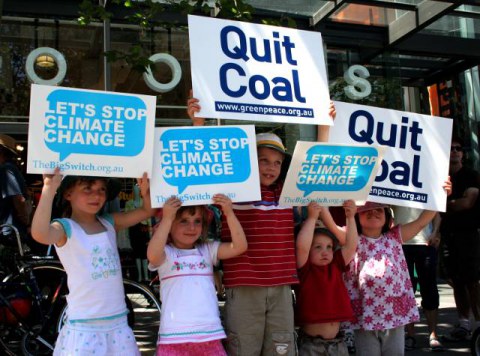 So you're against coal being exported to developing countries so that they can develop and feed their starving childrins? Or would you prefer a slow roll out of windmills and solar panels over 50 years while generations starve to death in poverty and misery.