Conservationists and scientists angry at Rudd retreat on climate

Conservationists and scientists have reacted angrily to the breathtaking act by the Rudd Government in taking the emissions trading scheme - the Carbon Pollution Reduction Scheme - of the legliative agenda for two to three years, delaying central action on climate change - the setting of a carbon price.

The Getup organisation have launched a public No confidence vote saying that Kevin Rudd has lost the courage of his convictions. He needs to hear loud and clear that he just lost our confidence as a result.

Professor Ove Hoegh-Guldberg, Director of the Global Change Institute at the University of Queensland, warned that urgent action is needed today not tomorrow. "Over 95% of the world's most credible scientists are telling us that we are fast approaching the point in which Australia's future, and that of the rest of the world, will be in extreme jeopardy. It is a shame that the government has failed to move forward and has had to back down on this issue due to the antics of the opposition. It seems that the latter would rather play politics than secure a future for our nation and its children."

He also drew attention to the fact that Australia supplies the world with 30% of its demand for coal, and posed the question of what firm action is the government going to take to deal with carbon emissions which are continuing to grow?

Australian Conservation Foundation (ACF) executive director Don Henry said “To put comprehensive climate action in the too-hard basket until 2013 would be bad for the environment, de-stabilising for business and totally unacceptable to the millions of Australians who want government leadership on climate change. We need leadership from Government and Opposition on an issue Prime Minister Kevin Rudd has described as the great moral and economic challenge of our time."

Professor Andrew Blakers, Director of the Centre for Sustainable Energy Systems and of the ARC Centre for Solar Energy Systems at the Australian National University, Canberra, called for greater action by the Government in other climate change mitigation areas, particularly tightening of minimum energy performance standards for all products and buildings and increased funding of research and development of low-carbon technology, in particular solar, geothermal and wind.

Professor Ian Lowe warned that Australia needs to reduce carbon emissions by 25 to 40 per cent by 2020 “The science tells us that global emissions must start trending down within a decade to have an acceptable chance of avoiding dangerous climate change...If we don't start until 2013 and allow further growth in the intervening period, the rate of change looks alarming.

Professor Lowe proposed that the Government could introduce a carbon tax as an interim measure. "If there is not to be an ETS, there have to be other measures, like a serious target for renewable electricity. While the government can't get an ETS through the Senate, it could introduce a carbon tax in the Budget with an undertaking to increase it each year until an ETS is legislated. That would give business some confidence to invest as well as providing a price signal to drive change.”

“The truth is that every year of delay means the actions finally taken will either be a little more painful, or a little less effective. It is a similar situation to what is faced by someone with diabetes, high blood pressure or some other problem who is resisting making the lifestyle changes urged by his doctor. The patient may be lucky and not experience anything too bad even if he does relatively little, but his chances of serious problems and/or expensive/nasty treatments grow the longer he waits. This will still be true for climate, if in 2030, we are still sitting around wondering whether to listen to the scientists or just continue hoping for the best.” said Professor Steven Sherwood from the Physical Meteorology and Atmospheric Climate Dynamics at the Climate Change Research Centre, University of New South Wales.

The decision to delay an emissions trading scheme was blamed on the lack of progess on an international level and the Coalition's blocking of the bill in the Senate, but the reality is the Government did not want to negotiate their deeply flawed scheme with the Greens who have proposed a two year Interim Carbon Tax as a compromise to break Senate Deadlock.

The release of the Grattan Institute report on April 22 - Restructuring the Australian Economy to Emit Less Carbon - was the final nail in the coffin of the CPRS. "The assistance package under the Government’s proposed carbon trading legislation for emissions intensive industries is a $20 billion waste of taxpayers’ money", said the CEO of Grattan Institute Professor John Daley on the release of the report. He concluded that, “Concerns that a carbon price will devastate industry and households are misplaced and exaggerated. They are no basis for delaying adapting the Australian economy to its carbon constrained future.”

So we are left with a Government lacking in leadership, still sucking up to the coal industry and other industrial carbon polluters, unwilling to take the hard decisions on climate, and still reeling from a home insulation program that was run primarily as a job creation program without adequate oversight and risk management of industrial safety in insulation installation.

The opposition parties provide no alternative as their Climate Policy is just "tinkering at the edges" say academics and scientists.

New polling at the end of March commissioned by The Climate Institute, GetUp and other partners shows more than two thirds (68%) of Australians are concerned about climate change, but neither the Liberal or Labor party are showing the necessary leadership on the issue to boost their voter support.

Trust in Kevin Rudd to manage climate change has slid from 46% in February 2009 to 36%. “The Prime Minister has paid the price of community disappointment and frustration on stalled progress, but this poll shows there is more to be gained by all political parties with returned attention to action,” said Simon Sheikh, National Director of GetUp.

In the poll most Australians, 55%, see little difference between the major parties in managing climate change. 27% rate Labor as the better party to manage climate change – the same as one year ago. The Coalition has gained 4% from a year ago to 18% on the same measure. 35% of voters would be more likely to vote for the Rudd Government if they were to take stronger action on climate change; only 16% would be less likely.

“Climate change remains a potent force rewarding stronger action,” said John Connor, CEO The Climate Institute, “Clearly the great majority of people don’t support a head-in-sand approach to climate change and even some of those genuinely sceptical or confused by the issue realise the importance of prudent risk management,” said Mr Connor. 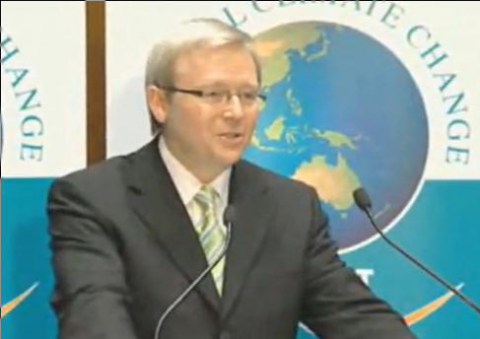