Climate activists held a picket outside the ministerial offices of Peter Batchelor, Victorian Minister for Energy and Resources, at 1 Spring Street, highlighting his attendance at a $3000 a head Victorian Coal and Energy Conference meeting at Taralgon in the La Trobe Valley and the Brumby Government's continued in-action on climate change and support for the coal and fossil fuel industry at the expense of developing the renewable energy industry. See Photos and speech transcripts

The gathering, organised by the Melb Uni Climate Action Working Group (CAWG), was addressed by Brian Walters, a prominent Melbourne senior counsel and civil liberties advocate and a candidate for the Greens in the upcoming State election, Peter Marshal from the United Firefighters Union, Dr. Jim Green and Madeline Hudson from the Friends Of the Earth Anti-nuclear and Clean Energy Campaigns, Mark Ogge from Beyond Zero Emissions, Chris Breen from Solar Systems Campaign, and Damien Lawson from the Victorian Climate Action Centre.

Brian Walters called the Federal Government's Carbon Pollution Reduction Scheme (CPRS) as scandalous and that it was worse than nothing at all. Being a lawyer he was scathing about how the scheme enshrines carbon pollution as property rights.

"One of the things about this scheme which I'm not sure has had much coverage, but in my view is the worst part of the scheme, is that it makes it impossible for future Governments to ratchett up the targets. That's because under a section of the legislation the carbon pollution permits, won't just be permits, they will be property rights." he said.

Modeling by the government’s own Treasury Department confirms that the CPRS will not force a single coal-fired power station to close, or reduce emissions until 2035—not even close to the paltry 5% emissions reduction target set by the government.

Peter Marshal, representing the state's firefighters, had a very pointed message regarding the priorities of Labor Governments in power. "The question for Mr Batchelor, for Mr Brumby and Mr Rudd, and I say this as a staffer of a union that has been affiliated to the Labor party for over 100 years almost, is are you prepared to increase the risk on working people in this state, particularly firefighters, but also threaten the future of future generations?"

Chris Breen from the Save Solar Systems campaign highlighted the lack of action in supporting renewables while more ephemeral activities are directly funded.

"People tell you that Governments don't do things directly anymore, but they do. The same week that Solar Systems was sold the Brumby Government gave $363million to build a new roof for the tennis centre directly. That is about the cost of the Mildura Solar power plant. Nothing against tennis, but what's more important? That we have a planet on which to play tennis or that we have a roof on the tennis centre?" said Chris Breen.

Damien Lawson from the Climate Action Centre pointed out that under John Brumby's watch in the last decade emissions from burning brown coal in Victoria went up 10 per cent and called for the closure of Hazelwood power station, the most polluting station in Australia.

"It is the dirtiest power station in Australia. It puts over 17 million tonnes of carbon pollution into the atmosphere. It is the biggest single emitter of dioxin in Australia. It's an industrial dinosaur from decades and decades ago. It was built, actually one of the people who built it was my grandfather, in the 1950s and 1960s and it was due to be closed in 2005. But John Brumby and the Labor Party decided to keep it open. But this year we have a window of opportunity, and the window of opportunity is this election and the fact that the public is clamouring for real action on climate change." Damien Lawson told the crowd.

Dr Jim Green and Madeline Hudson spoke on the perils and problems of nuclear power and waste disposal. Mark Ogge from Beyond Zero Emissions outlined how we can move to a zero emissions society.

The picket had the additional audience of uniformed police guarding the building as well as members of the mounted police. But all was peaceful, and just before 2pm the picketers dispersed to a meeting in the Treasury Gardens, work or other activities. 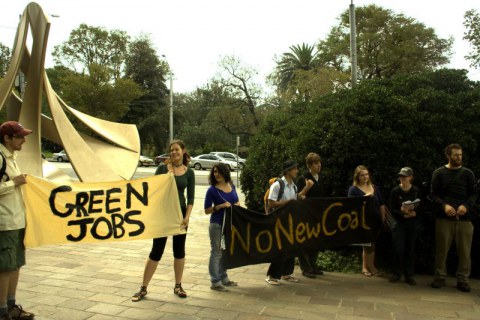 There is a report also on Melbourne Protests - http://melbourneprotests.wordpress.com/2010/03/31/picket-at-office-of-vi... - including links to edited footage of the speeches on EngageMedia - http://www.engagemedia.org/Members/pc/videos/batchelor-29march.mp4/view and http://www.engagemedia.org/Members/pc/videos/batchelor-29march-part2_tra...