Earth hour has grown from just one city - an estimated 2.2 million people participated in Sydney in 2007 - to 50 million people in 400 cities around the world in 2008 and even more in 2009. In 2010 more than 1,000 cities and towns in 120 countries around the world will, at 8.30pm on Saturday, March 27 turn off the lights for Earth Hour. It is a symbolic event that has been tirelessly promoted by the WWF to promote action on climate change. While its impact by itself is somewhat negligible, although there is a noticeable power use reduction for the hour, it has increased general public awareness of energy use and it's contribution to climate change.

Lighting on 100 iconic landmarks will be turned off this year including the world's three tallest buildings - the new Burj Khalifa in Dubai, CN Tower in Toronto and Taipei 101 in Taiwan. Around Australia the lights will go off on Melbourne's Luna Park, Rialto Tower, Arts Centre and Crown Casino; Brisbane's Story Bridge; Adelaide's Town Hall and Rundle Mall Lantern; The National Library and Australian War Memorial in Canberra and the Sydney Opera House, Sydney Tower, Harbour Bridge and Luna Park will join this growing list.

Earth Hour Co-Founder and Executive Director, Andy Ridley said "The C40 suggests that cities are responsible for up to 75% of the world’s carbon emissions, so their role in addressing what is unequivocally the greatest threat to the planet today is absolutely vital," Andy said. "By turning the lights off for Earth Hour, cities are reflecting the aspirations of their citizens as a community that has resolved to take action on global warming," he said.

But the climate change deniers are also organising. The American free-market think-tank, the Competitive Enterprise Institute established the 'Human Achievement Hour' last year to combat the climate change environmental message of Earth Hour. In Australia, the Conservative Leadership Foundation, founded and chaired by Liberal Party Senator Cory Bernardi, is promoting the event. (The Age Mar 24, 2010 - Call to turn on the lights)

The Competitive Enterprise Institute receives funding from oil and energy giant Exxon, which also funds other climate denial organisations such as the American Enterprise Institute, the Heartland Institute, Frontiers of Freedom and the Hoover Institute. ExxonMobil has funded a total of 70 groups running the campaign against climate science.

Since 1996, the Competitive Enterprise Institute has been intent on developing the campaign against climate science in Australia. In August 1997, the CEI and the Frontiers of Freedom front group sponsored a conference in Canberra, with the Australian and New Zealand Chambers of Commerce and the Western Mining Corporation (WMC) in attendance.

According to a recent Greenpeace report - Dealing in Doubt:

In August 1997, the CEI and the Frontiers of Freedom front group sponsored another conference, this time in
Canberra, Australia, along with the Australian and New Zealand Chambers of Commerce and the WMC. Ray Evans and WMC’s Managing Director Hugh Morgan played a significant role at the conference, and attendees included the Australian Deputy Prime Minister Tim Fischer and Environment Minister Robert Hill. Fisher claimed that tough emission reduction targets could put 90,000 jobs at risk in Australia and cost more than $150 million."

According to RJ Smith from the CEI, the purpose of the Canberra conference was to ‘try and buck [Prime Minister John Howard] up a little more and let him know that there is support of the American people’ for his government's obstructionist stance.

Later that year, an Australian at the CEI, Hugh Morley, noted on the CEI’s website that ‘If Australia sticks to its gun [sic], there might not be a Kyoto treaty after all’.

The Australian denial movement, funded by the WMC and other big business groups, and led by the Institute of Public Affairs, has had a relationship with the US climate sceptics ever since. Meanwhile, Australia has adopted a weak climate policy, only signing the Kyoto treaty after the Howard administration lost power in 2007.

The Competitive Enterprise Institute has a history of attacking climate science and the IPCC reports. This year, on 16 February 2010, the Competitive Enterprise Institute, along with Fred Singer, filed a lawsuit to the US demanding that, on the basis of the hacked emails and so called ‘flawed datasets’, the EPA drop all its proposed regulation on CO2 and other greenhouse gases.

In 2009 an International investigation by journalists revealed a multinational fossil fuel campaign to undermine Copenhagen talks.

So what is in it for these guys (and they are predominantly male)? Short term profit from mining, energy use while the world goes ever so slowly to hell.

The mining and energy sector is facing a similar public relations battle to the tobacco industry which consistently hindered research, ran public relations campaigns against legislative changes. The energy and mining sectors have learnt from the tobacco industry, with a far better funded and more vociferous campaign, including intensive lobbying and buying off our politicians for minimal action. The political decisions that do get through have amounted to exercises in greenwashing.

But the stakes are also much higher with climate change, with major changes to Earth's climate being delayed by the enormous inertia in the system. Australian Scientists have affirmed Australia's climate is already changing, climate risks of sea level rise for Australia, Marine Scientists call for climate action over Ocean Warming and Marine extinction looms with ocean acidification increasing. A new study of the Greenland ice cap shows we may be closer to a major climate tipping point and major sea level rise. Another climate tipping point is Global Atmospheric Methane on the rise.

We only have to look at the way Queensland climate change minister spins climate destruction of Great Barrier Reef, or the Queensland State Labor Government approved development of the World's largest coal mine.

In Victoria, the power industry is dependant on burning brown coal, one of the most intensive CO2 fuels, with a campaign to switch off the Hazelwood Power station, one of the most inefficient and polluting in the world. International Power, the owner of Hazelwood, enjoyed the privatised profits but is now looking at socialising the costs.

So who is for turning out the lights for an hour from 8.30pm on Saturday 27 March as a public demonstration of action on climate change?

Late on Saturday Minister for Climate Change Penny Wong released a statement saying that all Australian Government agencies that report their energy use have registered to participate in Earth Hour this year. These 126 agencies cover more than 4100 Government sites and more than 6 million square metres of floor space. Sites include the High Court, Parliament House, Australia’s Casey Station in Antarctica and more than 88 Australian embassies and posts around the world.

Senator Wong said the success of events such as Earth Hour showed how important the environment was to Australians, and to people around the world. “All Australians need to do their bit in reducing their carbon footprint,’’ Senator Wong said. “The Australian Government is doing its bit by turning out the lights at Government agencies across the country – including at some of our iconic sites such as Old Parliament House and the Australian War Memorial. Earth Hour is an important event because it raises public awareness of the importance of energy efficiency – in the home and the workplace."

We are still waiting for the Australian Government to stand up to the fossil fuel industry and introduce a carbon pollution reduction scheme that actually reduces emissions by an appreciable amount by 2020.

The Rudd Government currently promises cuts of 5% on 2000 levels with it's CPRS scheme. This cut equates to a 12.9% increase of emissions on 1990 levels. But they fudge these figures further by including land use and forestry targets and financing the reduction in deforestation in third world countries to offset emissions. This will allow Australia's emissions to actually increase even more until 2030. 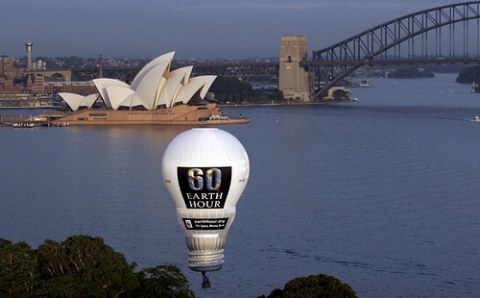 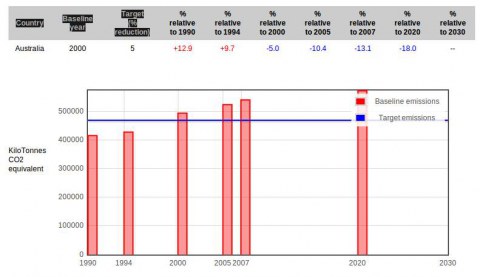 Re: Global public embraces Earth Hour for action on climate ...

It's a good thing that lots of people now across the globe are participating Earth Hour. Climate change is one of the environment problem that we have nowadays. A complete doofus could do something for Earth Hour – all you have to do is turn off all the lights and appliances (within reason – I'm not turning off the fridge, that's just stupid) or not drive a car from 8:30 pm to 9:30 pm on the 27th of March. That's pretty simple. Think of it as making payday loans out to the Earth – if it actually does help offset climate change or global warming, then it isn't as if it hurts you to do it. Heck, turning the lights out may even encourage people to do something fun with the spouse that doesn't revolve around American Idol.