CITES (Convention of International Trade in Endangered Species) has failed to agree to any measures to protect endangered Atlantic bluefin tuna, which is heading for commercial extinction due to overfishing caused by Japanese market demand and consumption for sushi and sashimi. Japan's Prime Minister has welcomed the vote against the Bluefin Tuna ban.

Speaking from the meeting reporting from Doha, Qatar on March 18 2010, Greenpeace International oceans campaigner Oliver Knowles said: "The abject failure of governments here at CITES to protect Atlantic bluefin tuna spells disaster for its future and sets the species on a pathway to extinction. The failure of countries to support proper protection for Atlantic bluefin tuna means business as usual for those whose only interest in the species is short –term profit. It leaves the future of the species in the hands of the International Commission for the Conservation of Atlantic Tunas, the very organisation responsible for the dire state of bluefin tuna stocks today."

Related: Overfishing: Bluefin tuna crashing toward extinction | Greenpeace: Save our Tuna | Youtube video: What's in your can of tuna? | UK IMC: Battle for Bluefin Looms as Ban Fails

He accused Japan of kicking an own goal "By pushing for a few more years of this luxury product it has put the future of bluefin, and the future of its own supply at serious risk." he said condemning the failure of the CITES parties to act.

The issue was forced to an early vote when Libya tabled a motion to close the debate early. The majority of parties agreed to this which meant the proposals were voted on immediately. Both the European Proposal for Appendix I listing with amendments and Monaco’s orginal proposal for straight Appendix I listing were voted down. The vote followed several days of aggressive lobbying from the Japanese, who take close to 80% of the catch Atlantic Bluefin for use as sushi.

“After overwhelming scientific justification and growing political support in past months – with backing from the majority of catch quota holders on both sides of the Atlantic – it is scandalous that governments did not even get the chance to engage in meaningful debate about the international trade ban proposal for Atlantic bluefin tuna,” said Dr Sergi Tudela, Head of Fisheries at WWF Mediterranean and observer at the CITES Conference of the Parties in Doha.

According to Greenpeace, the latest available science shows that to have only a 50% chance of stocks recovering by 2023 then an annual eastern Atlantic catch limit of 8,000 tonnes would need to be imposed. Despite repeated calls for the closure this fishery, the European Community, Mediterranean fishing states and Japan forced a new catch level set at 13,500 tonnes, from the current 19,950t.

“Yet again, ICCAT has failed to give bluefin tuna any chance of recovery. It has also confirmed that fishing states are unable to enforce their own control measures or seriously address their fishing fleet’s overcapacity,“ said François Provost, Greenpeace International oceans campaigner in November 2009. “A ban on international trade in Atlantic bluefin tuna is now the only remaining chance to save the iconic fish from commercial extinction”.

“It is now more important than ever for people to do what the politicians failed to do – stop consuming bluefin tuna,” Dr Tudela said.

In January 2010 the Sea Shepherd Conservation Foundation announced a Mediterranean Campaign for the Bluefin Tuna. Both the Steve Irwin and the Bob Barker are about to sail for the Mediterranean after the successful campaign hindering the 2009/2010 Japanese whaling season in the Southern Ocean Whale Sanctuary. 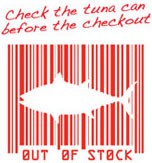