Widow calls for lawyer to be disbarred over cycling death

Earlier this week Lawyer and former police officer Eugene McGee and his brother Craig Patrick McGee were found not guilty of conspiracy to attempt to pervert the course of justice. They had been accused of conspiring to avoid police after a fatal collision on the Kapunda Road, just north of Adelaide, in 2003. Cyclist Ian Humphrey, 46, was killed when he was hit from behind by Eugene McGee's four-wheel-drive.

The verdict means the only penalty Eugene McGee will ever face for hitting and killing cyclist Ian Humphrey in 2003 - and then avoiding police while he returned to Adelaide - will be a $3100 fine for driving without due care. The McGees walked out of court as free men shortly after the verdict.

Di Gilchrist, the widow of Ian Humphrey, attacked the former police officer accusing him of profiting from killing Humphrey "He is actually profiting from the experience and the stigma that the case has afforded him," she said. "Law is a professionally based system and here we have this man practising law after killing someone and fleeing the scene for whatever reason. I find it amazing, but not surprising."

Legal websites boast of McGee's expertise in driving matters, according to the Advertiser report.

Gilchrist has called for McGee to be disbarred from practicing law. "Law is a professionally based system and here we have this man practising law after killing someone and fleeing the scene for whatever reason. I find it amazing, but not surprising." she was reported as saying by the Adelaide Advertiser.

Wheels of Justice cycling organisation has released the following statement:

Has justice really been seen to be done?

The acquittal of Craig and Eugene McGee in the District Court of South Australia of a Charge of Conspiracy to Pervert the Cause of Justice clearly exposes serious defects in the law in this country concerning the death of vulnerable road users and the ability of those with knowledge and experience of the law to fully exploit the system to avoid responsibility for their actions beyond a smack on the wrists.

Judge Herriman as the sole arbiter of fact in this final prosecution had to apply the law as it now stands, however the acceptance that clearly unlawful acts by the defendants in evidence raises the ire of the public and causes many commentators to demand reform if this is in fact a proper interpretation of the law by this Judge.

The actions of Eugene McGee in leaving the scene of an accident where a person is clearly either deceased or seriously injured, then spending valuable time in multiple mobile phone calls to his family and lawyer, which time could have been used to assist the injured person, and Craig McGee’s lying to police and acting to avoid disclosure of Eugene McGee at a police road block are indicative of the motivations which drove the McGee brothers to incur this charge.

In most reasonable minds these are items which on the evidence go beyond reasonable doubt to allow a court of fact to convict.

What is glaringly obvious is the weight this court put to erode that finding and direct the judge to allow greater weight to possible dissociative mindsets of Eugene McGee and Craig McGee’s filial duty to his brother in full knowledge of the tragedy Eugene McGee’s failure as a driver had caused.

The primary issue is that Eugene McGee had a clear and undistorted knowledge of the law on driving whilst intoxicated and how to deal with the consequences of that should a collision or death arise. It is akin to a professional boxer knowing how to inflict the utmost damage having liability to anyone they meet in a street fight.

The weight of this knowledge and capacity known to Eugene McGee and the fact he also added to his understanding of his position by speaking to a lawyer almost immediately after leaving Ian Humphrey dying on the roadway reinforces that view.

We trust not only will the DPP of SA appeal on the basis the Judge erred in law, but that if it is required the SA Government whichever it is after this Saturday makes rapid reform of the law to ensure those in special positions of knowledge and experience and especially those in close relationship with the legal profession have a greater standard in their defence of criminal charges than the general public.

This decision does not show Justice as being seen to be done.

His honour’s judgment whilst lengthy is short on explanation of acceptance of the unlawful acts of the defendants as lawful. His Honour was clearly aware of Eugene McGee’s knowledge and experience in legal practice and alluded to the clear awareness of Eugene McGee’s high knowledge of the law on the circumstances of this tragic collision and the events leading up to it and within 6 hours after it.

Such knowledge should have carried much more weight than has been accepted and should have clearly been such as to reject any raising of a reasonable doubt in the judges mind over other circumstances the defendants may have raised in their defence.

The fact the defendant Eugene McGee could not be examined under oath is also a failing of the system in this instance due to the special knowledge of the law by Eugene McGee.

Sadly this case may never have Justice applied to it. Some reform has come from the report of the Royal Commission especially regarding leaving the scene of a collision where injuries have occurred. But it is not enough.

We hope the Wheels of Justice keep turning and bring this matter to a truthful conclusion, as so far it is clear to most reasonable parties as stated in the SA and national press by reporters and commentators that the findings of fact by the SA District Court to these charges are not aligned with the truth of Eugene and Craig McGee’s conduct. 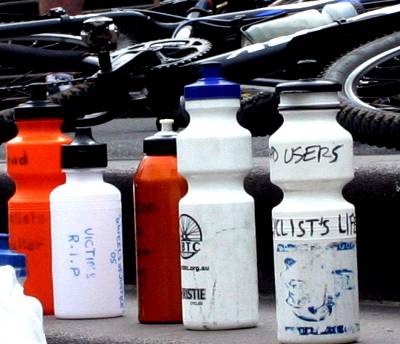 Re: Widow calls for lawyer to be disbarred over cycling death

So if this wommen wants Justice why has she not put a head stone on her husbands Grave,

Re: Widow calls for lawyer to be disbarred over cycling death

di
i have just finished watching the second part of australian story ,i am so sorry that we as a society have let you down so badly ,i am so ashamed to be part of a society that can so blatantly bend the law to allow persons to avoid due justice ,i am pleased to note that you have found new love and you have two obviously supporting and loving daughters and i hope that in the future you will have the love ,as we do the joy of grandchildren, wishing all the best for the future