In a joint statement released on Monday by the CSIRO and Bureau of Meteorology the stark facts on global warming were outlined: that Australia's climate has already changed with more extremely hot days, fewer cold ones, wetter in the north and drier in the south-east and south-west. The statement outlined in five sections a snapshot of temperature, rainfall, oceans, atmosphere, and what this means for Australia in coming decades.

At the launch of the statement Dr Greg Ayers, Director of the Bureau of Meteorology said that climate change is real with impeccable data being collected for more than 100 years: “Australia holds one of the best national climate records in the world,” Dr Ayers said. "It’s there for anyone and everyone to see, use and analyse.”

CSIRO Chief Executive Dr Megan Clark said “With this snapshot, Australians will be better prepared for the next step of planning for how to adapt to a changing climate and how to also take action to reduce the impacts of climate change. CSIRO has been working with industry and in sectors of the economy such as agriculture to prepare for and implement necessary changes.”

The veracity of human caused climate change has been under attack from climate sceptics and denialists in recent months. Professor Peter Coaldrake, Chair of Universities Australia, commented that "Climate science has taken the brunt of the attack. Now is the time to stand up for the quality of Australian science and research and to emphasise the need for evidence-based policy outcomes that recognise the lessons from science." he said about the statement which "confirms the clear view of top Australian scientists, expert in the field, that Australia’s climate is changing."

The statement details that the mean temperature has increased by 0.7 degrees from 1960 to 2009, but with some areas experiencing 1.5 to 2 degrees of warming. The greatest warming has ocurred during spring - a mean average of 0.9 degrees.

While annual rainfall has remained stable averaged out across the continent, there is a strong trend for more rain in central and northern Australia, and less in the southwest, south, southeast, and east coasts, where much of the population is located.

The oceans of the world currently absorb about 25% of the human generated carbon emissions resulting in ocean acidification. Carbon dioxide is more easily dissolved by cold water - shelled marine life are particularly under threat in the Southern Ocean and the Arctic with far reaching implications for the whole food chain, ocean ecology and biodiversity threatening a major marine extinction.

The Cape Grim baseline air pollution station, operated jointly by CSIRO and the Bureau of Meteorology
in an isolated spot on north-western Tasmania, provides vital information about changes to the atmosphere in the Southern Hemisphere.These air pollution stations tend to be isolated from urban areas to avoid industrial contamination. Similar stations are based at Baring Head near Wellington, New Zealand, and on top of Mauna Loa, Hawai. The data from Cape Grim shows atmospheric CO2 increasing to 386ppm in 2009. Atmospheric methane, an even stronger greenhouse gas, is also increasing.

Over the last 50 years each decade has been warmer than the one before, with 2000 - 2009 being the warmest decade on record with Australia's Climate sizzling.

So what are the projections for the future? An average temperature rise by 0.6 to 1.5 ºC by 2030. If global greenhouse gas emissions continue at business as usual levels, warming is projected to be in the range of 2.2 to 5.0 ºC by 2070. Temperatures will be moderated near the coast and in Tasmania and higher in central and north-western Australia. Most of this temperature increase will be felt through an increase in the number of hot days. Expect less rainfall southern areas of Australia during winter, in southern and eastern areas during spring, and in south-west Western Australia during autumn. An increase in the number of dry days is expected across the country. It is likely that there will be an increase in intense rainfall events in many areas, like the one in March which extended from Northern Territory to Victoria, including a major hail storm.

Now we just need action to curtail carbon emissions while the Federal Government continues to push it's amended and flawed CPRS scheme and the Opposition it's pitiful direct action plan. Both clear examples of talking green and doing next to nothing - greenwashing - while State Governments continue to subsidise polluting electricity generators, coal export and development of new mines such as the World's largest coal mine: the Waratah Coal Galilee mine in central Queensland. 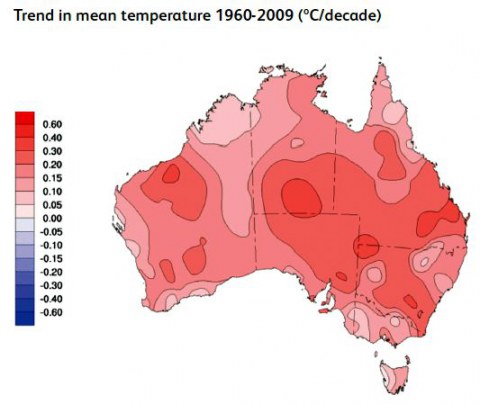 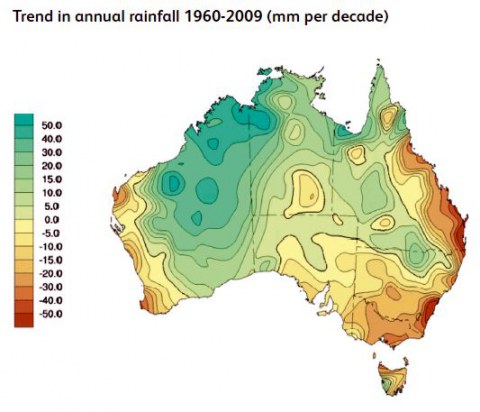 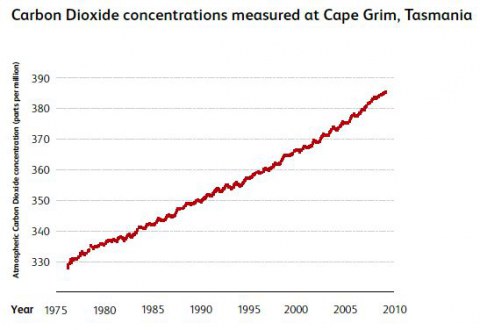