Scientiists from Bristol University say that ocean acidification is ocurring at a faster pace than anytime in the last 65 million years, raising the possibility of a mass marine extinction event similar to what ocurred about 55 million years ago.

The research has been published in Nature Geoscience with report author Dr Andy Ridgewell describing the impact "This is an almost unprecedented geological event,"

The oceans are a major carbon sink currently absorbing about a quarter of the CO2 released into the atmosphere, but forcing the pH of the surface ocean lower in a process called 'ocean acidification'.

The researchers applied a model that compared current rates of ocean acidification with the greenhouse event at the Paleocene-Eocene boundary, about 55 million years ago when surface ocean temperatures rose by around 5-6°C over a few thousand years. During this event, no catastrophe is seen in surface ecosystems, such as plankton, yet bottom-dwelling organisms in the deep ocean experienced a major extinction.

Dr Andy Ridgwell, lead author on the paper, said: "Unlike surface plankton dwelling in a variable habitat, organisms living deep down on the ocean floor are adapted to much more stable conditions. A rapid and severe geochemical change in their environment would make their survival precarious.

"The widespread extinction of these ocean floor organisms during the Paleocene-Eocene greenhouse warming and acidification event tells us that similar extinctions in the future are possible."

During the Paleocene-Eocene event changes ocurred over several thousands of years allowing adaption to occurr through migration towards the poles and evolutionary adaption. The current rate of change ocurring over several decades is unprecedented in the past 65 million years, and one that challenges the potential for marine calcifiers such as coal, and plankton to adapt.

The Nature Geoscience report abstract warns "In our simulation of future ocean conditions, we find an undersaturation with respect to carbonate in the deep ocean that exceeds that experienced during the Palaeocene-Eocene thermal maximum and could endanger calcifying organisms. Furthermore, our simulations show higher rates of environmental change at the surface for the future than the Palaeocene-Eocene thermal maximum, which could potentially challenge the ability of plankton to adapt."

Carl Zimmer writing in An Ominous Warning on the Effects of Ocean Acidification in Yale environment 360 reports that Ridgwell estimated that current ocean acidification is taking place at ten times the rate that preceded the mass extinction 55 million years ago . This rate of change may spell doom for many marine species, particularly ones that live in the deep ocean.

According to a Marine Climate Change reportcard released by Australian Marine Scientists in November 2009 "The level of atmospheric CO2 is now higher than at any time in at least the past 650,000 years, and probably has not been as high as present levels for 20 million years. The current rate of increase of CO2 in the atmosphere is one hundred times greater than the most rapid increases during major climate changes over the last 650,000 years. Approximately half the fossil-fuel CO2 emitted by man has now dissolved into the ocean."

Dr Will Howard, one of the contributors to the Australian reportcard said that "The impact of ocean acidification, a pervasive and persistent effect on the ocean, has only begun to be detected in nature in the last few years, and indeed most of the papers we cite date from the past year. A number of marine ecosystems of national and global importance, including the Great Barrier Reef and the Southern Ocean, are already feeling the effects of acidification."

Coral reefs are already under threat from increasing ocean temperatures and ocean acidification. Extinction of Coral reefs and 10-20% of marine species is likely if greehouse gases aren't brought down to 350ppm, warned Professor Ove Hoegh-Guldberg from the University of Queensland at a presentation during the Copenhagen climate talks in December 2009.

Scientists at the Australian Institute of Marine Science in Townsville claimed in January 2009 that coral on Australia's Great Barrier Reef reached a tipping point in 1990 with coral growth having slowed by more than 14 percent since then. At the current rate of decline, coral will be unable to grow by 2050, scientists warned in a 2007 scientific paper on Coral Reefs Under Rapid Climate Change and Ocean Acidification. 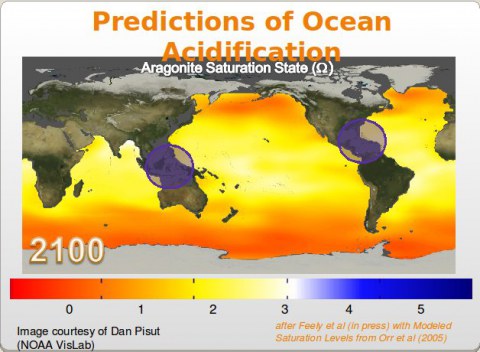