As the 6th anniversary of her son’s death approached, Gail Hickey called on supporters to make 14 February an International Justice for TJ Day (see below). Answering this call, the Indigenous Social Justice Association – Melbourne (ISJA-Melb) organised a rally at Fitzroy Town Hall attended by over 40 supporters, followed by a march to the local police station. Speakers included Talgium Edwards, a member of the stolen generation ‘with a long history of run-ins with police’ going back to the 50s;Cheryl Kaulfuss, who spoke on behalf of ISJA, of which she is a founding member; Vicki Roach, also a member of the stolen generations, long-term campaigner for prisoner rights, and mother of a son called TJ; Frank Guivarra, CEO of the Victorian Aboriginal Legal Service; and Sharon Firebrace of the Black Rights Action Group. MCs were Alison Thorne of ISJA and Karen Minnicone.

There is a fuller report of this event, with photos and some links, on Melbourne Protests weblog: http://melbourneprotests.wordpress.com/2010/02/17/international-justice-...

The 14th of February 2010 will be the 6th anniversary of the day my beloved son, Thomas “TJ” Hickey was impaled on a fence while being chased by Redfern Police.

And while the family grieves, the so-called Australian justice system has failed us miserably.

There is no doubt in my mind, and amongst many others in the Redfern Indigenous community and beyond, that the police killed TJ.

However, an internal police investigation was inherently incapable of finding the truth. It provided no incentive for vulnerable and threatened witnesses to come forward. The riot in response to my son’s death is a clear indication of the despair and lack of trust felt by our people of the State’s capacity to provide justice to us.

There was a similar response amongst the Palm Island community after the death in custody of Mulrunji.

There has still been no proper investigation independent of the police and government and I no longer believe that we can get to the truth within the Australian jurisdiction.

I am therefore seeking international remedies.

Under International Law, the State must ensure that deaths where police involvement is suspected are investigated by an independent civilian agency. Australia is currently in breach of its international obligations to ensure police are independently investigated.

In April 2009 the UN’s Human Rights Committee expressed concern about the excessive use of force by police against young people, Aboriginal Australians, people with disabilities and ethnic minorities. It also criticised the fact that investigations of police misconduct are carried out by the police themselves.

On 14 February 2010 I will lodge a complaint with this committee seeking findings that Australia is in breach of its human rights obligations in failing to independently investigate TJ Hickey’s death.

The failure to independently investigate deaths in custody is just one of Australia’s many human rights failings. The shameful intervention into North Territory Aboriginal communities and the back to the mission days welfare quarantining measures are another.

I therefore fully support the National Day of Action on 13 February against the NT Intervention.

I am calling for 14 February 2010 to be observed as International Justice for TJ Day.

I appeal for Deaths in Custody activists and justice campaigners to organise actions in their local areas on 14 February 2010.

Such actions will:
Remember TJ and honour his life
Insist that the police be held to account
Publicise the lodgement of my complaint with the UN Human Rights Committee
Demand the full implementation of all recommendations of the Royal Commission into Aboriginal Deaths in Custody
Build the on-going struggle to stop all Aboriginal deaths in custody and remember those who have died at the hands of the racist state, particularly in the last 6-years.
Until we have justice, there can be no peace. 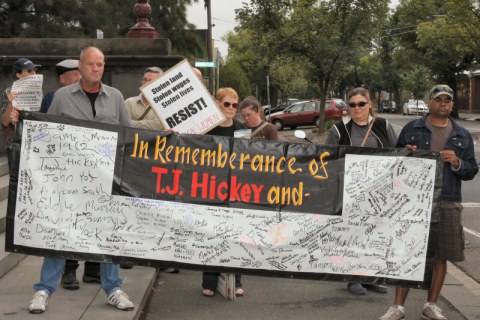