Global weekend of action on climate: Walk Against Warming

December 12 is a global day of action on climate change as negotiators and world leaders meet in Copenhagen to do a global deal on climate change. "While they talk the talk, we're walking the walk all over the world, from New York to Tokyo, Mumbai to Paris and all over Australia. So get your walking shoes on and be part of the most important Walk Against Warming ever." says Walk against Warming. Vigils around the globe are also being organised 11-13 December through the 350.org website

2009 is set to become the Fifth hottest year on Record, with Australia part of a rich cabal trashing climate talks, and recently given the Fossil of the Day Award for Greenwashing carbon capture and storage. Spin by climate deniers about hacked emails between scientists is threatening to drown out the call for a strong climate deal in Copenhagen. Australian Governments continue developing coal while paying lipservice to sustainable alternatives, with insufficient emissions targets and a market based emissions Trading System.

Come along on 12 DECEMBER - Global day of action

More details at Walk against Warming.

Around the world people will gather at iconic and strategic locations in their communities, and will light candles of hope to stand in solemn solidarity with the citizens of the nations whose very survival is threatened by the climate crisis. Anyone can register a vigil in your community through the 350.org website, or search for one to join. 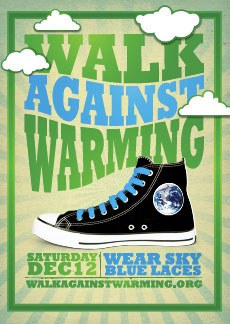 Re: Global weekend of action on climate: Walk Against Warming

There are some photos of the rally and march on the Melbourne Protests blog - http://melbourneprotests.wordpress.com - and a slideshow including these images and more on EngageMedia - http://www.engagemedia.org/Members/pc/videos/waw09-melb.mp4/view
-p