A Marine Climate Change reportcard released by Australian Scientists has warned that: ocean temperatures have warmed; the flow of the East Australian Current has strengthened, and will likely increase a further 20% by 2100; Marine biodiversity is changing in south-east Australia in response; and declines of over 10% in growth rates of massive corals on the Great Barrier Reef are likely due to ocean acidification and thermal stress.

This reportcard is the first-ever Australian benchmark of climate change impacts on marine ecosystems and options for adaptation. The report identifies key adaption measures but emphasises the needd for "immediate and vigorous international diplomacy to reduce greenhouse gas emissions."

"The objective of compiling this information is to consider options available to environmental and resource managers in their response to changes in ecosystem balance," said project leader, CSIRO Climate Adaptation Flagship scientist Dr Elvira Poloczanska.

"On both sides of the continent there is clear evidence of ocean warming and this is already bringing sub-tropical species south into temperate waters, and in the case of the giant kelp forests in Tasmania, appears to be having a severe impact in just a few years."

"This research is relevant for anyone with a recreational interest or financial investment in our coasts and oceans," Dr Poloczanska said at the launch in Brisbane on Friday.

On ocean acidification the report says "The level of atmospheric CO2 is now higher than at any time in at least the past 650,000 years, and probably has not been as high as present levels for 20 million years. The current rate of increase of CO2 in the atmosphere is one hundred times greater than the most rapid increases during major climate changes over the last 650,000 years. Approximately half the fossil-fuel CO2 emitted by man has now dissolved into the ocean."

Dr Will Howard, from the Antarctic Climate & Ecosystems Cooperative Research Centre, Hobart Tasmania and one of the contributors said that "The impact of ocean acidification, a pervasive and persistent effect on the ocean, has only begun to be detected in nature in the last few years, and indeed most of the papers we cite date from the past year. A number of marine ecosystems of national and global importance, including the Great Barrier Reef and the Southern Ocean, are already feeling the effects of acidification. Continued monitoring of emerging climate impacts and evolving science, through processes like the Report Card and its updates, will be vital in the coming years for policymakers, the public, and the scientific community."

Dr Richard Matear, a Senior Research Scientist at CSIRO Marine and Atmospheric Research and a contributor to the Report Card said "Climate change and ocean acidification have the potential to impact many marine organisms and alter the functioning of marine ecosystems.....The report card presents an easy to read and concise summary of the risks and the uncertainties of the impacts of climate change and ocean acidification. It is essential reading to anyone interested in the Australian marine environment."

With Rising Sea Levels and subsidence from reduced rainfall, tidal wetlands and mangroves will need to expand. The reprort recommends removal of artificial barriers such as seawalls, ditches and buildings to allow tidal wetlands to adapt naturally and allow landward migration of these habitats.

Some species of Tropical fish are migrating further south. With the degradation of coral reefs a loss of diversity and widespread changes in the composition of coral reef fish communities is likely. For estuarine species as rainfall declines affecting riverflow, will reduce the abundance of these species. Higher temperatures will affect the breeding of marine reptiles like sea turtles and sea snakes.

Dr Helen McGregor, an AINSE Research Fellow in the School of Earth and Environmental Sciences at University of Wollongong called for immediate action on climate change "It should act as a 'call to arms' for scientists, policy makers and the general public to better understand our unique marine environment, and to do everything possible to reduce greenhouse gas emissions. The report card highlights the fact that human-induced climate change is already upon us."

The reportcard and scientific reports can be read in full at www.oceanclimatechange.org.au/. 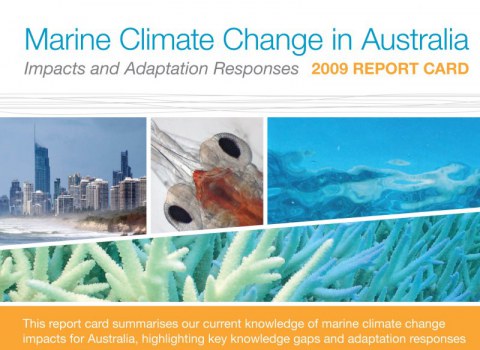