Two hundred people blockaded Parliament House in Canberra today calling on Prime Minister Kevin Rudd to secure a strong, legally binding treaty at the upcoming international climate negotiations in Copenhagen. Police arrested 130 people, although it is believed none were charged.

The participants, from across Australia and from every walk of life staged a sit-in, blocking the doors of Parliament and refusing to move. The protesters were a mix of elderly, teenagers and mums and dads.

They have accused Prime Minister Kevin Rudd of not doing enough to secure a strong climate treaty at Copenhagen.

"There are people here today from every state in Australia, and most of them have never undertaken peaceful civil disobedience before," said Georgina Woods, spokesperson for the demonstration. "We are here today on behalf of every Australian whose children and grandchildren will be affected by the devastation of climate change."

"We're here to issue a moral challenge to Rudd to demonstrate true climate leadership at Copenhagen. While he says a legally binding climate treaty is important, the commitments he has put on the table are drastically weakening the deal."

"The Copenhagen climate talks are the world's best chance to prevent devastating climate change. Prime Minister Rudd has the opportunity to play a role in determining how today's leaders respond to the climate crisis, to leave a courageous legacy for future generations. Rudd needs to go to Copenhagen with an absolute commitment to securing the deal the climate science demands."

The protesters set up at 11am and refused to leave the entrance as an act of civil disobedience. From Midday they were gradually taken away by police. Greens Senators Christine Milne addressed the protesters and was received positively. Liberal Senator Bill Heffernan and Family First Senator Steve Fielding, both known as climate change sceptics, attempted to lecture the crowd, with Steve Fielding being laughed down. The police closed Parliament House to the public while detaining protesters.

The Rudd Government's Carbon Pollution Reduction Schemen (CPRS) is a market based Cap and Trade mechanism for pricing carbon pollution presently being negotiated with the opposition to be debated in the Senate this week. The Government has committed to a cut of 5% on 2000 levels by 2020, or up to 25% on 2000 levels by 2020 if other major industrialised countries take similar action. The International Panel on Climate Change (IPCC) 2007 report recommended that to avoid dangerous climate change cuts of 25 to 40% on 1990 levels would be required by 2020 from industrialised countries.

"Australia has to commit to cutting our greenhouse pollution by 40%, we must make a fair contribution to international climate finance and we must make emission cuts at home, not weasel out of them by buying forest offsets internationally. The world will judge whether Rudd is walking his talk, or if it's just empty rhetoric." said Blockade spokeperson Georgina Woods.

"When the nations of the world meet in Copenhagen in just two weeks time, they will have a choice. They can continue their dangerous delay tactics, or they can put aside petty differences and craft a strong, fair and binding global climate treaty address the devastating threats posed by climate change. We want Rudd to know that the people of Australia are watching." Ms Woods said. 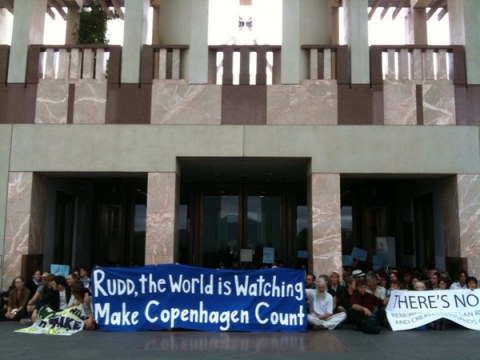 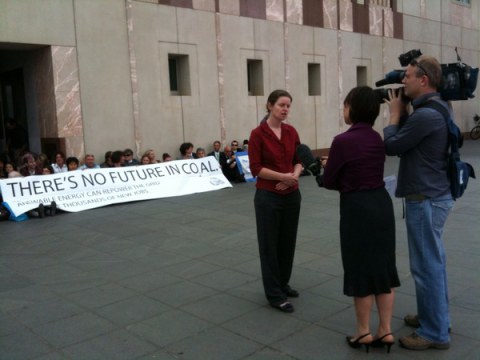 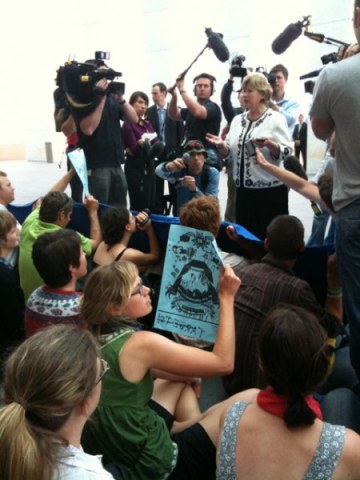 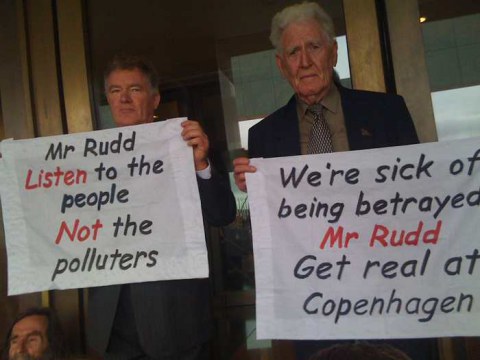 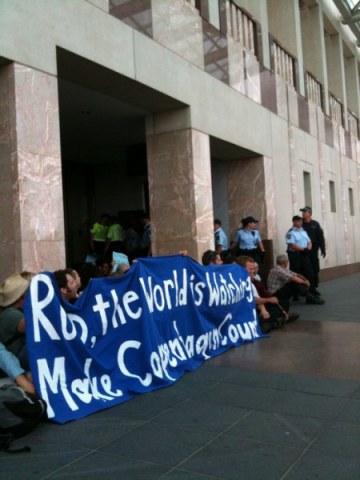 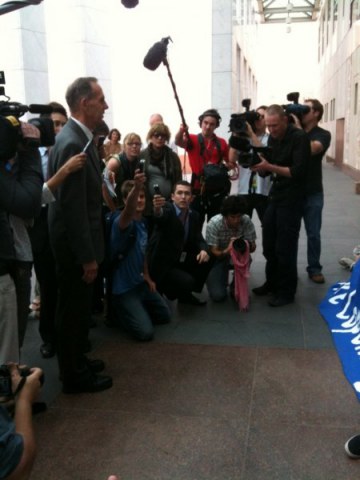