Walkers mark the dangers of rising sea level for Melbourne

Community and environment groups today started a 100km walk from Sorrento to Port Melbourne around Port Phillip Bay, to raise awareness about climate change and rising sea levels in Victoria and around the world. Markers were placed along the way to show where the sea level will rise to by the end of the century if efforts to reduce greenhouse gas pollution do not happen immediately.

Friends of the Earth spokesperson Damien Lawson said "Two government reports released this month have highlighted the devastating impact sea level rise will have on our homes, infrastructure and coastal environment; as many as 250,000 Australian homes are at risk," Mr Lawson said.

"Scientists are predicting seas will rise globally by up to two metres by the end of this century, and possibly much more. Around the world many thousands of communities will be lost and millions of people will be displaced."

"We think this is an extremely important issue for Victorian coastal communities and we encourage them to join us on the walk or attend one of the three public meetings we will be holding in Rosebud, Frankston and St Kilda."

Rising Sea Level will pose a problem around the globe, but developing countries will be particularly hard hit by climate change as they do not have the resources for mitigation and adaption to rising sea levels and other climate impacts. Dhaka, Manila and Jakarta top a list of Asian cities facing brutal climate future, according to a report released by WWF this month.

Mr Lawson said governments around the world were not acting to dramatically cut global warming pollution and were not sufficiently prepared for large scale sea level rise.

"An 18-month investigation by a House of Representatives committee told the government it was time to act to prepare thousands of kilometres of Australian coastline for the threat of sea-level rise and extreme weather," Mr Lawson said.

"The planning guidelines for sea level rise are now out of date and need to be revised upwards. We also need to plan to avoid these disasters through supporting a climate change deal in Copenhagen that gives us the best chance of a safe climate future. The current federal government position would lock in catastrophe." Mr Lawson said.

A new CSIRO report on sea level rise in Victoria, released this week raises further planning issues. The Effects of Climate Change on Extreme Sea Levels in Port Phillip Bay and the Victorian Coast details that at a 1.1 m sea level rise then low lying areas in Victoria that are currently vulnerable to a 1-100 event will be flooded on a daily basis. Victorian Planning Guidelines only take into account a sea level rise of 0.8 metres. "Rising mean sea levels and possible changes in the behaviour of severe weather conditions are likely to increase the frequency and severity of extreme sea level events in the future." says the report.

"Two scenarios used in the CSIRO report are above 1.1 metres and a Commonwealth report released on Saturday uses 1.1 metres as a likely middle range estimate." said Damien Lawson, "We should be making planning decisions on worse case scenarios and that means revising the sea-level rise guidelines for planning in Victoria. It is now clear that basing our planning and adaptation guidelines on a best case scenario is a dangerous thing to do," Mr Lawson said.

The walk started at 8am with drizzly weather, with Local councillor Tim Rodgers in attendance. At three pm the group arrived in Rosebud, where they were met by Rosebud and McCraes Foreshore groups carrying placards. According to the first day's report: "They showed us the high point of April's storm surge (well inland, in a swale between the dunes) and the 1 metre highpoint beyond that - exactly where there are plans to build a major pool development in future."

The walk held a public forum in the memorial hall at Rosebud. The April storm surge high point is just one metre below the top step of the hall, so the hall is under threat from future sea level rise.

The Port Philip Rising walk has been organised by Friends of the Earth Melbourne in partnership with the Victorian Climate Action Centre.

Public meetings being organised include: 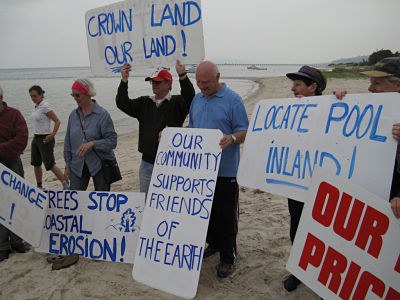 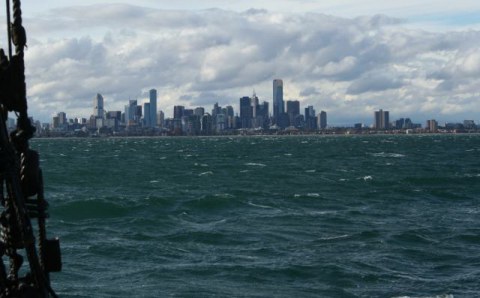 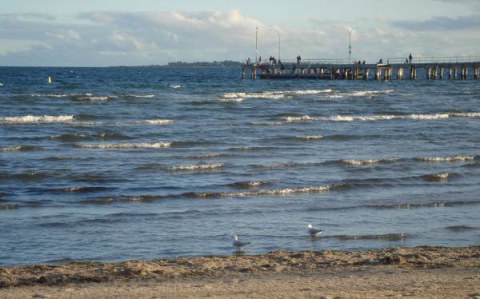 Just finding this now, but honestly still incredibly useful and applicable to what public and private investors should be analyzing and what citizens should be planning for.

Where has the sea level risen?You are a pack of Alarmists and need to be taken to task on your lies.Not one prediction has come true, and you have been making big statements for many years now.