Sydney IMC: Firefighters demanded action on climate change from politicians in Canberra on November 19 while much of south eastern Australia sweltered and suffered with temperatures well above 30 degrees. Many regions were declared severe, extreme or catastrophic fire danger. The Firefighters carried a banner "Firefighters for climate change action now" demanded that the Government's Carbon Pollution Reduction Scheme be passed by the Senate.

Scientists have reported this week that the Climate Treaty is more urgent with Global carbon emissions still increasing. with Australia the worst emitter on a per capita basis. Scientists have also called for Emissions need to be slashed to save Great Barrier Reef. | Read ACTU media release | Climate Institute Media Release

Several Temperature records were set on Thursday 18 November across South Australia, Victoria and New South Wales with the Bureau of Meteorology reporting Excessive Heat across NSW. NSW Rural Fire Service Commissioner Shane Fitzsimmons said, "Given the dry conditions in many parts of the state and erratic fire behaviour we have seen in the last week, I have concerns about fires taking hold quickly and being difficult to control. Residents of NSW need to be prepared for bush fires. Fires in these conditions will move rapidly and may threaten without warning."

Peter Marshall, national secretary of the United Firefighters Union of Australia, said that "We are not scientists but we are the people on the front line," he said. "If there is not action put in place now, Federal Government's research says that places such as Canberra by 2050, the type of fires we've seen here in 2002 will happen on an eight-year basis."

"We are asking you very clearly, stop making this a political football, put in place the action that's required to secure the future because by 2020 we are going to see a frequency like we've not seen before." he was reported by ABC News as saying.

He has called on opposition senators to pass the climate legislation but also asked Prime Minister Kevin Rudd to show leadership on the issue and lift the emissions reduction targets to between 25 and 40 per cent. The Government has set a reduction target of between 5 and 25 per cent reduction from 2000 emissions by 2020.

"Pass legislation that's required and we say pass it with the maximum standard not the minimum standard," he said.

Paul Marshall published an Open letter from the Firefighters Union in February, shortly after the Black Saturday fires in Victoria that killed 173 people. In that statement he said "Firefighters know that it is better to prevent an emergency than to have to rescue people from it, and we urge state and federal governments to follow scientific advice and keep firefighters and the community safe by halving the country's greenhouse gas emissions by 2020."

“In 2007 our research showed fire danger increasing as emission levels rise and that a new ‘catastrophic’ category would be needed. Tragically, since then Australia has seen devastating uncontrollable ‘fires of climate change’ in Victoria,” said The Climate Institute CEO John Connor.

John Connor continued "Unless we address the root cause of the problem – rising global emissions - our firefighters and communities will increasingly be faced with these devastating fires of climate change - which require an entirely new level of preparedness, resourcing and research.With just days before Copenhagen, which needs to deliver the foundations of a ratifiable treaty later in 2010, the Parliament needs to strengthen, not weaken, the CPRS next week.”

In 2007, in research for The Climate Institute, the Bushfire CRC, the Bureau of Meteorology and CSIRO Marine & Atmospheric Research produced Bushfire Weather in Southeast Australia: Recent Trends and Projected Climate Change Impacts.

Also occuring in Canberra this week is a Climate Justice Fast outside Parliament House. Beyond Zero Emissions visited their camp and said "These three people on hunger strike outside Parliament House are one component of the Climate Justice Fast - an international hunger strike for climate justice and for urgent and science-based actions to prevent catastrophic global warming. There are around 100 people around the world taking part in fasts of varying length as part of this action, with numbers growing day by day. Eight of these people, including Paul and Michael here in Canberra are doing the "full" fast, which is indefinite and will probably go until after the Copenhagen negotiations finish - a total of six weeks without food!"

At the start of the week GetUp volunteers took on Parliament House and Kevin Rudd - with a full-page newspaper ad in the Australian Newspaper and a Kevin Rudd impersonator who said ""If I am honest with myself, we must acknowledge that the Emissions Trading Scheme, as it stands, is a dud. We argue around the margins of a 5% target. My friends, that is not nearly good enough. That is why I will ask for a minimum 40% cut in Australia's emissions by 2020." 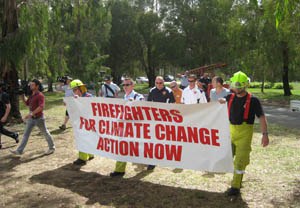