Scientists call for emissions slashed to save Great Barrier Reef

Marine and climate scientists have called for at least a 25% cut in carbon emissions from developed countries like Australia to save the Great Barrier Reef. A 25% cut in emissions would amount to peaking at less than 450ppm atmospheric CO2 and a 50/50 chance of staying below 2 degrees Centigrade. And by 2050, emissions would have to decline by up to 90 percent below 2000 levels. Even with this scenario tropical reefs may be substantially degraded.

Above 2 degrees of warming coral reefs are likely to die resulting in a loss of species diversity and destruction of the reef ecosystem.

“Coral reefs are in the frontline of the effects of climate change. The ‘outstanding
universal values’ of the Great Barrier Reef have already been altered by rapid climate change.”
Professor Ken Baldwin said on the occasion of the release of a statement by 13 prominent Australian Marine and Climate scientists by the Federation of Australian Scientific and Technological Societies (FASTS) on emission reduction targets and the Great Barrier Reef. The statement was launched at Parliament House, Canberra.

Coral Reefs have already been affected by climate change due to their sensitivity to both relatively small temperature rises and to acidification of the oceans due to increased levels of dissolved CO2. In 1998 and again in 2002 when summer maximum temperatures rose 1 to 2 degrees, unprecedented coral bleaching occurred and extensive mortality due to thermal stress affected over 50 per cent of the reef.

The Great Barrier Reef contributes $5.4 billion annually to the Australian economy including $5.1 billion from the tourism industry alone.

The statement notes that Ocean acidification is accelerating and "will impact all marine calcifying organisms, potentially disrupting the entire ecology of the world’s oceans, resulting in severe socio-economic impacts on fisheries and other marine industries."

Some local actions can be taken to increase reef resilience to climate change including reducing polluted runoff from land, protecting stocks of herbivorous fishes, both of which act to prevent the replacement of corals by algae.

According to the Great Barrier Reef Outlook Report 2009 at CO2 equivalent concentrations above 450 parts per million, most of the Reef’s ecosystem components will be severely threatened. And so the scienists call for "an emissions reduction target of at least 25 per cent by 2020 in order to stablise atmospheric CO2 levels below 450 parts per million, and thereby allow the prospect that the Great Barrier Reef can be inherited by future generations of Australians. Local leadership and concerted global action are both critical to achieving this target."

The scientists who signed the statement: 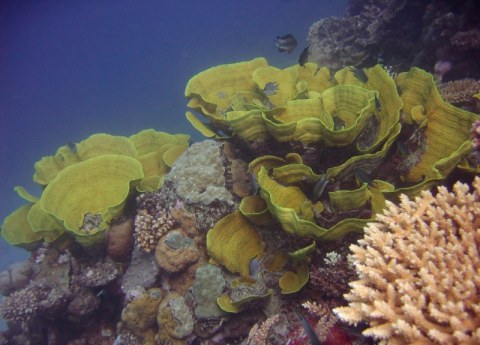 Yes CO2 emission should be reduced as soon as possible otherwise dangerous ecological imbalance as well as serious environmental problem will come shortly.Here is the case of great barrier reef.

I'm all for saving the Great Barrier Reef, don't think I'm not but shouldn't scientists be calling for emissions to be slashed to save the human race?!