Greece: Teo Eliopulos still not in a real hospital!

Greece: Teo Eliopulos still not in a real hospital!

Teo Eliopulos is an anarchist and the last prisoner from the December Revolt still in pre-trial detention and is denied bail for his beliefs.

Teo Eliopulos has been in prison since December (more than six months) and as of yesterday is the only prisoner of the revolt to be denied bail - still. On July 9 the Court of Appeals made it explicit, in rejecting Eliopulos’ application, that it did so on the grounds that Eliopulos is an anarchist and therefore a “danger for democracy”.

Teo Eliopulos (also Thodoris Iliopoulos or Hliopoulos, in Greek: Θοδωρής Ηλιόπουλος, that's a male name) is the last prisoner charged with fake charges related to the December 2008 Revolt. He rejects all charges against him, because they are fabricated by a system that seeks to prosecute freedom-loving people. Already 34 days in hunger strike, his life is at great and immediate risk, as a group of lawyers in solidarity agree.

The prison admin refused to transfer Teo Eliopulos into a real hospital for more than a month, at great danger for his life, and instead put him into the prison's hospital on Wednesday 12 August 2009. According to medical opinion, this is inappriapriate. The real battle begins now!

See what one of Teo's friends has to say (translation from Greek posting on Athens Indymedia):

Notwithstanding Teo's transferral to the prisoners' hospital today, their objective remains the same: to make him stop his hunger strike, began 34 days ago. Now that he is exhausted, they will project all their obnoxious power onto him, with their typical bullyness. Now they will throw onto him all their revengefull mania. The real battle for his support and freedom begins now. Our solidarity is Teo's breath.

Today, 12 August 2009, Teo Eliopulos, inmate in Koridalos Prisons and hunger striker since 10 July, was hospitalized in the Prison's Hospital.

Teo Eliopulos is in his 34th day of hunger strike and his health is seriously affected which means his life is at risk, as the medical opinion made available on 10 August says: "Teo Eliopulos has lost 18 percent of his weight which results in side effects (επιπλοκές) in many of his body systems (cardio-vessel, muscle, central neuronic, electrolytic disturbances) that put his life in immediate risk!"

As his doctors have said many times, Teo Eliopulos should have been in a place of increased medical surveillance lots of time now. His last-minute hospitalization in the prison's hospital today, after 34 days in hunger strike (!), does not show the right medical taking-care of a patient whose health is seriously affected and day after day is getting worse, with his life being at danger.

Observing the health of Teo Eliopulos requires hospitalization in a real hospital that has the technical means and an experienced medical team, things that the a prison's hospital like the one in Koridalos Prisons doesn't have.

Teo is fighting for his life.

In the battle for his support and his freedom, our solidarity is Teo's breath.

Here is a free translation (not without errors or inaccuracies, beware, any help to fix is welcome) of the medical note regarding Teo Eliopulos, made available on 10 August:

Request to all the doctors that observe him:

Teo Eliopulos is in his 32nd day of hunger strike and only drinks water, his health situation is very bad in the last days as he has lost 18 percent of his body weight. His weight int he beginning was already low (60 kgs), a fact that makes his particularly vulnerable in health side effects (επιπλοκές) in less time period due to very low fat deposits and therefore more muscle loss. The medical examination showed great weakness (with difficulty in standing upright), απίσχνανση, orthostatic low-current (ορθοστατική υπόταση), frequent sub-sugar crises (συχνές υπογλυκαιμικές κρίσεις), sleepiness (υπνηλία), great muscle pain (μυϊκά άλγη) and cramps (κράμπες) as well as cardiac arrythmias (καρδιακές αρρυθμίες). All the above show the side effects (or disturbances? επιπλοκές) in multiple systems (cardiac-vessel καρδιαγγειακό, muscle, central neuronic κεντρικό νευρικό, electrolytic disturbances ηλεκτρολυτικές διαταραχές) that put his health and his life at immediate danger. The situation is more problematic as well from the fact that he is in prison without the capability of continuing clinical-laboratory observation and support by an experienced medical team with the capability to immediately take care of any dangerous side effects or disturbances (επιπλοκών) for his health and his life. We believe that the decision to remain in prison while he continues his hunger strike is medically irresponsible and criminally dangerous, under these conditions. We ask for his immediate transfer to a hospital that has the necessary technical equipment for medical support, which is necessary due to the critical situation that his health enters in right now, based on the last data.

Letter by Teo Eliopulos on 5 August 2009 translated in English:

On the day I learnt that they’d extend my ‘temporary’ imprisonment by six months I took the decision to begin my hunger strike; to fight by the only means I still have, my own body.

After twenty-seven days my body, now ten kilogrammes lighter, is on its way to freedom or the final death, depending on what the scandalous people of the State decide, the ones who cover the SIEMENS and church property scandals (Vatopedi), those who free Pandeleimonas who stole a treasure, and accepts no responsibility for the attacks against migrants or the murders of workers. The same State that whoever expresses to it their opinion and demand from it equality, justice, and a better future—the future of our children—is being labelled an ‘enemy of democracy’ and has their human rights violated.

I’m one of those tens of thousands of people with an active consciousness, and not a passive citizen. And I don’t cover my face.

From the system's Augustine sloth

----
(same URL as above)
From: Teo Eliopulos
To: Prison headquarters

I inform you that from now I’ll not accept any new medical examinations by the prison’s doctor, since my daily visits to the doctor’s office are mainly a nuisance and cannot predict anything about my health.

I request to be moved into a hospital.

On the 8th of July, after six-and-a-half months in prison, where I ended up following the incidents of December accused for things I never did, the Court of Misdemeanours ordered the extension of my pre-trial detention.

It is the only court decision ordering the extension of a detention for the events of December, at atime when every single other person in pre-trial detention for December’s revolt (with the same or other charges) has already been released.

The decision reveals personal prejudice and hatred against me; feelings that cannot be justified or explained and is a decision that is biased, unfair and illegal by default, same as any detention.

I am going on hunger strike. It is the only means I have left as a prisoner to shout out the truth and denounce the injustice and prejudice of the mechanisms of “justice”. To denounce the arbitrariness and the violence of a blind “justice” and its even blinder servants.

From Friday, July 10th, I will stop receiving any food and I will submit a hunger strike notification to the prison’s administration.

I thank them in advance.

I denounce the directly involved persons who watch me in the prison's medical office and are related with science, who as they themselves say, they accept no responsibility for my health since I chose to become a hunger striker. The behaviour of some persons makes it evident that there is a psychological war. I wonder, would they do the same with Skopelis (Σκορπέλης), Georgiou (Γεωργίου) and Mavridis (Μαυρίδη)?

The struggle against the hated regime continues. The passion for freedom is stronger than all the prison’s cells.

Today 5 August 2009 a group of 7 lawyers visited the Ministry of Justice together with Teo's legal defence team, in order to demand his transfer into the prison's hospital.
The Ministry's General Secretary, responsible according to law, refused to listen to them by claiming that he was very busy, and said that he would meet them on Friday 7 August at the latest. On Friday Teo Eliopulos will be on his 29th day of hunger strike.
In any case the need to tranfer hunger striker Teo Eliopulos at the hospital is immediate and necessary regardless of General Secretary's "workload".
----

Many streets in most Greek cities have some graffiti demanding the release of Teo Eliopulos, while there are lots of banners and microphonic (μικροφωνική) interventions as well in city squares, etc!

Where you can learn more:

previous letters by Teo translated in other languages:

Hope my translations and the other comrades translations above helped you to get the feeling. Sorry for any strange words in the translation but I tried my best and if you can improve anything please do it, or translate into more languages, and spread the news!

INTERNATIONAL SOLIDARITY IS OUR WEAPON!

1. Anarchist graffiti in Keratsini demanding the release of Teo Eliopulos, from: http://athens.indymedia.org/front.php3?lang=en&article_id=1064382

2. Banner demanding the release of Teo in Karditsa, from: http://athens.indymedia.org/front.php3?lang=en&article_id=1066173 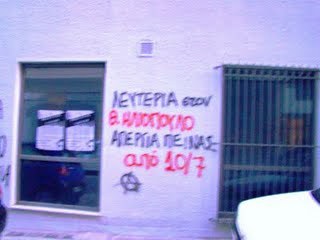 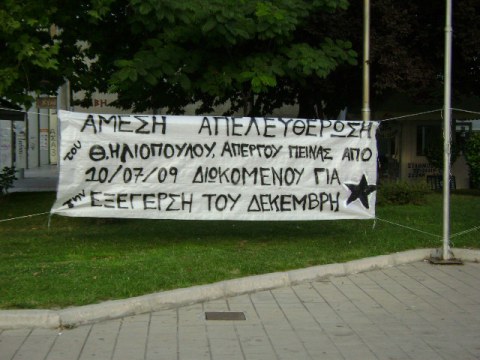 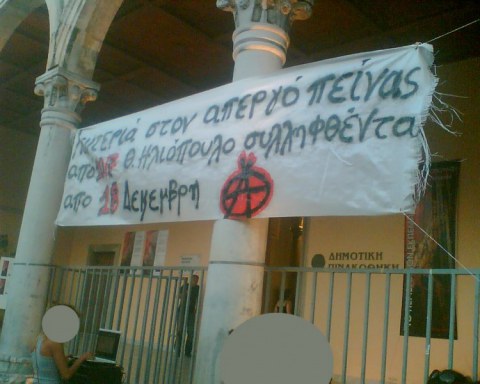