Australian Catholic Workers, Jim Dowling and Ciaron O'Reilly were arrested this morning while blocking a major military access road to the Talisman Sabre 09 exercises being held at Shoalwater, central Queensland, Australia. Along with seven other anti war activists, the pair blockaded the road for over and hour and a half, and prevented more than a dozen US Army Jeep Troop carriers from entering the area.

The activists raised a signpost to mark the road "Talsiman Sabre 09 - The Road to Perdition". They then knelt in the middle of the road holding signs stating "War is Terror is War" and "Resist the War on Afghanistan" while others present read the names of civilians and troops who have been killed in Afghanistan.
To minimise disruption to local citizens, private vehicles have been allowed access. And for safety, the highway is not blocked.

The pair appeared in court late this morning and are refusing to co-operate with bail conditions while the military exercise continues and will likely be held in custody for the length of the exercise.

O'Reilly stated, "Talisman Sabre is a $250 million exercise in futility. Talisman Sabre is not a game or an exercise, it is a fantasy - a war theatre with no civilians! Most of those being killed by American, Australian and Pakistan militaries are innocent civilians, most fatalities have been women and children. The Af/Pak war is presently escalating and expanding. These Talisman Sabre exercises are significant preparations for more killing.

The Australian involvement in the war on Afghanistan is now eight years old. Ten Australian troops, hundreds of British and U.S. soldiers and thousands of Afghani civilians have been killed, millions of Afghanis and Pakistanis have been made homeless or forced to flee into exile.

-Jim Dowling presently works and lives outside of Brisbane on the Peter Maurin Catholic Worker farm with his wife Anne and their seven children. He was one of the Christian Against All Terrorism group that broke into the secretive U.S. N.S.A. Pine Gap base near Alice Springs http://www.pinegap6.org to carry out a citizen's inspection during the recent war on Iraq.
-wikipedia
http://en.wikipedia.org/wiki/Jim_Dowling

-Ciaron O'Reilly spent a year in U.S. prisons as one of the ANZUS Ploughshares convicted of damaging a B52 Bomber in New York on the eve of George Bush Sr.'s war in 1991. O'Reilly was also part of the Pitstop Ploughshares arrested in Ireland in 2003 and charged with $2 1/2 million damage to another U.S. war plane en route to George Bush Jr.'s invasion of Iraq. The group was acquitted of all charges unanimously by an Irish jury in 2006.

*Solidarity letters and postcards can be sent to Jim Dowling or Ciaron O'Reilly c/- 69 Kurumba St. Kippa-Ring, Q.4021 Australia (mail will be redirected to the jail or watchhouse where they are detained for the length of Talisman Sabre 09)

- If you would like to make a financial donation to this act of nonviolent resistance (we have failed to set up a seperate account), you could send a cheque to "Ciaron O'Reilly" P.O. Box 6376 Fairfield Gardens, Brisbane, Q.4103 AUSTRALIA. This will help us with transport, outreach etc.

"Because we want peace with half a heart, half a life and will, the
war making continues. Because the making of war is total - but the making of peace by our cowardice is partial."
Fr. Daniel Berrigan SJ

We come to Talisman Sabre to lock the gates, block the access road to the Shoalwater exercise area and read out loud the names of the dead of the war on Afghanistan - ten Australian, hundreds of U.K./U.S. troops, and thousands of Afghani civilians. We come to nonviolently resist this exercise and the expanding, escalating "Af/Pak War" on the Pushtun, Afghani and Pakistani peoples.

We have come to the Talisman Sabre exercise in Queenland, Australia, during a time when the now Obama led war on the Pushtun people of northern Pakistan and southern Afghanistan is wreaking death and destruction. No target is off limits; weddings, funerals, villages, sites of worship, homes and the innocent labelled "collateral damage" have been bombed in this 8 year war. As usual. in modern warfare, the victims are mostly women and children. They die in a flash of an air strike or slowly of untreated wounds. Some will die in years to come from cluster bombs and other unexploded ordianance fired today.

It is a war that has no popular support, yet little visible popular oppostion, in the countries waging it. A war with general disengagement within the countries of the imperial centre from where it is prosecuted and bloody death and destruction on the fringe of empire - this time in the lands of the Pushtun people of northern Pakistan and southern Afghanistan.

It remains self evident "That truth is the first casualty of war!" H.W. Johnson
British and U.S. governments now acknowledge that they sold the 2003 invasion of Iraq on a bunch of lies that have since been clearly exposed (Saddam had no WMD!).

We have been sold the invasion and occupation of Afghanistan on another bunch of lies. Australian involvement in this war is now 8 years old - from 600 troops on the ground to providing targetting information from the U.S. NSA Pine Gap base (near Alice Springs) for U.S. bombing raids. One such raid by a B1 Bomber killed over 100 Afghani civilians last month.

The war is now refered to as "Af/Pak" by the Obama administration and Pentagon warlords. It continues to be marketed as a Bush's neverending "War on Terror" This month we witness an American surge in southern Afghanistan and the Pakistani's military offensive in its northern provinces that is creating millions of refugees.

As Peter Ustinov reflected "War is the terrorism of the rich. Terrorism is the war of the poor!" The present policies and actions of Obama and Rudd will create more orphans, more vengeance and more terrorism. There is no military solution in central Asia. To seriously address the issues of terror one would have to address the 30 year role of the Saudi royal family funding, Pakistani military training and U.S. empire building in promoting the wholesale terror of government forces and the retail terror of paramilitary groups employed in the "great game" of empire building in central Asia. Instead of addressing the role of these rich, corrupt and powerful governments and militaries we are asked to keep on killing the poor. In Australia the churches, the academy and the media maintain a house broken silence in the face of this 30 year slaughter and destruction of Afghanistan.

All the powers require from us is our silence and sedation in the face of these great crimes that are being visited on the peoples of Pakistan and Afghanistan today. We know that war is terror is war. We refuse to be sedated from the cries of the poor, suffering at the hands of the governnments prosecuting this war. In resisting Talisman Saber and the Af/Pak War, we will break our silence and join in a shared context of jeopardy - with the peoples persecuted under the Af/Pak war, the soldiers trained and deployed to prosecute this war. We will enter this jeopardy in a spirit of nonviolent resistance to Talisman Sabre and the Af/Pak War

We know as Australians, our government generates the lie that our security is only to be found in service to empire. This has been our historic role from the 1800's to the present day - dispatching Australian troops to Aotearoa, Sudan, South Africa, Gallipoli, Malaysia, Vietnam, Iraq and now Afghanistan to service American and British empires. As Christians, we know that our security lies in following the disarmed Christ in practising the acts of mercy, nonviolence and the realisation of peace and justice.
Jim Dowling
Ciaron O'Reilly
July 9th. 2009 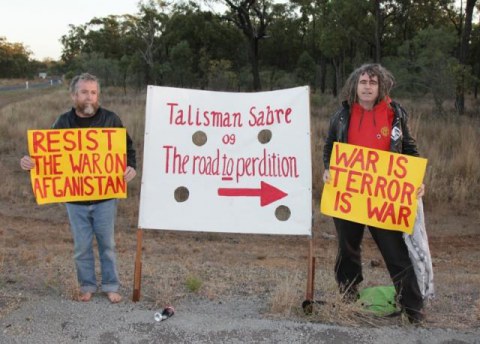 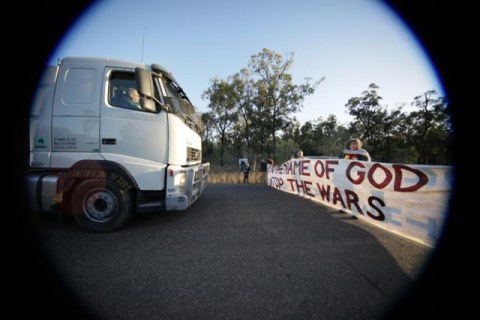 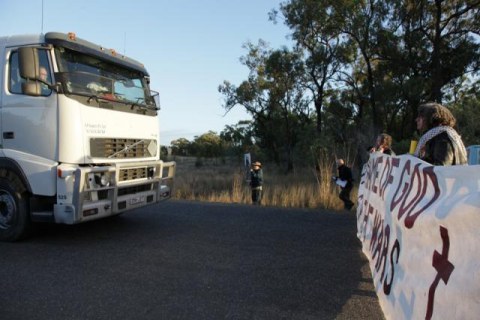 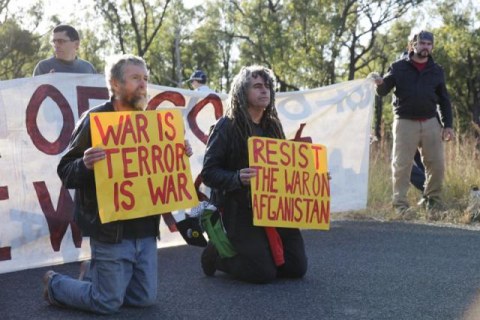 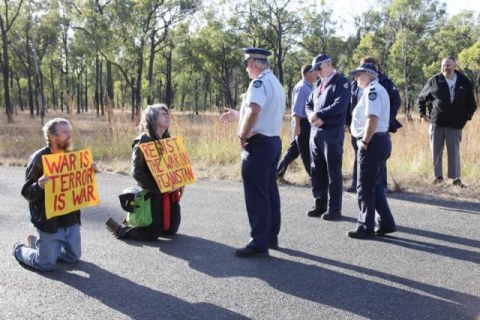 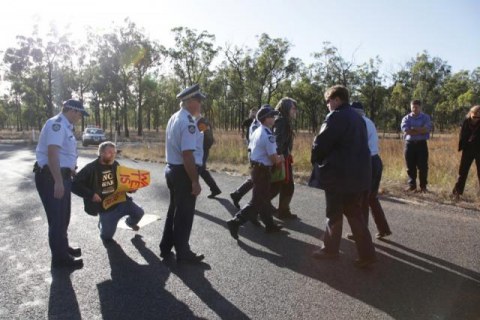 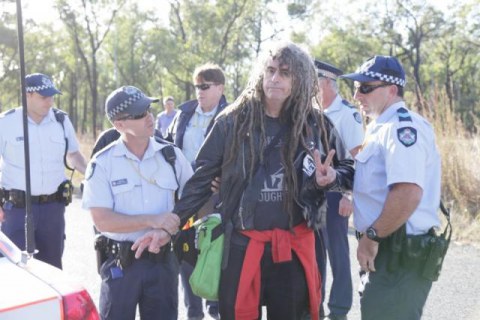 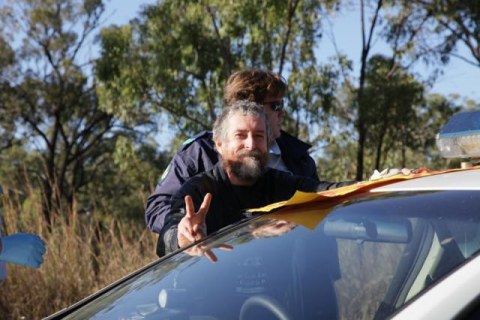