In Sydney more than 2000 people gathered to hear speakers then marched to Kevin Rudd's city office for a symbolic sitdown protest. NSW greens MP Lee Rhiannon told the protest "The Australian Greens will oppose the CPRS legislation because the target is not ambitious enough. The world is on red alert, urgent action is needed to rein in runaway climate change now. The prime minister needs to recognise that baby steps is not what is needed, we need the giant leap to a zero emissions future. We know that achieving that is not going to come with the carbon pollution reduction scheme - that's a scam." according to a report in the Age.

In Hobart, 1200 people gathered in the rain and heard Greens Senator Christine Milne say that the Rudd Government's carbon emission scheme needs to cut emissions by 40 percent by 2020 or the Greens would vote against the scheme in he Senate.

Several hundred people attended a rally in Perth (Photos 1, 2, 3). About two hundred people protested in Brisbane where the rally heard from members of the Pine Rivers Climate Action Network, the Greens, the St Johns Wood Sustainability Group and the Queensland secretary of the Electrical Trade Union, Peter Simpson.

On a cold and bleak Melbourne winter day about 4,000 people gathered at the State Library where they heard from Greens Senator Bob Brown and 'Climate Code Red' author and climate activist David Spratt, and other speakers.

Leaving the State Library, people marched down Swanston Street to the front of the Melbourne Town Hall where the crowd was asked to do a sitdown protest, reminiscent of the Vietnam Moratorium protests of the 1970s. Inside the Town Hall the Victorian State Conference of the Australian Labor Party was meeting. The Victorian tate Government under Premier John Brumby is committing the state to building a new coal fired power station and an energy intensive Desalination Plant to be run by a private corporation which will double water bills.

A woman from Tuvalu, Emeretta Cross, spoke on the rising seas threat to her country and other low lying nations and spoke of the need of acting for the children and their future. Damien Lawson, National Climate Justice Co-ordinator for Friends of the Earth, spoke on the need for a campaign of popular civil disobedience if politicians continue taking no action or ineffectual action to rapidly decrease carbon emissions.

After the sitdown in front of the Town Hall the march proceeded up Bourke Street to Parliament House then continued to Treasury Gardens where the crowd listened to Teagan Edwards from Yarra Climate Action Now espouse the need for joining or starting local climate action groups to take action on climate change. Jessica from the campaign against the Desalination Plant at Wonthaggi spoke briefly about the reacton from ALP State conference officials when she entered the foyer of the Town Hall to protest the building of the Desalination Plant and the impact it will have on climate change and the coastal environment. The rally concluded with some music. 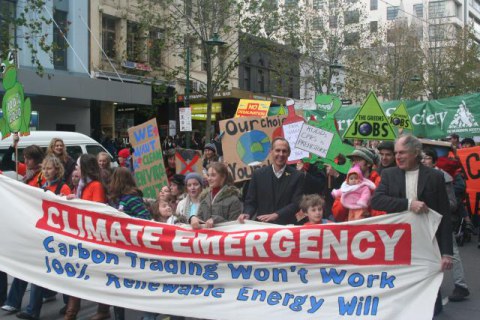 Coverage by other media

hi we are a couple from venezuela, we have here a collective working in counterculture in city of maracaibo agains coal. we are gonna move to melbourne, wanna know people from indymedia and activists to make friendship there, we want to maybe create a music band, d beat or crust punk to make countercultures gigs.
jp and g.

Re: Climate emergency: Thousands march for action across ...

Christine Milne say that the Rudd Government's carbon emission scheme needs to cut emissions by 40 percent by 2020. The Australian Greens will oppose the CPRS legislation because the target is not ambitious enough.