- Repeal 'Stronger/Stolen Futures' Legislation!
- Stop Income Management - not in the NT, not in Bankstown, not anywhere!
- Reinvest in community-controlled services and jobs!

Government statistics show that since 2007 in the NT incarceration has increased 80%, reported rates of attempted suicide and self harm are up almost 600%, child removal rates increased 80% and there is more alcohol related domestic violence (sources below). Almost $1 billion has been wasted on bureaucrats and punishment.

In 2012, the Labor government passed the Stronger Futures legislation that extends the main measures of the NT Intervention for another 10 years. Aboriginal people will continue to be treated as second class citizens: police can enter their homes without a warrant, courts are unable to consider cultural circumstances when sentencing, alcohol and R18+ material are restricted regardless of community wishes and more than 10,000 Aboriginal people are held on income management against their will.

Stronger Futures legislation also extended income management and the BasicsCard to new "trial sites" around Australia, including Bankstown in Sydney. But a strong campaign uniting Aboriginal people, community organisations, migrants and trade unions has helped hold this back.

The Public Service Association (PSA), who represent Child Protection workers in Bankstown, have voted to ban income management and have made no referrals. They are refusing to be part of the expansion of the racist NT Intervention. Bankstown has the lowest number of people on income management out of all the "trial sites".

Income management has been a disaster - but the government wants the system to cover even more people. New rules mean that from July 2013, compulsory income management will apply automatically to anyone in the NT and in Bankstown who is under 25 and exiting prison, along with young people who have an 'unable to live at home' status with Centrelink or who are on a 'special benefit' due to homelessness or other circumstances.

Statistics on changes in NT from 2007 - 2012 available from: Closing the Gap in the NT Monitoring Report


The Age: "Nation risks a new stolen generation, leaders warn"
Read more: http://www.theage.com.au/national/nation-risks-a-new-stolen-generation-leaders-warn-20130614-2o9ua.html#ixzz2WS1yfVnw
The Guardian: "We have to stop the creation of another Stolen Generation"
http://www.guardian.co.uk/commentisfree/2013/jun/12/stolen-generation-aboriginal-children
Last month, friends from a remote community in the Northern Territory (NT) called me in shock. Police had turned up unannounced with child protection workers to take a young child from a local family. The child was driven many hundreds of kilometres away and placed in a non-Indigenous foster home. The grounds for removal were a “mandatory report” from the local clinic that the child was losing weight. Clinic staff said no support had been offered to the family before removal.

National Reconciliation Week, which started with Sorry Day on May 26, has recently ended. Sorry Day marks the tabling of the Bringing Them Home Report in 1997, a comprehensive inquiry into the racist history of forced removal of Aboriginal children. Sorry Day was initially called to push for implementation of the recommendations of Bringing Them Home.

One important recommendation was for a national apology to the Stolen Generations, finally granted by Kevin Rudd in 2008. But Bringing Them Home was not just about the sins of Australia's past. The report’s concluding chapters raised dire warning that the operations of contemporary child protection agencies were replicating many of the destructive dynamics of the Stolen Generations era. 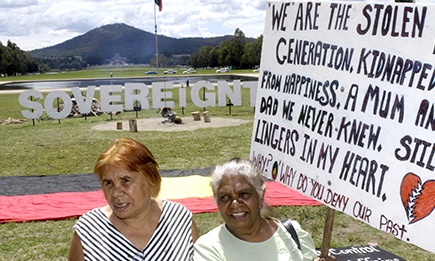 At the time of the report, 20% of children in out of home care were Indigenous, despite being only 2.7% of the population. Bringing Them Home said that the conditions of poverty and oppression experienced by many Aboriginal families were creating serious risks for the safety and development of children. But child protection agencies were discriminatory and ineffective:

“Not a single submission from any Aboriginal organisation saw intervention from welfare departments as an effective way of dealing with Indigenous child protection needs ... The primary reason for welfare intervention in Indigenous communities is neglect. Social inequality is the most direct cause of neglect… problems which result in removals need to be addressed in terms of community development”.

These recommendations were ignored. The Howard government instead fought to deny the Stolen Generations and entrench a politics that blamed Aboriginal culture and the failings of Aboriginal people themselves for the shocking conditions they found themselves in. Aboriginal family support services and women’s centres across Australia were defunded through heavy cuts and the eventual dismantling of the Aboriginal and Torres Strait Islander Commission.

There has been a corresponding explosion in the numbers of Aboriginal children being removed by child protection agencies across Australia. The number of children now being removed is higher than at any time during last century.

Reports from the Productivity Commission show that on 30 June 1997 there were 2,785 Aboriginal children in out of home care. By June 30 2012 there were 13,299 - almost a five-fold increase. More than half of these children have not been placed with kin or relatives.

The 2007 NT Intervention was the culmination of the Howard government’s push to establish punishment and assimilation as the framework for “dealing with the Aboriginal problem”. It was initiated with the support of Labor, who legislated in 2012 to continue most Intervention measures for a further ten years under a policy called Stronger Futures.

Hundreds of millions of dollars have gone into bureaucracies to control Aboriginal life – including a three fold expansion of the NT Child Protection Agency. More than twice as many Aboriginal children in the NT are being removed now than before the Intervention, overwhelmingly for neglect. 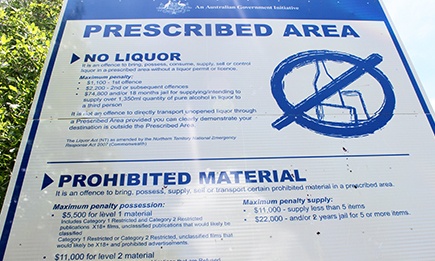 A prescribed area sign detailing a ban on alcohol in Darwin, as part of the Intervention. Photograph: /AAP/Xavier La Canna

This has not made Aboriginal children any safer. Jenni Collard, the acting CEO of the NT Department of Children and Families recently told the Australian newspaper, “if we are taking kids into care, we are not necessarily providing care that's any better”. A major inquiry (pdf) into the NT Child Protection system in 2010 echoed Bringing Them Home:

“The high rates of neglect and exposure to physical violence in the NT are, to a large extent, by-products of poverty and extreme disadvantage”.

The Intervention has compounded this disadvantage. There has been an acute withdrawal of resources for community development. Most communities have been branded “economically unviable”. More than 3,500 jobs have been lost as Community Development Employment Projects (CDEP) close down. A number of these jobs were in family support services. A COAG reform council report this week found the NT has the worst Indigenous unemployment rate in Australia and figures have deteriorated sharply over the period of the Intervention.

NT Children’s Commissioner Howard Bath says, “on the whole, the child wellbeing indicators in remote communities are getting worse”.

Since being elected in August 2012, the new Country Liberal government in the NT has further cut funding to services for Aboriginal youth and families. Now NT Chief Minister Adam Giles is promoting adoption as an option for neglected Aboriginal children.

In response to this, Dr Djiniyini Gondarra, an elder from Galiwin'ku leading resistance to the NT Intervention, wrote a letter to Giles announcing the launch of an initiative called “Keeping them Home”:

“The majority of our people live in Third World conditions, with poverty, unemployment and disadvantage a part of everyday life. The struggle of families to raise their children properly comes from this lack of stability, not from a lack of responsibility”.

“A Yolŋu child has a spirituality, his own ‘skin’, his culture, language, and place in his community. He belongs to that country and its people. You are committing a deep wrong by taking that away from him. This is why so many of the Stolen Generation have suffered so much… What you now propose to do is to tear open the bandages and cut us again.”

“We need more family support programmes in every community run by Aboriginal people. When there are problems, we need ways to bring together those in the community who can offer support through family group conferencing. Together we can find better ways to keep our children safe.”

In all jurisdictions, Aboriginal people and their supporters are gearing up to push similar demands. More than 1,000 delegates packed into the Convention Centre in Cairns this week for the conference of the Secretariat of National Aboriginal and Islander Child Care (SNAICC), voting to initiate a national campaign. A major forum will be held in Melbourne on Friday June 14 titled Stop the Creation of Another Stolen Generation.

This campaign requires urgent support. Large-scale forced removal cannot – once again – be allowed to stand as a “solution” to the oppression and grinding poverty Australia continues to force on Aboriginal people.