MEDIA RELEASE: PM should show some guts and fly the 260 Sri Lankans to Australia

Thursday October 15, 2009 - "Prime Minister Kevin Rudd should open his brave heart - a heart until now only activated in a bout of "prime ministerial swearing" targeting the "scourge of people smugglers" and in a silly turn of resorting to derogatory language, labelling of asylum seekers as "illegal immigrants"," WA Human Rights group Project SafeCom said this morning...

"Instead if wasting media time with this kind of tripe, he should show some real guts and arrange a rescue flight to Indonesia to pick up the 260 Sri Lankans whose story, as related to reporters on Australian radio and television, clearly sounds worthy of a full hearing and assessment under the UN Refugee Convention."

"If it is Labor policy that boats should be stopped, that voyages from Indonesia should be disrupted, because it's such a "treacherous journey" or such a "dangerous voyage" as so often has been expressed by Labor to justify its condemnation of border-breaching boat voyages by asylum seekers, then Kevin Rudd has to start offering some alternatives in bringing asylum seekers from Indonesia to Australia - otherwise it's just another nasty John-Howard-type strategy, that sacrifices the world's most vulnerable population group on the altar of electoral advantage."

"The Prime Minister, in resorting to his nasty and ridiculous turn of phrase in the recent bout of Prime Ministerial swearing, is doing nothing more than the swearing and cursing we see and hear when an ordinary Aussie bloke hits himself on the thumb with the biggest hammer he has laying around in his backyard workshop," Mr Smit said.

"In just four days, it will be eight years ago that the boat known as "SIEV X" sank in the waters of Sunda Strait, and the boats will not stop, as we have seen since that time. But, disgustingly, the government of John Howard, nor Kevin Rudd's administration, have not come up with anything that even comes close to resolving the issue of bringing asylum seekers from Indonesia to Australia. Barking with spin and going about trying to stop boats is one thing, but coming up with a credible alternative seems just too hard for any Australian politician."

"The desperation and "urgent group claims" as expressed to reporters on TV and Radio by a spokesman for the 260 Sri Lankans was palpable, real, and immediate and visible to all Australians."

Kevin Rudd personally stopped the Sri Lankans from sailing to Australia, and he should declare immediately what the alternatives are he has in mind for these asylum seekers, who on the face of it, clearly ran away from persecution."

DECLARATION OF INTEREST: Mr Smit is undertaking post-graduate studies at Edith Cowan University into the nature of the "people smuggling industry" and into the legislation that "criminalises the facilitated entry of unannounced maritime arrivals". 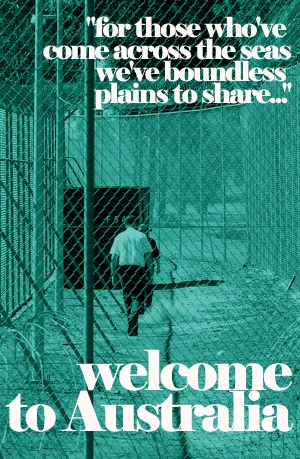 Article below outlines a strong stance by the head of the AWU on asylum seekers. Lets hope that others in the workers movement follow his stance.

By Alexandra Kirk in Canberra for PM

The head of the Australian Workers Union (AWU) says the Government should put out a welcome mat for the Sri Lankan asylum seekers docked in west Java.

So far the Labor movement has been broadly uncritical of the Prime Minister's approach to the 255 asylum seekers intercepted by the Indonesian Navy.

But Paul Howes, who is also the vice-president of the ACTU, has now broken ranks.

He has urged the Government to seize the moral high ground and ensure there is no return to the divisive debate of 2001.

"The 2001 election was a real dark blight on our nation's history. I would expect rhetoric and crass racism to come from the Coalition," he said.

"There was much community resentment and opposition to Vietnamese refugees being brought into our country," he said.

"The Vietnamese boat people of the 70s have made a lasting, incredibly valuable contribution to the development of our nation.

"I don't think anyone in Federal Parliament would dispute that. We need to make sure that with future waves of migration, that we don't make those same mistakes time and time again."

The Government argues that not allowing asylum seekers to land on Australia's mainland sends a tough signal to people smugglers.

But Mr Howes says the fundamental issue is that this stance is sending the wrong message to the Australian community.

"Not the men driving the boats, but the individuals on the boats - those children, those women, those men fleeing circumstances of which most Australians couldn't even imagine," he said.

He says Australia should not ship asylum seekers back to countries that have not ratified the United Nations Convention on Refugees, such as Indonesia.

The Sri Lankan asylum seekers, who are docked in West Java, ended their hunger strike at the weekend, saying they would leave the boat if a representative from the United Nations High Commissioner for Refugees agreed to meet them.

It is the job of the UNHCR to assess asylum seekers' claims for refugee protection.

The UNHCR says it is ready to assess the protection needs of the Sri Lankan asylum seekers if asked by the Indonesian Government, but the agency says it is yet to receive a request.

The asylum seekers' boat got into difficulty in international waters. The patrol boat, HMAS Armidale, asked the Oceanic Viking to pick them up.

That is where they remain - in Indonesia's search and rescue zone - while the Federal Government decides whether to send them to Christmas Island or Indonesia.

How does encouraging "humanitarian" immigration help either the current social, economic and environmental situation in Australia, or the crisis in the countries the asylum seekers are coming from? What are the real advantages in the long-term?

Scott the short term advantage of saving peoples lives is not to be understated! By that logic countries should not have taken in Jews fleeing the Holocaust as it didn't help defeat the long term problem of anti-semitism.