Fun and Games in the lead up to QLD elections

There must be something in the water this week as politicians, billionaires and religious zealots converge on Queensland in the days before this weekend's state election, sparking national controversy and protests.

This week QLD billionaire mining magnate Clive Palmer has met shock and muffled laughter over his allegations that the CIA are bankrolling the Greens and Greenpeace in Australia after their leak of a plan called "Stopping the Coal Export Boom" based on their analysis of the coal industry damaging the Great Barrier Reef, “Boom Goes the Reef” [read it here]. Palmer's mining concern is behind what could be potentially the country's biggest source of carbon emissions, the China First coal mine proposal for central Queensland. The China First proposal, if it goes ahead, will destroy Bimblebox Nature Reserve [Find out about it here] and will contribute 3291 million tonnes of CO2 over 20 years to the atmosphere [Read report here]. Drew Hutton, one of the greenies singled out by Palmer, has suggested he might sue him for his allegations of "treason". QLD Greens leader Andrew Bartlett responds [here]. The CIA have also issued a denial [here].

Meanwhile maverick former national's member Bob Katter has launched a hip-hop video [here]. Heart Ministries, who support Katter's views on homosexuality, are touring the country in a truck emblazoned with anti-gay propaganda that implies gays are pedophiles. The truck was graffitied on a recent visit to the Rainbow Region (Lismore) [here]. Thousands are expected to protest the arrival of the anti-gay truck in Brisbane on Thursday (Mar 22), where it intends to "pray the gay away" [here] Katter's anti-gay sentiments have been decried by his very own (gay) brother Carl and he is doing a great job of alienating a large proportion of the electorate [see Carls comment here] . Bob's own daughter has been in court this month on assault [here].

Finally, the corruption stoush between Premier Anna Bligh and LNP leader and former Brisbane Lord Mayor Campbell Newman has not abated. Billboards declaring Newman's “Web of lies” have appeared in recent weeks statewide but concentrated in the electorate of Ashgrove which Newman must win to retain Premiership if the LNP win. The LNP's back up plan is to get some poor newly-elected sap from their own party to quit so he can run in their seat if he doesn't win his own. Newman recently broke with the party to declare (the blatantly obvious)that Joh Bjelke-Petersen was “corrupt”, in an effort to make himself look good [here]. 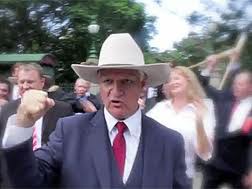 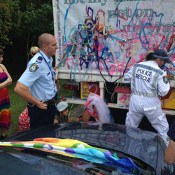 Re: Fun and Games in the lead up to QLD elections

when we'll we see something better?