A PDF of the report can be read by clicking here.

A delegation of Australian child's rights advocates and experts is in Geneva briefing the United Nations Committee on the Rights of the Child on Australia's failing to properly protect the rights of Aboriginal and asylum seeker children. They will point out that indigenous children have mortality rates three times higher than their non-Aboriginal peers and that around 400 children are currently being held in immigration detention.

RayJackson, the president of the Indigenous Social Justice Association, has had a look at the report compiled by the campaigners:

Although dated June this year it is the first time I have seen it.

There have been other reports rebutting the federal government's infamous intervention but this is the first one that is solely based on the UN Convention on the Rights of the Child. I believe Australia is a signatory to that convention but, as is shown, they fail in this area.

For many years now Australia has been under the UN spotlight for not fulfilling its human rights obligations but especially when dealing with the traditional owners of this country, their communities and families. We have had hypocritical governments, at several levels, for far too long and it is time we, all Australia’s citizens, called them to order.

The report by the group 'Concerned Australians’ is a worthy and excellent report and I express my appreciation to those involved in its genesis and production.

This report, I would argue, surely satisfies every argument by the government that their intervention has not worked, will not work and any tinkering around the edges to allow a second intervention to be introduced will also lead to an abject and total failure.

This report clearly shows the criminal and irreparable damage that is being done to the Aboriginal children of the Northern Territory and I doubt if any parliamentarian in federal parliament has even bothered to read it and the quite sensible and positive recommendations that go with it. The solution will be cheaper than the overblown financial disaster that the Gillard government still wants to push into the Aboriginal communities that they have targeted they need to save. All I can say to the parliamentarians is ..................heal thyself!!

The first example of the horrors the communities are suffering under the federal intervention is shown in the area of housing. For some 4 years now the Howard, Krudd and Gillard governments have come up with one more failed miserable plan after the other. The millions of dollars that have been swallowed greedily by bureaucrats and shonky builders is well known whilst housing units built, not refurbished, can be found to be in single figures. The schemes must be scrapped and a new start made that would include the building of the houses by Aboriginal men and women assisting in the respective communities.

The second eye-catching example of the differences between the Northern Territory and mainstream Australia is the price of basic but healthy foods that are recognised as being so important for the needs of a growing child. The government could actually in the long term save dollars by properly subsidising the cost of transport of these foods to allow them to be more favourably compared to city prices. With the singular exception of beef that is cheaper in Katherine and Beswick/Wugularr than in the cities (thanks to us being forced to have to pay the export price for our meats and other goods) the mark-ups are quite steep and force families to stint on healthy foods for their children. I believe in the interests of the good health of the children and youths in the communities there must be some firm decisions made as to the sale of junk foods similar to our tuck-shop policies in our schools.

First to go would be the cola drinks, among others, and the sale of unhealthy confectionery and foods.

The third example given by the report is an absolute horror and for a government that claims to want 'a clever country' and its often avowed desire for an education revolution to take place in the communities, this report shows how much their weasel words, based on racism, is in fact the case. Education has always been tough for Aboriginal children. It was not so long ago that the parents of non-Aboriginal children could, and would, object to the presence of Aborigines in the classroom and the school would remove them. On some missions there were no qualified teachers and the wife of the mission manager would attempt to educate the mission children. Her level of literacy and numeracy was not seen as a barrier.

Mainstream education was based on a racist and historically biased curriculum and one strictly based from 1770 on only. We learnt more about the geography and history of England, especially its royalty, and how the explorers of this country since the invasion found all sorts of things that we Aborigines had known for tens of thousands of years. It is still debatable as to how successful the current education system is. Certainly in the communities the need is for bi-lingual learning but the government still pushes for Australian language teaching only.

The education problems of today can be easily sheeted back to then-pm Bob Hawke. In 1991 the commissioners handed down 339 recommendations arising from the Aboriginal deaths in custody enquiry. Hawke initially accepted r290 in its entirety but then, as usual under pressure, changed his mind.

There are, of course, other recommendations dealing with other educational issues in other areas but r290 is the most important as it would have introduced Aboriginal studies to every level of the educational systems. Hawke initially believed that it should be mandatory but resistance by other forces made him change the introduction to a voluntary basis. That decision has set our people back 20 years as less than 10% of the educational institutions accepted Aboriginal studies as part of their curriculum.

Try and imagine where Australia as a whole would be had Hawke stuck to his guns as he did with the Coronation Hill decision to disallow mining in 'sickness country'. He ran away from land rights legislation, similar to that introduced into the Northern Territory, and buckled to the power of the mining industry.

Education is a right for everyone in Australia, no one would argue against that, but surely it must also be a right that all educational units reflect a common standard, regardless of cost or place. We must be equal to our right of education or are we to be forced back to the education systems of the 19th century. Do our children in the Northern Territory matter less than those in the capital cities? I would hope not.

This report clearly shows why the UN is pissed off!

The 15 recommendations of the report (that I strongly endorse) give the federal government the correct plan to accept their responsibilities under the UN Convention on the Rights of the Child. 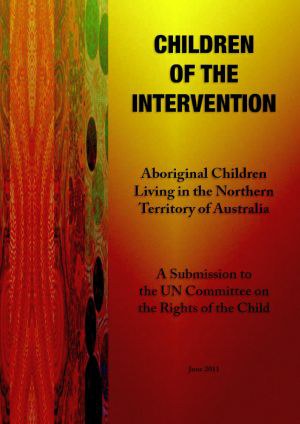 Read through www.whitc.info at this point

Ray, I Invite You to "Visit" and to "Read Through" www.whitc.info

Limited English is not only detrimental but can be dangerous!!

“The study of English enables students to make sense of, and to enrich, their lives in personal, social and professional situations and to deal effectively with change. Students develop a strong sense of themselves as autonomous, reflective and creative learners".

( This makes Sense. Limited English is not only Detrimental but can be Dangerous !! )

"Tiga Bayles" places a lot of emphasis on "It's Magic" ( his term ) When English is the second or even third Language of Aboriginal Students. What if a Student dies because they couldn't communicate very well in English ? There is no doubt that this happens and has in the past. Would that child's brothers and sisters or parents think it Magic or Magical !? As director of the “Murri School” does his View and Attitude take precedence ? Do they impact on the Curriculum. ? Education is Critical. A Specialist's Domain !!
And English is Obviously, Crucial.
What Qualifies Tiga Bayles as a “Director”of a School !?
Well there is No Point in asking Chris Sarra or Stephen Hagan !!
They Obviously Don't Want to Go There !!
I'm Jacky Jacky !? I know Nothing !?

Wherever there is any chance of an education or when education is an option, allmost everyone would try to take advantage of it whenever possible and engage their children.
There was a series of shows on TV
a few weeks ago about India and the successes
of the Indigenous peoples of different cultures.
The divide between the rich and the poor was obvious.
But the one thing they all had in common, was the Desire and the Focus on Education. The poorest people worked hard and all day for a very meager wage. Something like about two dollars ( US$2 ) a day.
Yet they had no hesitation in spending this money on getting their children to learn the Magic Language, "ENGLISH".
With
No Mention or Discussion of Cultural Appropriateness.
No mention or Discussion of Second or Third Languages.
Nothing of Bi-Lingual Education.

My Aunt, an academic, teaches Aboriginal languages that nobody speaks any-more !! ( uni job of course!! and to Aboriginals, of Course!! ) With the very high rate of Aboriginal People going to and will be going to hospital ( as I have been ! ) ENGLISH IS CRUCIAL!! OR DIE !! Why encourage languages that doctors don't understand !! These Bloody Aboriginal Academics !! They are Dangerous in Their Ignorance !!
( and getting well paid !! )
As Amanda Vandstone observed,
it's more about feeling good than doing good !!
The Feel Good Industry? ( FGI )

>>“On some missions there were no qualified teachers
and the wife of the mission manager would attempt
to educate the mission children.
Her level of literacy and numeracy was
not seen as a barrier”>to be continued. or, "Work in Progress" (alb)

You may find ‘concerned Australians’ report CHILDREN OF THE INTERVENTION - Aboriginal Children Living in the Northern Territory of Australia as well as the Child Rights Taskforce’s report Listen to Children - 2011 Child Rights NGO Report Australia at http://www.concernedaustralians.com.au/.

Would you please further circulate as widely as possible.