The makeup of Australia’s parliaments is racist

By Gerry Georgatos - courtesy of The Stringer - http://thestringer.com.au/ - The presumption that Australia’s modernist racist past is being whittled away has long been a fallacy and every once and a while shows its hand. The modern Australian nation arrived on the back of invasion, apartheid, genocidal policies – justified by the worst forms of racisms. The invaders continued on as oppressors and wrapped racist narratives around the dispossessed and oppressed. The modern Australian nation was embossed with The White Australia Policy and a racialised and racist imprimatur, its Constitution. Whiteness was sold as the gospel, and non-White was judged viciously, abhorrently, abominably – from the presumption of peoples as ‘Stone Age’, ‘child-like’, ‘heathen’, ‘irreligious’, ‘unchristian’ – whether they were the First Peoples or from non-Anglo-Celtic/Saxon/Jute regions of our world.

For a long while since the invasion of this continent, the narrative was either keeping people down – the First Peoples – or keeping them out – non-Anglo culturally diverse peoples. Where are we today? Assimilation into the dominant oppressor narrative is the only passage and reward for those who in Australia’s modernist racist past were kept out. Whiteness sadly remains the stricture despite this nation’s appearance of multicultural blend – of citizens from more than 180 nations, from hundreds of cultures and despite more than a quarter of the nation’s population born overseas.

How then does Anglo-Celtic/Saxon/Jute Whiteness succeed in controlling, informing, dictating the Australian narrative, one that by now should be Diogenic but is no less parochial than the worst periods of the 20th century? The world’s diasporas in Australia are mired in inequalities, racial, social, political and civil. We only have to look at the makeup of Australia’s parliaments and of the Australian media to understand the entrenched racism – even if we label it institutionalised racism, as if this to some is somehow less than racism, somehow presumptive of a step in the right direction from the ugliest forms of racism. But racism, whether by veil or layer, is racism.

The makeup of Australia’s parliament is racist. Let us look at the federal parliaments – the House of Representatives and the Australian Senate – 226 representatives. Forget that some were born overseas, the statistical narrative that says it all is the one about the Whiteness of our Australian parliaments – 213 lay in this category, with the rest – 13 – arguably not. You could not bleach our Australian parliaments more ‘White’. They do not reflect the demography of this nation’s multicultural landscape. There is no justifiable excuse for this any longer – as we now have second and third and fourth generations of peoples whose ancestors were the waves of migrants who have come from regions of our world that The White Australia Policy kept out.

Prime Minister Gough Whitlam sought to journey Australia in a new direction but we have since abysmally failed. He implemented The Racial Discrimination Act 1975, attempting to condemn The White Australia Policy into an arch-racist past. Australia, dominated by a majorly conservative class and apothegms, was in effect trying to catch up with social movements around the world – such as which led to the United States of America’s Civil Rights Bill 1965, and the more liberal precepts at the time in most of Europe. For Australia to be at least seen as striving for equality – where no-one is less or more than any other – it had to formally replace The White Australia Policy. This policy discriminated against everyone non-Anglo-centric.

But Whiteness, Anglo-centric White – continues to dominate and control. The premises and assumptions which have their origin-of-thinking in generations past are still passed down, in one form or another, generation after generation. Through this uninterrupted passage, the generation that crafted, penned and delivered The White Australia Policy, continues to influence the policies and legislation today – way of life and views of the Australian world.

There is no excuse justifiable that in 2015, 95 per cent of the Australia’s federal parliamentarians are the children of its modernist racist Whiteness, of the colonial White past. This is not an inadvertent happening, it is an occurrence carefully contrived. The grip is as tight as is possibly imaginable. Where a nation does not reflect the demography of its people, of its makeup, does not reflect this demography in its parliaments, in its corporate boardrooms, in its mainstream media then it is by cause and effect. It is impossible for this to be occurring by chance.

The veils and layers of racism are myriad and most Australians whether complicit in one form or another or whether reactive, we are all hostage. Australia is often described as a socially conservative nation, but how it should be described is as a White dominated nation – of a White oppression. The presumption of Australia’s conservativeness is borne out of its racism. To protect the phenomenological modernist Whiteness, Australia’s rigid conservatism had to be robust. It stifled all forms of social change agency in order to reduce the prospect of any potential change agency threatening the White Australia grip. Australia does not have a history of great internal contests and struggles in terms of unfolding human rights, social justice and equality. The Black Power movement of the 1970s was the only one. Australia’s affluence, owned predominately by its Anglo-centric dominants, have not driven social change to the extent that it affirms and includes all Australians – this is self-evident. There will only be a striving for equality when it is reflected in our parliaments. Political parties must part with the racism and lead the way, for they are the worst racist offenders. Every Australian political party is a party of the White Australia Policy – Whiteness right throughout. Tokenism does not count, it is an insult, it is manipulative, it is hurtful and it is damaging.

The Anglosphere holds hostage our parliaments.

The origins of any change in Australia are usually urged by external factors – from outside Australia’s borders – by social changes elsewhere in our world. And yet because of the conservative strictures in this nation borne of the bent to prevail racism, to prevail Whiteness there has always been a lag in social changes that are establishing elsewhere in the world. It can take a decade or two for Australia to begin to make a move and catch-on to the cultural shifts.

Our parliaments typified and continue to typify the Anglosphere as they work to their exclusive interests. No political party can distance itself from its near exclusive Whiteness, from its racism – it must be stated. The only way they can end the racism, journey the ways forward is to reflect within the makeup of their political party the demography of this nation. Each political party should immediately stand down the majority of its elected members and replace them with non-White Australians, to the best of their ability reflective of the nation’s citizenry – for as long as they do not, they perpetuate racism and all the excuses in the world do not count.

Australia will only recognise the human race when it reflects it at every opportunity.

More than 90 per cent of Australia’s parliamentarians are of an Anglo-centric origin, and of this 90 per cent, more than 90 per cent have more than a century of familial history on a continent where their relatively recent ancestors dispossessed peoples that walked the lands for tens of thousands of years. The dispossession is therefore in the minds of the descendants of the invaders – they know all too well the role their grandparents and great grandparents played in taking control and in how they justified it; therefore consummating premises founded in origins-of-thinking generations old.

The first Prime Minister of Australia, Edmund Barton was one of the racist authors of The White Australia Policy. The highest office in the nation penned the racism. Addressing racism is a cognitive experience, and as I describe, there are many veils and layers to racism. Therefore where racism is not addressed, where equality denied, where affirmative actions are not enabled, this is racism.

Governments are not the only mirrors of this nation’s consciousness – the media too does not reflect the demography of this nation. Media panels are effectively White only bastions – with ‘Black’, ‘Brown’, ‘Yellow’ scoring a gig if they play by the rules, if they do not challenge the tight stricture. Our economy is run by corporate boards and institutions that are White dominated. Instead of the coalescing of humanity, the language everywhere is about shoring up White power – it is signified even when we refer to the ‘Asian Century’ – an intended divisive term to promulgate fear, to shore up White power, for so long as White power dominated the world it perceivably protected all those Whites who were flung to every stretch of pernicious empires – White ‘colonial empires’.

What our parliaments, political parties, media and corporate bodies and institutions get away with in supporting exclusively White power – at the expense of humanity – washes throughout every layer of society. Even in social justice groups, even among grassroots activists who tinker with social justice and human rights, it’s still White power. Whites want to speak for Blacks, Brown, Yellow; White activists want what the oppressed should be saying in their language, in their terms, polished up in White terms of reference. They miss the point and defeat the purpose – all up, in the end as do our Governments and media holding everyone back.

At the core of things, our Governments and our media do not want Australia to hear the truth about itself; to hear about this nation’s vile racism. They do not want us to understand that the future we are building will be racially divided and with the never ending bent for the strictest assimilation. The future will bring on racism that we have not known the likes of during the last half century – that will be disturbingly discriminatory, disempowering, oppressive and at times violent.

In the end all structures are people. Our Governments, political parties need to understand, to respect and to reflect that all lives indeed matter.

The original article can be found at The Stringer - http://thestringer.com.au/the-makeup-of-australias-parliaments-is-racist... 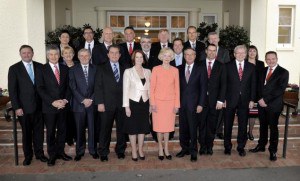