Do not play with people’s lives – Climate of death

By Gerry Georgatos - courtesy of The Stringer - http://thestringer.com.au/ - Despite the standout work of various individuals, our Governments have failed to respond to the catastrophic humanitarian crisis sweeping this nation, that is taking the lives of children, young adults, of human beings denied the sense of hope that the majority of Australians enjoy. The statistical narrative is startling and indicts the nation but there continues an effective silence. Our governments have normalised inequality and injustices.

One in 19 of Aboriginal and Torres Strait Islander deaths are registered as suicide. This is an abomination, moral, political and otherwise.

However because of underreporting issues the statistical narrative is indeed much worse. I estimate it is one in 10 to one in 12. This is an abomination, moral, political and otherwise.

The Aboriginal and Torres Strait Islander populations of the Kimberley and far north Queensland endure the nation’s highest suicide rates – up to 8 times the overall national trend and near double the world’s highest national trends. A climate of death – premature and unnatural.

Another staggering statistical narrative – no less than one in 10 and possibly up to one in 6 of all Aboriginal and Torres Strait Islanders living have been to jail. This is nothing less than racialised imprisonment.
In Western Australia, one in 13 Aboriginal adult males is in prison today – from a racialised lens, the world’s highest jailing rate.

As long as Australian Governments fail to respond to these crises and fail to respond comprehensively, they are responsible for the suicides, the familial and community distresses. While this narrative of human misery and suffering, this narrative of death continues – and it will worsen – then there is no ‘closing the gap’. Of all the world’s middle and high income nations with relatively recent colonial oppressor histories, Australia has the widest divide between its First Peoples and the rest of the population. It cannot be argued that there is any legitimate closing of the gap when more Aboriginal and Torres Strait Islanders are being jailed than ever before, when there are so many suicides.

There are many of us doing what needs to be done but more of us need to be involved – particularly our Governments and their instruments. The ways forward are not rocket science, but the political will is an obstinate one which has denied the ways forward, abominably. In the end, I rest tired but remain in the understanding that we must improve the lot of others and remove the barriers that deny equalities. Our days under this sun will pass within the flicker that we are caught within, our time cast to the ages, done to the eons that distance from the here and now but while we are within this flicker, there is no greater legacy than to help one another, to improve the lot of others, to save lives. All lives matter.

Declaration of impartiality conflict: The author of this article, Gerry Georgatos, is a suicide prevention researcher with various national and other projects and is also a community consultant with the Aboriginal and Torres Strait Islander Suicide Prevention Evaluation Project (ATSISPEP).

Originally, this article was published on The Stringer and can be found here - http://thestringer.com.au/do-not-play-with-peoples-lives-climate-of-deat... 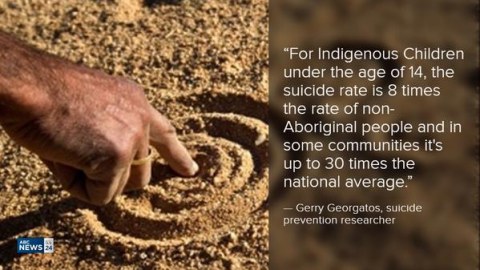