By Gerry Georgatos - courtesy of The Stringer - http://thestringer.com.au/ - Globally, the impacts of colonialism have seen a widening divide between the First Peoples of lands they once inhabited effectively uninterrupted for tens of thousands of years and the new dominant populations who at most are only hundreds of years old. The dominance of these new populations, whether they are the majority or the minority, has been delivered on the back of ruthless oppressor/oppressed dichotomies. Today, suggestively in the anathema of presumptive post-colonialism, the impacts have become less. But every measurable indicator states a different story, maybe even a dark and sinister tale.

The bloodshed of colonialism continues in other forms – in narratives of human misery and suffering, in a climate of death; in the suicides and in the premature and unnatural deaths. The descendants of the invaders are now established as the governments, ruthlessly gripping power. Modalities such as institutional racism continue the one-sided deliverance. Marginalisation appears entrenched. It is impossible to be without marginalisation when there is oppression unless it is eliminated by genocide. In my making these statements, the soldiers and advocates of the neoliberal colonialist regimes argue we are perpetuating trauma and that we maintain the oppressed as the victim. They argue that we need to move on. But move on from what and to where? How?

Australia is the world’s 12th largest economy and one of the world’s wealthiest nations however of all middle and high income countries, Australia has the world’s widest divide between its First Peoples and the rest of the population with all the measurable indicators. Two of the indicators are the suicide and jail rates. From a racialised lens Australia’s First Peoples fare worst in the world. If you are an Aboriginal and/or Torres Strait Islander aged 15 to 35 years, one in three deaths in this age group will be registered as suicide. Suicide is the leading cause of death in this prime of life age group. If you are an Aboriginal and/or Torres Strait Islander child 14 years or less then you are at least 8 times more likely to suicide than a non-Indigenous Australian child. In some regions the suicide rate is 10, 20 and 30 times. It is the second leading cause of death for this age group. These are the world’s highest rates of suicide of First Peoples in these prime of life age groups.

But the meritocracy and the chattering classes, who are predominately borne of the once oppressor classes or who had assimilated to these classes continue the oppressor/oppressed dichotomy – and institutionalise racism – by arguing the ‘move on argument’ and that people should improve their own lot, that there is opportunity all around them. However the Homeland communities, the majority of them have been either degraded by one government after another, or forever denied the social infrastructure and suite of services enjoyed by non-Indigenous communities.

There is next to no hope on the horizon for these communities to navigate without impost their two cultural settings but nevertheless their situational trauma is compounded into multiple and composite trauma by the statements of the oppressor and assimilationist; that they should shut up, move on and grab opportunities even where they do not exist! In other words settle for what is, even if it is unfair or comes with sacrifice.

In fact, I do see these communities, even the most degraded, do their best and with a deep silence – even if they can go nowhere or even if they are going backwards – and it breaks the heart, the spirit of the young. There is a lot of displaced anger, on the self and on each other. There are a lot of broken spirits in a sea of courage.

Oppression, assimilation, racism have culminated so many issues, entrenching them, that even those who tinker with social justice, they move away from all concept of addressing the underlying factors and instead tinker with issues further along the spectrum till sadly they lose all sight of the underlying factors – this does suit the institutional racists and those who can then turn on the oppressed and drop all blame on them.

Then there is the other ‘indicator’, the one where a lot of the above leads to – jail. Prison is an abominable experience – nothing redemptive or positive about the prison experiment. It has been my experience in general that people come out of prison worse than they went in. Today, we have the drama of the penal estate monetized and that an industry has been formed around it, in addition to the argument that as a society we are becoming ever so more impatient and exploiting the prison experiment/industry to relocate out of sight people that we do not want to help, who we are not prepared to dish out equality to, to whom we are not prepared to assist in improving their lot. As a result we are building underclasses of poverty, marginalising humanity, fracturing society.

Prison never had to be about bars, steel doors and cages. The United States of America is the mother of all jailers with nearly one per cent of its total population in prison. But Australia jails its First Peoples at a higher rate – chasing down two per cent of the Aboriginal and/or Torres Strait Islander population. We are heading to two per cent of Australia’s Aboriginal and/or Torres Strait Islander population in prison. It is indeed racialised imprisonment. At least one in ten and up to one in six of Aboriginal and/or Torres Strait Islanders living have done jail. Australia is the mother of all jailers of First Peoples, with the Northern Territory and Western Australia the worst offenders. The suicides and the jailing are indeed despicable, abominable indirect and direct forms of institutionalised racism – the oppressor’s tools. The jailing is just not the result of the impacts of institutionalised racism but is effectively a tool – the locking of people and punishing of people are the direct result of the betrayal of all hope, the result of the racialised economic inequalities and of the constant rubbishing of people’s historical and contemporary identities. The suicide crisis is the direct result of the racism, of the racialised economic, social and political inequalities. They know why the suicides are occurring but our governments and their instruments continue on with the relentless damage.

Where are we heading?

We are not closing any gaps and we are not improving the lot of the marginalised or of the majority of the nation’s First Peoples. For all the good stories are outstripped by a tsunami of poverty related issues that are flooding us with a narrative of despair – abysses of hopelessness – culminating in broken peoples, in a climate of racism. In turn to hide from the shame, the governments and their advocates – some of whom genuinely deluded – turn on the oppressed, on the marginalised and the broken, damning them with blame and shame, relentlessly.

In Western Australia the poor finish up in jail – low level poverty related crimes now result in a quarter of the State’s prison population. The State is planning to introduce additional mandatory sentences for 16 and 17 year olds who are convicted of violent burglary. The Bill has already been passed and will become the law in November. The State Premier, Colin Barnett is concerned about the rights of one layer of society but possibly not about the other layer I have been describing – the marginalised.

Aboriginal and/or Torres Strait Islander children in Western Australia are 53 times more likely to be jailed than the non-Indigenous children. Mandatory laws have failed to reduce offending, incarceration numbers, so why then this bent? Addressing economic inequalities and dealing in redemptive policies are much cheaper and obviously of greater benefit for everyone and this is well known, it’s not rocket science. Maybe in the end, the oppressor has done it this way for so long that they have cruelly hardened themselves towards the oppressed. The ways forward are not myriad, they are not complex, they are obvious but it is important for the time being to continue portraying the true landscape and the political reality till as such time the informing of the ways forward will be finally heard and have some meaning.

This article was originally published in The Stringer and can be found here - http://thestringer.com.au/1-in-6-jail-rate-and-1-in-3-suicide-rate-are-t... 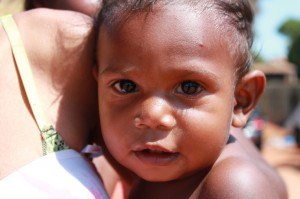