ISIS have killed at least 30 people for "being gay", UN told

Islamic State has claimed responsibility for killing at least 30 people for sodomy, the head of an international gay rights organisation has told the 1st United Nations security council meeting in New York to focus on violence and discrimination against lesbian, gay, bisexual and transgender people.

Jessica Stern, the executive director of the International Gay and Lesbian Human Rights Commission, told the council that courts established by ISIS in Iraq and Syria claimed to have punished sodomy with stoning, firing squads and beheadings and by pushing men from tall buildings. At the executions, hundreds of people, including children, cheer jubilantly. If a victim did not die after being hurled off a building, the people stoned them to death.

Subhi Nahas, a gay refugee from the Syrian city of Idlib, told the council that President Bashar al-Assad's government - "launched a campaign accusing all dissidents of being homosexuals" when the country's uprising started in 2011. Soon afterwards gay hangouts were raided and many people were arrested and tortured. "Some were never heard from again," he said.

When the al-Qaida-linked al-Nusra Front took Idlib in 2012, he said, its militants announced - "they would cleanse the town of those involved in sodomy". Arrests and killings of accused homosexual people followed. In 2014 when Isis took the city, the violence worsened, he said.

"It's about time, 70 years after the creation of the United Nations, that the fate of lesbian, gay, bisexual and transgender persons who fear for their lives around the world is taking centre stage," said the US ambassador Samantha Power, who organised the meeting with Chile's United Nations envoy. "It is about time the issue of violence and discrimination towards lesbian, gay, bisexual and transgender people is highlighted", she said.

Fear of the extremist group, which controls about a third of Syria and Iraq, was fuelling violence by others against lesbian, gay, bisexual and transgender individuals, she said.

Jessica Stern stressed that persecution of lesbian, gay, bisexual and transgender people in Iraq and Syria began long before the emergence of ISIS, and called for United Nations action to relocate these persons most in need and to bring the gay community into broader human rights and humanitarian initiatives. 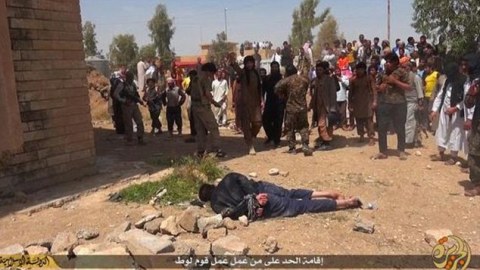