By Louise Tan - 15.7.2015 - The homeless are increasing according to every homeless advocacy organisation. All these organisations whether the Salvation Army, Mission Australia and the Council of Social Services are stating It is getting harder to provide for them. They do not have enough to go around. Australia is in the grip of increasing hardships. The poor are getting poorer. The homeless have no chance. But I have been heartened by a campaign by that veteran social justice fighter, Gerry Georgatos – a campaign for homeless friendly precincts.

What are homeless friendly precincts?

Georgatos describes them “as a sliver of human dignity” and the “least we can do, that is if we believe ourselves pursuant of a civil society”. You can find out more at The Stringer – http://thestringer.com.au/ – Georgatos writes prolifically for The Stringer, a site edited by media academic and PhD researcher, Jennifer Kaeshagen. But The Stringer is no ordinary online news site. The Stringer is all about campaigning for one cause after another, about working to a better world. Kaeshagen is also the founder of the First Nations Homelessness Project and secures homes, shelter and essential resources for chronically homeless families and individuals.

Georgatos has stated that these homeless friendly precincts should be in “every major hub of every Australian city and town”. he argues that these precincts can be as little as “a few hundred square metres” of “small storage lockers, showers, laundries, a treatment space, rest area” and where providers can come to assist the homeless. He said these precincts could organise rostered services such as a barber. But he said that they can grow to be much more including extended precincts “of disused public dwellings” where food halls can provide meals with dignity, where beds can be provided. He stated that there are many disused public buildings in many locations throughout Perth. He has secured the support of some of Perth's mayors, of every state politican that he has lobbied so far and he is continuing this charge.

I am holding out hope that we may see the world-first of homeless friendly precincts in Perth.

Why am I holding out hope when all too often we hear the good idea but in the end it goes nowhere?

Because of Georgatos himself. I have followed his work for many years. He is one of the most astute campaigners in the nation. His academic acumen but led by his huge heart has made many of his social justice campaigns success stories. He can get himself involved in controversy and alienate some but this is because he is both cutting edge and thinks outside the box.

Georgatos was significantly responsible for the release of Indonesian children from Australian adult prisons. These children came to Australian shores as cooks and deckhands on asylum seeker boats. He discovered these children in his visits to prisons and blew the whistle. For a time Georgatos was banned from visiting prisons – banned from visiting prisoners who he was guiding into education! But he launched a magnificent multilayered campaign to have these children released, involving many parties – the media, the legal fraternity, politicians, Indonesian and Australian government officials and finally the Australian Human Rights Commission. Without Georgatos coordinating this multifaceted campaign and in pulling everything out of the hat these children may have remained in prison. Georgatos even secured a meeting with Prime Minister Julia Gillard.

In securing the release of an Indonesian boy, Hadi, from an adult prison, seven times Walkley winning journalist Stephen Pennells in July 2011 wrote of Georgatos - "If it wasn’t for human rights advocate Gerry Georgatos, who ran into Hadi during a visit to Hakea four months ago and has been pushing his case with anyone who will listen ever since, the boy would have remained forgotten."

His campaigning skills should be artworks to study by even the best seasoned campaigners, to draw from. He has had successes with prison and criminal justice reforms. He has had a huge hand in campaigning for the retention of the Custody Notification Service in NSW and for its future implementation in Western Australia, which he describes as "the nation's backwater" and states is “the mother of all jailers of Aboriginal people” and where “one in 13 of Aboriginal adult males are in prison today”. His advocacy for animal rights was established in the 1980s and around the same time he got involved in refugee human rights, starting at Galang refugee camp in Indonesia and continuing to this day. His refugee rights campaigns have seen the release from jails and detention centres of asylum seekers and the relocation of children from deplorable conditions in Darwin’s Northern Immigration Detention Centre to the lesser evil of community detention in Brisbane. The brunt of his work is behind the scenes and while what we see in the media or on the internet is just a scratch on the surface of the mass of what he coordinates.

Recently, the Christmas Day born 53 year old campaigner was significant in the saving of the life of a hunger striking asylum seeker – 25 year old Saeed Hassanloo. Our good old federal government who we elected to represent us kept secret from the nation that this young man was hunger striking. On the 35th day of the hunger strike he was transferred from a detention centre to Perth Royal Hospital. Georgatos campaigned for him and captured broadcast media, assisting the refugee rights movement who were coordinating vigils outside the hospital to capture national media attention. Hospital staff showed the young man the national news broadcasts and footage of the vigil. His spirits were lifted and on the 44th day of the hunger strike while the Minister for Immigration had readied a statement of Hassanloo’s passing, the young man was inspired to end his hunger strike.

Though an academic and researcher, mostly in suicide prevention and in racism, Georgatos was a Murdoch University guild general manager for a number of years and used his position to intake into university people who had not completed their high school education or whose lives had been disrupted. Over a number of years Georgatos brought into the university and other tertiary institutions through alternative education programs about 140 former prison inmates, many homeless and others. He created Students Without Borders which involved many students in programs assisting these new but still vulnerable students. He did this to improve their prospect of retention and graduation. He founded the 8Ball computer recycling program. Murdoch University IT students gained academic credit for refurbishing superseded computers that Georgatos donated to students who could not afford them. This program would expand and meet the needs of thousands of Western Australians who were too poor to afford a computer and then to communities around the world. He created other programs too to assist these students at university to achieve quality learning and good marks. Georgatos believes homeless friendly precincts will be an opportunity to reach people. Education providers can reach them, counsellors can reach them, all the service providers could find them there.

The Stringer’s editor, Jennifer Kaeshagen who also manages the First Nations Homelessness Project has been housing homeless families which heavily funded government departments and organisations have failed to house. Kaeshagen has inspired many with her relentless never say die mettle and mostly through well articulated online campaigns. She has mastered social media. This year Kaeshagen has been largely responsible for sheltering the many homeless families and individuals at Heirisson Island in Perth. She has inspired many Perth residents and organisations to support the homeless with tents, resources and food. The City of Perth Council has raided the homeless camp at Heirisson on 9 occasions in the last 4 months, confiscating everything but Kaeshagen has coordinated a remarkable campaign to replenish the camp after every raid.

It is this type of relentless campaigning, activism, never give up attitude by Georgatos and Kaeshagen and by all those they have inspired to do as they do that makes me believe that we will soon see homeless friendly precincts in Perth. 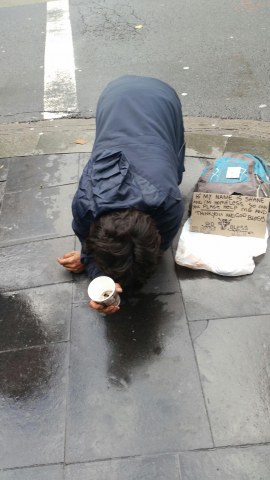 These short speeches by Gerry

These short speeches by Gerry should be heard by everyone:

https://www.youtube.com/watch?v=JDxAn8W65w0 - He says be fearless

http://caama.com.au/gerry-georgatos-speaks-out-on-aboriginal-suicide - This an incredible interview