* Media Release: Michael Anderson, Sovereign Union: ANZAC Day - for those who served in all wars, conflicts and peacekeeping operations

Sovereign Union: The Undeclared Frontier Wars
http://sovereignunion.mobi/content/frontier-wars
"We remember all the First Nations people who died in defence of their lands during the colonial invasion.
We also remember the people who were massacred or died in concentration camps with genocidal intent.
- Why the number of First Nations deaths in the frontier wars matters
- Australian War Memorial should recognise the Frontier Wars: Researcher"

Indymedia Australia: Anzac Day 2015 - Undeclared Frontier Wars Remembrance March - Canberra - ACT
https://indymedia.org.au/events/anzac-day-2015-undeclared-frontier-wars-...
"First Nations and Peoples to bring banners identifying the place and time their people were massacred/murdered/poisoned and by whom
Gather 10.30am Saturday, Anzac Day 25 April 2015; Corner Anzac Parade and Constitution Avenue, Canberra
We also invite supporters to carry banners for those who are unable to be present. We emphasise that this is a silent parade in empathy with the solemnity of the day, wearing black. ... Our action is highlighting a fact. It is not a protest
Contact: Michael Anderson, Convenor, Sovereign Union of First Nations and Peoples in Australia"

Peacebus: Frontier War Storytelling Camp 2015: 15 - 25 April 2015 at the Aboriginal Tent Embassy, Old Parliament House Lawns, Canberra
http://www.peacebus.com/FrontierWars/StorytellingCamp2015.html
"The Camp will be welcoming to anyone and everyone, black and white, with a Frontier Wars story to tell and/or ears to hear. The invitation to participate has been put out to Aboriginal mob all around Australia and to historians and history teachers too. The Camp will have formal storytelling sessions which will be advertised. The Camp will also offer lots of opportunities for informal storytelling around multiple campfires and in multiple shade marquees. ... "

Sovereign Union: Undeclared Frontier Wars Anzac Day Commemoration Videos
[Anzac Day Marches 2011, 2012 & 2013]
http://sovereignunion.mobi/content/undeclared-frontier-wars-anzac-day-co...
http://www.sovereignunion.mobi/undeclared-frontier-wars
"The 2013 March in Canberra on ANZAC Day to commemorate the Undeclared Frontier Wars and the losses of First Nations people who laid down their lives protecting their families, clans and nations across the Australian continent. ...
A group of Aboriginal people and supporters marched in Canberra behind the 11:00am march on Anzac Day 25 April 2012. They marched to commemorate the losses in the Undeclared Frontier Wars across the Australian continent. ...
This is a cut of the 2011 ANZAC Day video above - providing footage of the March day only - see footage of the vigil below. ... "

Sovereign Union: ANZAC day: Black Diggers buck the given history of "white men's business"
http://sovereignunion.mobi/content/anzac-day-black-diggers-buck-given-hi...
29 Apr 14: "I must admit to a proven ambivalence towards ANZAC Day and the celebration or commemoration of that day. Like all school children of my vintage we were taught that ANZAC Day was nothing less than sacred when our brave soldiers, sailors and airmen saved us from the Japanese peril and the fascism of Hitler. Of course there was absolutely no mention of any Aborigines or Torres Strait Islanders who fought and no recognition of women either. This war was men's business - white men's business. ... " Ray Jackson, a Wiradjuri man and president of the Indigenous Social Justice Association. He is based in Redfern Sydney. Ray has devoted decades to the campaign to Stop Aboriginal Deaths in Custody. Ray is tireless in investigating and supporting Aboriginal families whose members are in custody or incarcerated. Ray actively participates in other parts of Aboriginal people's ongoing struggle in this country.

Cosmopolitan Civil Societies: An Interdisciplinary Journal Vol 6, No 3 (2014)
Imperialism, ANZAC nationalism and the Aboriginal experience of warfare
Padraic Gibson, University of Technology Sydney, Jumbunna Indigenous House of Learning
https://epress.lib.uts.edu.au/journals/index.php/mcs/article/view/4190/4492
"Abstract: Aboriginal protest played a key role in undermining the celebratory settler-nationalism of the bicentennial in 1988. In the lead up to another major nationalist mobilisation, the centenary of the Gallipoli invasion on ANZAC Day 2015, extensive official efforts are being made to incorporate Aboriginal experiences into the day, through celebration of the role of Aboriginal people who served in Australia’s armed forces. ... "

Sovereign Union: 50 Aboriginal trackers left behind after the Boer War
http://nationalunitygovernment.org/content/50-aboriginal-trackers-left-b...
"Between 1899 and 1902, fifty Aboriginal black trackers were summonsed by the British forces in South Africa to join the Boer war effort. Griffith University's Indigenous research fellow, Dr Dale Kerwin said that the black trackers came from all over the country but very little else is known about them. He claims they were left behind at the end of the war in 1902 because they were denied re-entry into Australia under the Immigration Protection Act, known as the White Australian Policy."

Subscription to 'WGAR News' is free.

'WGAR News' monitors the media, including alternative media, focusing on:

The role of 'WGAR News' is to facilitate the voices of others, and as such, 'WGAR News' rarely writes its own articles.

'WGAR News' publishes information and opinions from a wide range of sources.
These opinions expressed are not necessarily the opinions of WGAR.

Subscribers can expect to receive about 4-5 e-newsletters each week.

To unsubscribe, email wgar.news@gmail.com and include the words "unsubscribe WGAR News" in the message header. 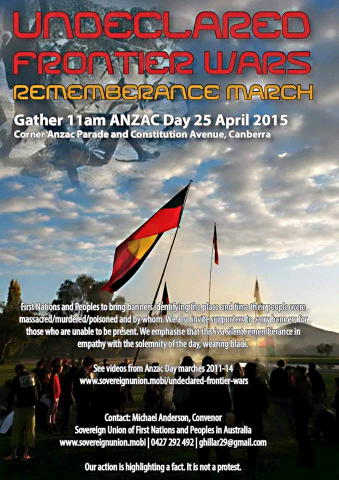 WGAR News: "This day is not for you." AFP prevent Fred Hooper from marching on Anzac Day, Canberra 25 April 2015: Eleanor Gilbert, Vimeo

* Green Left: Letter from the Indigenous Social Justice Association on the death of Ray Jackson

* Paul McAleer, Maritime Union of Australia, Green Left: Letter from the MUA on the death of Ray Jackson