By Gerry Georgatos - courtesy of The Stringer - Nearly two years ago I wrote about the potential closure of up to 180 remote communities – homelands – of First Peoples. My insiders’ claims were rubbished and labelled fanciful and conspiratorial. Late last year, the Western Australian Government announced the potential closure of up to 150 communities. The South Australian Premier followed soon after with a similar announcement, threatening to close up to 100 communities in northern South Australia. Tomorrow, in a national day of action 13 marches and rallies will take place across the country.

I will not insult readers with the narrative that all these looming closures are about some crappy argument about who should pay the pittance municipal bill – whether it should be the Federal or State Governments. It is not about this. It is about a land grab, it is about clearing the vast interior and the top end for miners, developers, commercial interests. Assimilation and racism are being exploited to serve the interests of robber barons and wild west frontier mentalities.

One of the rallies will start with a march from Aboriginal Tent Embassy to Federal Parliament with speakers having flown in from all over the continent. They will be joined by Senator Nova Peris and Senator Rachel Siewert. The closure of homelands is one of the major issues of this generation and will be damned by the future in the ways many today damn the Stolen Generations, damn the apartheid practices of the past, damn the bent for assimilation (which continues).

There will be rallies in Perth, Broome, Halls Creek, Beagle Bay, Hedland and Geraldton – Western Australia has the highest concentration of Aboriginal homelands. In the Kimberley lay the majority of the State’s homelands. I have been to many communities – and the residents are terrified, there is heartbreak and uncertainty. The children are asking what is all this talk about, what does it all mean? It is as if Australia has learned little, very little, maybe nothing at all, from the past, of the relatively recent past. The horrific atrocities and racism of the recent past are remembered and felt by Elders today whose childhoods are of memories of forced relocation, of dispossession, of their abduction from their families, of indenture, of institutionalisation, of their criminalisation, of the vilest racism. After the vile dispossession of the brutal past, of the vile eugenics and of the cruel and horrific discrimination of peoples in every layer of life, it should be unimaginable for the Australia of today to once again dispossess peoples of their homelands, of their communities, of the right to be who they want to be.

Australia’s racist bent to close communities, to steal their land once again, is seeing them do again what inherently was promised would never again occur after the 1967 referendum. Australia’s disgrace has picked up international attention but nevertheless not an iota of conscience has struck the Western Australian Government.

Australia is indicted as the racist mess many of us know it to be. It is no surprise to many that the Western Australian Government is leading this land grab. Western Australia is an insular place – where some of the worst atrocities against the First Peoples were committed; where to this day it continues to struggle with any form of genuine conciliation and redress. It is the richest jurisdiction of Australia, with the nation’s highest median wages, where mining companies have become filthily wealthy, where the robber baron cries foul if First Peoples try to defend the custodianship of their Country. They are hounded by cruel stereotypes, damned to shanty towns – third-world akin – made refugees on own their lands. They speak up and they are criminalised. One in 13 of the State’s Aboriginal and/or Torres Strait Islander males are in prison. Where else do you get this in the world? Western Australia is the mother of all jailers of Aboriginal people. From a racialised lens this is the world’s most horrific jailing rate. The more west we journey across this continent the worse it gets for First Peoples – arrest and jailing rates, homelessness rates, extreme poverty, suicides.

Rallies will also be held in Melbourne, Sydney, Adelaide, Lismore, Bendigo and Bellingen.

Matargarup (Heirrison Island) has re-established its refugee camp, its respite for the homeless. Perth’s homelessness is extensive – with children and large families on its streets, in squats, traps, alleyways, living in tents in bush hideaways just off major highways. This nation’s shame is best described by the fact that 20,000 children under the age of 12 are homeless. This nation’s shame is reinforced by the fact that seven per cent of the Kimberley is homeless, with nearly all of this homelessness comprised of First Peoples. Australia is the world’s 12th largest economy, 2nd wealthiest nation per capita, and ranks number 2 in the world according to the United Nations Development Program’s Human Development Index – but when I disaggregated this continent’s First Peoples from the rest of Australia’s population, in reference to the Index they rank 132nd.

The Western Australian Government does not want to hear that it is racist, but by hell and high water they know they are racist. You would have to be an idiot to not see racism when you dish it out. When you punch someone you would have to be a dumb ass to not realise an act of violence. If the Western Australian Government cannot see what it is doing then we have dumb asses in parliament. They have done enough damage for nearly two centuries. It is about time Australians rose in numbers and attended these rallies and sent a message to Governments – stop the bloody racism, leave the homelands alone you damn nutters.

This article was first published in The Stringer and for more reading go here - http://thestringer.com.au/western-australian-rednecks-govern-stop-the-du... 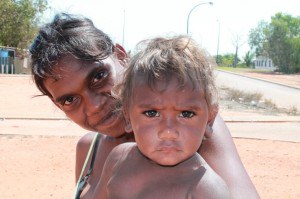