Quality of life for Australians 2nd only to Norway, but for First Peoples 132nd

By Gerry Georgatos - February 21st, 2015 - A couple of years ago, the United Nations ranked Australia second behind Norway in its annual Human Development Index – for public health, social wealth, education, even happiness. But if First Peoples were to stand-alone they would not have been part of that 2nd rating – at the time I estimated they would be 122nd. Two years later, with the major of social determinant indicators going backwards, First Peoples, for quality of life, would rate 132nd.

The United Nations Human Development Index is a measure of the quality of life across 187 nations.

The naked eye knows it is bad for First Peoples in Australia but why is it as bad as I am estimating? We also know that the further west we journey across the continent the worse it gets for First Peoples.

The Closing the Gap Report which for several years tried to encourage a different message – one of substantial improvements – has this year come back in its calendar piece reporting with a fail mark.

Australia is the world’s 12th largest economy, 2nd wealthiest nation per capita, with the world’s highest median wages. But for far too many of its First Peoples it is a nation of shanty towns, third-world-akin living conditions. For far too many First Peoples in one of the world’s most developed nations, live with reduced rights. First Peoples in various parts of Australia continue to languish in third-world conditions despite Australia powering on as the world’s twelfth largest economy. Overall, the Northern Territory is the worst for First Peoples although in many regions of Western Australia it is worse. Western Australia has the highest concentration of Aboriginal communities – 274, most of them in the Kimberley. Many of them are second and third rate existences. It is even worse in parts of the Western Deserts and in the Goldfields and just as diabolical in South Australia’s APY Lands – but so too in some communities in a number of regions in Queensland and NSW.

Several years ago, I wrote about the Northern Territory township of Utopia, 350 km northeast of Alice Springs, as an example of Government neglect – it is third-world and many of its 1,200 Alyawarra and Anmatjirra peoples languish in dilapidated homes and without the suite of public services that most other Australians enjoy. The United Nations Human Rights Commissioner Navi Pillay condemned the deplorable conditions and described the neglect as racism. Amnesty International’s Shalil Shetty described Utopia as third-world.

When I first wrote about this a few years ago, I noted the Australian Government finally meting out some money – $4 million to Utopia for housing refurbishments and facilities – but this is peanuts and would not go very far. I hoped the forlorn at the time that most of this paltry $4 million would not be gobbled up, pocketed bureaucracy and contractor payments. Contractors can pocket up to ten and twenty times going rates. Some contractor payments for paint and repair jobs that should be a few to several thousand dollars hit one hundred thousand dollars. You can build a substantial brand new home for that sort of money.

“Vital community infrastructure will be upgraded in the Utopia homelands in the Northern Territory thanks to a $4.36 million investment from the Australian Government,” said Mr Snowdon.

Ms Macklin obstinately stood by Stronger Futures despite no evidence to prove the Intervention has improved living conditions – in fact most evidence, anecdotal and research, points to the opposite.

“Stronger Futures has a firm focus on improving living standards for Aboriginal people in the Northern Territory – in the bigger communities and also in remote homelands,” Ms Macklin said.

“The Government is providing $4 million for the Centre for Appropriate Technology to deliver a range of projects to help families in Utopia live more sustainably.”

“These will include critical work to make housing safer, helping residents to reduce their energy consumption and improving the safety and reliability of the local water supply.”

The work to improve housing in Utopia was supposed to focus on electrical and fire safety, water and waste management, and washing, cooking and food storage facilities. But several years later it has all got worse for Utopia, which would later become known to the world in international filmmaker John Pilger’s documentary, ‘Utopia’. Since I first wrote about Utopia, and since Mr Pilger’s documentary, one of Utopia’s major community areas, Urapuntja, built around the Urapuntja health hub, was for a while without its water supply while with various social determinant indicators there was regression.

Back to Mr Snowdon and yesteryear and he said the Government would also provide funding of $360,000 over three years for a coordinator position at the Urapuntja Aboriginal Corporation so it can better represent the interests of the Utopia homelands. Well, that position does not really exist, was not heard by Government when it some urgent listening needed to be done when Urapuntja was without water and scabies and illness resulted.

“The new coordinator will play an important role in negotiating and implementing a plan with the Government to address the key areas of disadvantage in Utopia,” Mr Snowdon said.

“We will also employ two Indigenous Engagement Officers to be based in the Utopia homelands. They will be locals who understand the culture and can speak the local language.

“I’ve seen how effective Indigenous Engagement Officers can be in linking residents to important services and strengthening relationships between Government and remote communities, and I’m confident we will see the same happen in Utopia,” he said.

Despite Stronger Futures, Northern Territory First Peoples – 30 per cent of the population – do not enjoy the standard of living that the United Nations Human Development Index report lauded on Australians.

With education – in terms of number of years of schooling achieved and the standard of school performance – Australians are ranked second highest but that would not be the case for First Peoples who do not enjoy quality schooling in many semi-remote and remote communities.

Nothing has improved since the 2011 United Nations State of the Indigenous Peoples report,

“In Australia, an Indigenous child can expect to die 20 years earlier than his non-native compatriot.”

A few years ago, a Northern Territory Select Committee on Youth Suicides reported, “The suicide rate for Indigenous Territorians is particularly disturbing, with 75 per cent of suicides of children from 2007 to 2011 in the Territory being Aboriginal.”

“For too many of our youth there is not enough hope to protect them from the impulse to end their lives.”

It was only several years ago that the West Australian town of Derby and nearby communities, such as Mowanjum, experienced a horrific spate of Aboriginal youth suicides in the one year. For a little while some of the nation’s attention was caught.

Mowanjum’s Community Director Eddie Bear said every loss is felt right throughout the community. “Everybody feels hurt, we all go through it.”

Seven percent of the Kimberley’s Aboriginal peoples are homeless – the region’s homelessness rate is at least ten times the national average. The State Government’s neglect is exemplified by a longstanding promise that was broken. They failed to build a $12 million hostel in Broome and instead people sleep rough among the impoverishment at the shanties at One Mile Community, Kennedy Hill and on Broome’s sand dunes.

The United Nations Human Development Index report got this right – that there had been a global improvement in human development led by nations such as Afghanistan, Sierra Leone, East Timor, but Australia’s First Peoples in the Northern Territory and northern Western Australia remain forgotten.

Australians as a whole continue to enjoy the world’s 2nd ranking according to the United Nations Human Development Index, but the descendants of the First Peoples of this continent rank 132nd. For far too many First Peoples it is even worse than most you may dare to imagine.

First published in The Stringer - http://thestringer.com.au/quality-of-life-for-australians-2nd-only-to-no... 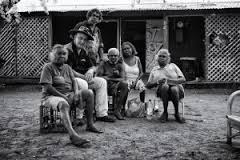 The use of my name

We,the Assange family are truly sick of Jullian using our name.I for one have been questioned when I travel,as have other members of my family,and just has to stop.

What is wrong with his family name Shipton,does his father have an issue with Jullian or a mutual dislike for each other ?

I only know that we are so over this guy,this imposter,this liar,and my cousin Brett wasn't thrilled either........