Press release from the Freedom Movement - "the Aboriginal struggle and our voices will be reclaimed, January 26"

Freedom Movement – “the Aboriginal struggle and our voices will be reclaimed, January 26”

The ‘Aboriginal’ Housing Company’s deplorable action in intending to orchestrate the eviction of the campers on The Block’s Redfern Aboriginal Tent Embassy should be seen for what it is – an attack on the rights and hopes of First Peoples. This morning the police called in to The Embassy. This follows on the back of teh controversial ‘Aboriginal’ Housing Company’s commercial development partner recently advertising the removal of Aboriginal people from nearby districts as an incentive for prospective renters.

The Freedom Summit’s Freedom Movement heralds today’s arrest of one of their delegates, and Embassy stalwart, Wiradjuri woman, Jenny Munro, as a clear sign that First Peoples in this country are held without any respect for their rights, cultural and otherwise, and that their dignity as human beings does not matter. They have only one choice offered to them – assimilation.

The Freedom Movement condemned the arrest of Ms Munro.

The Freedom Movement’s Arrernte Elder, Rosalie Kunoth-Monks said, “Jenny having just lost her mother should not have to go through the indignity of losing her mother earth simultaneously. If it is a Black on Black action, I ask those Black people who are coming from the other side to take a good hard look at themselves. Jenny is one of the champions of the movement of people who are asserting their prior occupancy of this country. We say we have never given away this land and to be assaulted by other black people is unforgivable. Jenny can rest a little easy knowing she is a champion of the black cause. To be given the truth and justice, it is now time to talk Treaty. We must let Jenny know she is the much loved black struggle of Australia!”

The Freedom Movement’s Narrunga Elder, Tauto Sansbury said, “That is a nice Christmas for First Nations People being evicted off your own land. It is shameful, shameful, deplorable and ongoing racism. It does not end, but it will end. This racism, along the racism of homeland community closures, world record incarceration rates of our peoples, the removal of our children, the smashing of our cultures, of our right to be who want to be is why we are converging on Canberra on Invasion Day. It is why there will be national actions in every region of this continent on that day.”

Freedom Movement stalwart, Kamilaroi Elder, Dr Marcus Woolombi Waters said, today in regards to the attempted shutdown of the Redfern Tent Embassy, “This action today highlights two things - 1) that the division between Middle class Blacks defining our culture down to pennies and profit in wanting to sell our souls remains our greatest obstacle. Remember this is the same development company that advertised "The Aboriginals have moved out of Redfern" in its advertising campaign. And 2) What happens when we turn up on mass as word spread across social media on what was happening - if we unite and show our voice in numbers we will win, just as we won in Redfern today and in Brisbane two weeks ago with Musgrave park. This is why as many as possible should get to Canberra and unite in our major cities, Brisbane, Sydney and Melbourne on Australia Day to mark a National Day of Action. We need to come together and show we represent the hundreds of thousands of our mobs and show them we have a voice...”

The embassy stands as evictions are to be held off for now. 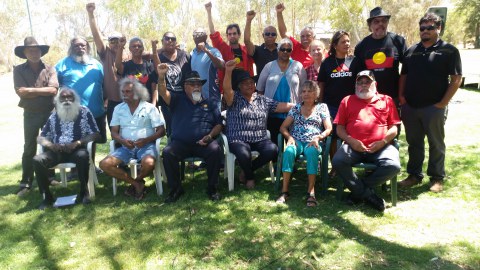 Background to 'The Freedom Summit'

43 years to the day since Tent Embassy; sit-in by true leaders

Background to the National Freedom Movement

WGAR News: Call out for people to attend the 'National Convergence on Canberra Sit-In Protest' on the 27th of January 2015

Urgent plea to the Nation to come to Canberra for the Sit-In: http://vimeo.com/117165236
Homepage of the National Freedom Movement: http://freedommovement2014.wix.com/freedommovement
Events for 25th, 26th and 27th of January 2015 National Convergence on Canberra
National Freedom Movement What's it about?
Freedom Summit - The Delegates
NITV News: WA Protestors get on board for Survival Day's "Sit In for Freedom" in Canberra

National Freedom Movement - Reportbacks on the lead-in forums to the January 27 Sit-In, Canberra:

Read about how the Adelaide forum went:
- Mobilising for Canberra 2015-our chance at history, to reclaim the Aboriginal rights struggle and the justice

Read about how the Sydney forum went:
- 'The Opportunity for real change'
- People urged to attend Canberra First Peoples sit-in

Footage of 27th of January 2015 Sit-In by Eleanor Gilbert

WGAR News: Flyer: First Nations Freedom Movement - Parliament House Sit-In - From 9th of February 2015 - Every day 10am till 4pm - Until Our Voice Is Heard