In the first light of dawn at Ballarat on December 3, lantern and effigy maker Graeme Dunstan set alight an effigy of Major General Duncan Lewis, the new head of ASIO, at the Eureka Dawn Vigil held at the Eureka Stockade Monument.

In the Ballarat Courier's article by David Jeans, Anarchists kick off Eureka 160th anniversary ceremonies, it quotes Dunstan that the effigy burning was to bring fire back into the commemoration, "On the morning of the stockade, there was the smoke of gunpowder, smoke of the diggers fires," but there is no explanation of why Duncan Lewis was chosen as this year's "greatest oppressor of Australian rights and liberties".

To understand why Duncan Lewis was chosen you need to read Dunstan's media release or have heard Dunstan's explanation at the effigy burning. I captured this on video, with a transcription below.

So I say this man who has lied to Australian people about weapons of mass destruction has set us up for permanent war, including Iraq invasion 3, another 200 Special Air Service troops deployed. This is the man who is the most danger to our rights and liberties in this time. This is based on his record, and the new powers he has been given recently. Any Special Intelligence Operation becomes secret which means that all the fighting that goes on overseas has become secret.

"Part of our remembrance has become recollection, looking around and see who is it that is oppressing us in this time. Who is it that is taking away our rights and liberties.

"He was a bit of a hero in East Timor. It was his operations, he got decorated for this, that got rid of the Indonesian trained militias up there, that were slaughtering the people.

Then he got a role in the Department of Defence. He was looking after something menial like cadets. It seemed his career had come to a halt, but then it changed radically.

He got a job, a new job had been created by Prime Minister Howard: National Security Advisor in the talk up for the Iraq war invasion. So he set up office in the parliament. He had direct access to the Prime Minister and cabinet advising them on the terror war.

So it was he who ignored, diminished, refused to acknowledge the evidence coming in. The intelligence reports coming in from the Office of National Assessments (ONA), this is Andrew Wilkie, saying that the intelligence on the weapons of mass destruction was exaggerated and certainly no cause to go to war.

He is responsible on his own and for this nationally for the mass slaughter of a million civilians, an army of people killed by that invasion. The destruction of their infrastructure and it has left them in a permanent state of civil war. What was once a modern state, free education, free health, free university, infrastructure, roads the best in the middle-east in Iraq. They had used their oil resources to make a better state. He was one of the destroyers of it.

He continued to advise on the Terror War under Rudd and under Gillard. Under Gillard he moved on to ecome Secretary of Defence, but not before he got the Prime Minister to commit the Special Air Service regiment Sabre Squadron, all 80 of them, to indefinite deployment overseas in Iraq. Never happened before. Sending people off to war and not putting a finish date on it. And then making the Special Air Service no reports about what they have been doing. The only way we found out about what they have been doing is reading the American reports of what is happening under Special Operations Command. What happened in that war run by the CIA, remember, they created a whole new core called Special Operations Command and all the Coalition of the Willing, all the special forces were taking orders from Special Operations Command. That includes the Australians.

What they were doing was a campaign called Capture and Kill. Never happened in warfare before. This was industrial scale home invasions. Troops dropping out of the sky in helicopters 3am in the morning, blowing up the doorways, the gates to compounds, rousing everybody out of bed at gunpoint, women, children, old people. If they find the person they were looking for: bang! Summary execution. If they don't find them, they take someone away with them to a black site where they are tortured to provide information. This was happening on a scale never happening before: 500 a week, 2,000 a month they were doing this. If you can imagine the amount of work, the planning that goes into this kind of operation. This was an astonishing thing. Who was the initial planner of these operations? it was an Australian General, Major General Michael Krause, former commander of 7th brigade. He is the same guy that welcomed the US marines and helped them setup in Robertson Barracks when he was the commandant. That is how close we have become.

Meanwhile, Major General Duncan Lewis becomes Secretary of Defence, the first military person ever to take on this position. He resigns in protest against Gillard's 10 per cent reduction in military spending and goes off and takes up a position as ambassador with NATO at the Hague where their planning other wars, regime changes in the middle east. He came back to take up this position as Director General of ASIO with new powers.

So I say this man who has lied to Australian people about weapons of mass destruction has set us up for permanent war, including Iraq invasion 3, another 200 Special Air Service troops deployed. This is the man who is the most danger to our rights and liberties in this time. This is based on his record, and the new powers he has been given recently. Any Special Intelligence Operation becomes secret which means that all the fighting that goes on overseas has become secret.

The other fascinating thing I find about this penchant for secrecy amoungst the intelligence organisations is all the telephone calls we make, all the email messages we send, this one is collecting them.

Major General Duncan Lewis was interviewed when he took up this office and he said that Edward Snowden, for example, was a traitor, and it is essential that ASIO has all the metadata. This is the man. 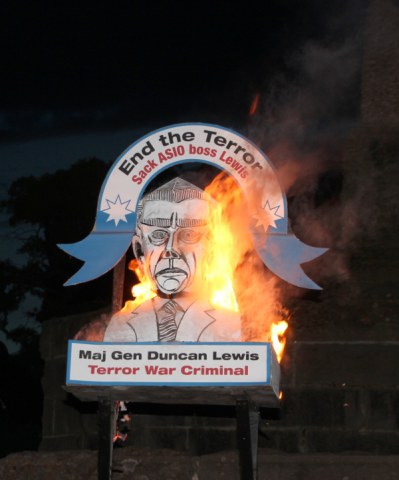