From November 8 community groups will launch a range of actions and events against the economic rationalism, state repression and sheer ridiculous spending of the G20 event in Brisbane. While the police report over 20 groups they know of, the Brisbane Sovereign Embassy - BASE  and BrisCan-G20 are organising a People's Convergence. There will be street marches through the week and a People's March on November 15.

Themes include: indigenous sovereignty, further austerity measures likely to be recommended by G20 members, climate change and inaction, state repression and the erosion of democracy in Australia, and will include a range of local, national and international guest speakers and musicians.

The First Nation’s Decolonisation Before Profit program of events will run throughout the week, Nov 8 – Nov 16, and will include a Global First Nations Conference – November 15-16. [See program here]

Locations: A Citzen's Media Centre has been established for members of the public to create their own media about the G20 at http://wanderingcooks.com.au/ [maps]

Operations HQ for BrisCan will be located at Left Bank Basement, 5 Paris St West End, about 1.5km from the Brisbane Convention Centre where the G20 summit will occur. Sovereign Embassy Actions will centre around Musgrave Park, close to the G20 venue and a tradiational meeting place.

Community Radio 4ZZZ102.1fm promise live coverage of the action on Friday afternoon from 3pm whihc can be live stremed from their website [here] 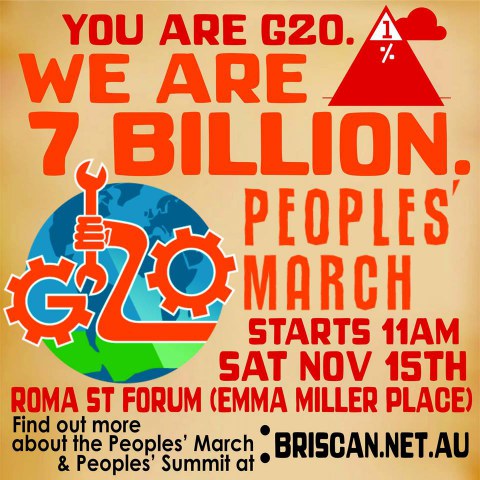