Four pink-hooded knitters were forcibly ejected from Sydney's oldest 'Gentleman's Club' 'The Australian', today, declaring they were seeking refuge after recent women's refuge closures. The group unfurled a 4x3meter knitted banner in the club's lobby & proceeded to sit on it and knit as irate staff dragged their wool and a giant 'Vagina Dentata Taxidermy' from the venue.

The group, Knit Your Revolt!, dressed entirely in pink and red and wore bright knitted balaclavas reminicsent of punk-activists Pussy Riot who will speak this weekend at the Opera House. They recarpeted the lobby of the exclusive men's-only club at 165 Macquarie st with a giant knitted banner.

Created by 140 knitters across the nation, the banner read 'Misogynistic Knit Wit: Not PM Material' and bore a knitted likeness of Prime Minister Abbott.

Members of Knit Your Revolt asked befuddled staff at The Australian Club for membership applications explaining that recent women's refuge closures had left them nowhere to go but were told they'd be "better off at The Queens Club".

Knit Your Revolt Spokesperson Bad Ass Motherstitcher (The Stitch) asked why women weren't permitted to attend The Australian Club, "If Tony Abbott can be Minister for Women, why can't we join Australia's oldest boys' club?" Australian Club representative Mr Hoar said in response: "Because you can't" and elucidated that the only women allowed were "wives".

KYR member Prank Queen then invited The Australian Club members to join Knit Your Revolt instead, "Reciprocal arrangements between elite clubs such as ours are common".

Undeterred the knitters asked Mr Hoar to stand in solidarity against the closures of refuges and to appeal to PM Abbott: “In his role as Minister for Women we call on Abbott to speak up for womens’ refuges across the state,” said KYR member Scary Woolstonecraft, “And in his role as a massive toff, we call on him to ensure that the same fate does not befall other refuges such as the Australian Club, the nation’s oldest refuge for wealthy frat-boys.”

Mr Hoar and colleague 'Tony' (not Abbott) appeared flustered as they removed a giant 'Vagina Dentata Taxidermy' from the building and advised the knitters that they were tresspassing. When The Stitch objected to her "vagina being manhandled" Mr Hoar said salaciously, "You should be so lucky".

"Australians should remember you must have a member to be members of the Australian Club" remarked Prank Queen as they knitters were escorted from the premises.

Knit Your Revolt left calling cards and attached placards to the facade reading:

Does a strap-on count?
MENmebership
Refuge is a Right
Revolt against 'Going Home Staying Home'
Don't turf the toffs.

* So far Knit Your Revolt have yet to receive any applications to join their national knitting posse from Australian Club members. 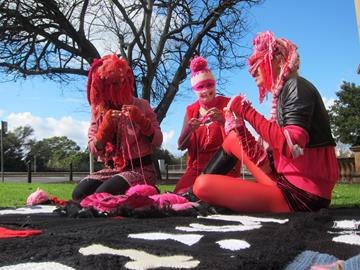 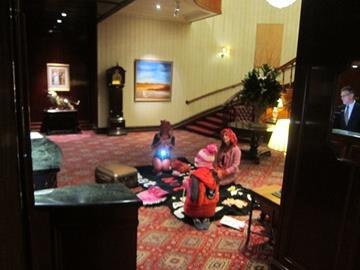 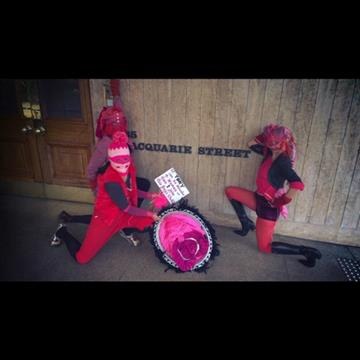