Rape - global crisis, from India to the United States

Gerry Georgatos - 6.6.2014 - Rape and sexual violations are endemic crises - rife - yet unchecked by substantive education. We meander towards more checks as we unfold human rights and social justice vocabularies to catch up with one and all. In the meantime the human narrative is traumatised by one atrocity after another, and the multiple traumas from the permissibility of atrocity. Two cousins, aged 12 and 14 years were raped and then hanged last week in India. Yesterday, Madhya Pradesh Home Minister Babulal Gaur described rape as a ‘social crime’.

Minister Gaur said “sometimes it’s a right, sometimes it’s wrong.” This from a politician but it reminded me of far too many surprising comments from Australian and American judges who for far too long teetered in travesty with views that are not dissimilar to Minister Guar’s.

In 1993, a South Australian Supreme Court judge sparked outrage when he told a jury that it was acceptable for men to use “rough handling” on their wives to persuade them to have sexual intercourse. He was not the first to say something like this but for a little while he got chased down by the public outrage. There are other worse cases, traumatic even for readers. With rape trials in Australian and American courts, the victims are ‘raped’ again and again by the manner of questioning and by the manner in which a verdict and the explanation of a ruling are delivered. I am not referring to the fact of what may or may not have occurred but to the brutal and often inhumane manner a court room – from judge down – treats people.

The remarks by Judge Derek Bollen in the Supreme Court of South Australia caused a nationwide furore. The man was acquitted of five counts of rape and one of attempted rape of his wife.

“There is, of course, nothing wrong with a husband, faced with his wife’s initial refusal to engage in intercourse, in attempting, in an acceptable way, to persuade her to change her mind, and that may involve a measure of rougher than usual handling.”

“It may be, in the end, that handling and persuasion will persuade her to change her mind, and that may involve a measure of rougher than usual handling.”

“It may be, in the end, that handling and persuasion will persuade the wife to agree. Sometimes it is a fine line between not agreeing, then changing of the mind and consenting.” The judge then made surprising remarks about the allegation of rape – “women have manufactured or invented false allegations or rape and sexual attack.”

The woman at the centre of the case wrote to the judge about “what right he had to make such statements.”

She said that “I was always led to believe that judges were unbiased.”

Clearly not – and that’s the world over.

We are still unfolding vocabularies for our human rights and social justice languages, with much education and much engagement within that education to be undertaken. This is made complex by the fact that geopolitically and demographically time and space do not collapse. Generations of change, as they have in many places, are still needed in other places. But time and space can be sped up to its coalescing of humanity with education; the greater the levels of education the faster we will unfold the vocabularies and the deliberations, the ways forward. The United Nations, a failure on so many other fronts and a political tool of multinational robber barons and shadow states, is still nevertheless best placed to refocus itself as an educative organisation, bringing on the humanity. It does its educative work through myriad programs but it’s still piecemeal, still a crawl despite what are seen as great successes. I write this only in light of the sense of urgency that would save lives now instead of in the future alone.

“Until there’s a complaint, nothing can happen.”

But many complain and instead find themselves vilified, ostracised, beaten.

During a recent Indian election, Samajwadi Party leader, Mulayam Singh Yadav said of the proposal of the death penalty for rapists, “Boys commit mistakes. Will they be hanged for rape?” I am opposed to the death penalty however Mr Yadav’s comments bespeak of a certain acceptance of rape as if a minor offence.

The two cousins were hung from a tree, in an image that has gone around the world, an image reminiscent of the public lynching and hangings of America’s Black youth – young men and women. Both men defended the Government of northern Uttar Pradesh, which has been a focal point of outrage from around the world since the gang-rape and murders of the two girls in the village of Katra Shahadatgani last week.

Maybe because of the public outcry, locally and then nationally, and with the eyes of the world watching, three men have been arrested and two policemen were held on suspicion of a covering up the crime.

It has been much said that in India a rape is reported every 21 minutes. But this is most definitely an underreporting.

Minister Gaur said that “there is no information on who will rape someone, they happen unpredictably.” But crime is predictable, and education is the way forward.

Regressive attitudes within India towards women remain despite huge strides that see in many layers, including the highest offices in the nation, women and men as equals, but because India deals with the complexities of castes, impoverishment on a scale that most other nations cannot understand, there is a long road to walk before equality reaches all Indians. One in every six human beings on this planet live in India.

India has been described the ‘rape capital’ of the world. It may well be so if we estimate unreported sexual violations. But rape remains a worldwide tragedy, with education necessary, taboos that need to be shattered, and justice systems in need of understanding in how better to respond.

In fact, in terms of reported data, it is the United States with possibly the highest rates of rape and sexual violations of women. India’s National Crime Record Bureau reports a 7.1 per cent increase since 2010, with one in three rape victims aged under 18 years, and one in ten aged under 14 years. But in terms of reported rapes India ranks third in the world.

In reading reports of vile gang rapes throughout the United States, apparently a much more common occurrence than in India, education has a long way to go to reach American youth and older. The culture of silence around rape in America, for victims and perpetrators, and the families and communities who protect perpetrators, despite the high reporting rates of rape in America, are just as difficult to understand and deal with as they are in India. Shame and smearing of the victims are outcomes of the cultural crises but it is surprising to find that shame and smearing are more significant upon the victim than for the perpetrators. There are no differences between rape in India and the United States, only perceptual modifying by the media whereas in real terms rape is rape, gang-rape is gang-rape and the cultures of silences and shame around them exactly the same.

Two years ago, a 16 year old Moroccan girl, Amina Filali, killed herself after being severely beaten in the marriage that had been forced upon her. The forced marriage was to her rapist. Morocco’s laws allow a rapist to marry his victim if she is a minor – this avoids prosecution for rape. Following Amina’s death, hundreds of women protested in Rabat, arguing that “the law has killed Amina”. But laws are underwritten by the normative and cultural settings.

In the small rural setting that Amina came from, “it is unacceptable” to lose ones virginity. The legal age of marriage in Morocco is 18, but in the case of rape of a minor exception can be made if all parties consent through the Court.

MORE READING:
Last year, The Stringer wrote about a 15 year old Maldivian girl sentenced to 100 lashes for being raped. The courageous reporting of some of the little nation’s reporters most certainly ensured that this did not occur. Minivan News reporter, Hawwa Lubna, wrote, “With an unforgiving system and laws stating that it is a punishable offence to give birth outside of marriage, driven by a thirst to punish the victims rather than protect them, victims find themselves alone, helpless and forced to remain silent.” http://thestringer.com.au/15-year-old-girl-sentenced-to-100-lashes-for-b...

Brutal gang-rape in India is a call to everyone worldwide to ensure changes http://indymedia.org.au/2013/01/01/brutal-gang-rape-in-india-is-a-call-t... 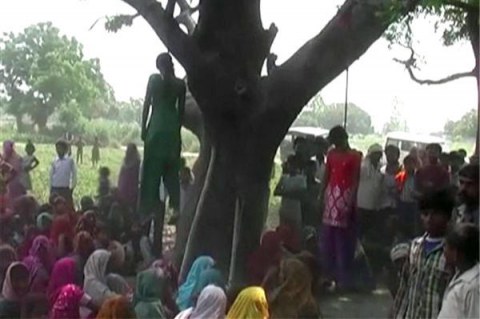