The Whitehaven coal mine at Maule's Creek near Boggabri in north Western NSW involves the destruction of a substantial part of the ecologically distinct Leard Forest. One of the requirements for approval was the provision of environmental offsets to balance 'like for like' against the destruction of high biodiversity habitat. But the latest environmental report by Dr John Hunter advises the offsets for critically endangered ecological communities are "vastly overstated".

This shows that the approval under the EPBC Act by former Environment Minister Tony Burke and the continued support given by current Environment minister Greg Hunt are a travesty and likely a dereliction of duty of care for the environment, threatened species and biodiversity.

Environmental Offsets are false and inaccurate

The report on the offset area was prepared by botanist Dr John Hunter and released on 14 February 2014. It was commissioned by Lock the Gate after major concerns were raised by three other ecologists about the accuracy of vegetation maps used to gain the Whitehaven mine approval.

National coordinator for Lock the Gate Phil Laird said the report highlighted that the “like for like” offset that was required for the mine approval was pure fiction. He argued that the mine would result in the permanent loss of the critically endangered ecological community and its associated threatened species.

“Whitehaven coal will clear more than 500ha of critically endangered box gum woodland and 1665ha of habitat for 31 threatened species. That impact has been approved based on offsets which turn out to be Stringybark open forest, which is the wrong vegetation community and wrong habitat for the threatened species” Mr Laird said.

“The Stringybark forest does not provide suitable habitat for the majority of the threatened species that occur in Leard State Forest, species such as Corben’s long eared bat, large-eared pied bat, swift parrot and the regent honeyeater, which prefer the critically endangered Box – Gum woodland.

“This is a brazen attempt to bypass federal and state legislation that are supposed to protect endangered species.”

Leard State Forest and Mine approval

The Maules Creek mine requires clear felling 1665 hectares of native vegetation which includes 554 hectares of Box Gum Woodland. Much of this area includes mature high value habitat for species. Clearing this area and provision of roads also impacts the remaining forest through greater 'edge impacts' allowing invasive species and more human impacts and less ecosystem resilience for the effects of climate change.

Approval for the Maules Creek Coal project was granted by the NSW Government on 23 October 2012. Federal Environment Minister Tony Burke granted conditional approval on 11 February 2013. One of the conditions was that the quality of the habitat and endangered woodland in the offsets be subject to independent review and submitted to the Minister for approval, before the end of 2013. The condition stipulates that the proponent must publish the review on its website. This independent review remains unpublished, with the continuing development of the Maule's Creek mine a breach of this approval condition.

The approval decision was appealed by Northern Inland Council for the Environment represented by the NSW Environmental Defenders Office with the Federal Court dismissing challenges to the approvals on 20 December 2013. Justice Cowdroy's judgement he identified in section 39 that if offset conditions were breached, this could entail consequences including penalties, as well as allowing the Minister to vary conditions or approval of the entire project.

“This decision, amongst other things, confirms that the process for establishing biodiversity offsets under our Federal environmental laws fails to protect places of high environmental value such as the critically endangered Box Gum Woodland in the Leard State Forest”.

“Basically, the law as it stands allows for a proponent to say that it will offset impacts even if those offsets don’t currently exist.

“This was an important area of law to be tested because offsets are regularly used to justify major projects like the Boggabri and Maules Creek mines which involve clearing of large tracts of critically endangered forest.”

Just to add salt into the wound, the Federal Government announced immediate budget cuts in December 2013 to defund the various Environment Defenders offices around the nation. The EDO offices have been a thorn in the side of mining and development projects allowing communities to challenge approval processes in landmark cases.

As part of the mine approval Whitehaven had to formulate a Biodiversity Offset strategy providing 'like for like' with similar plant species and ecosystem communities in similar or better condition to the area being cleared for the mine with 9334ha of threatened species habitat and 5532ha of Box Gum Woodland ecological community in the region (included in or in addition to the 9334ha of habitat). A commitment was also made to restoring degraded areas to Woodland and rehabilitating the area post-mining to pre-mining condition under the strategy.

What independent surveys have found is that offsets were not ‘like for like’ since the habitat value of the vegetation in offset areas has been vastly exaggerated and large areas claimed to be the endangered Box Gum Woodland are in fact other, less valuable communities.

“It is the inescapable conclusion based on the sampling of 83 sites that the extent of the CEEC mapped by Cumberland Ecology is vastly overstated and perusal of the data collected within other mapped units that the other vegetation types are equally poorly circumscribed and mapped. Based on the results reviewed herein, the on-ground extent of this critically endangered ecological community is approximately 5% of the area mapped as such by Cumberland Ecology but that some small isolated occurrences may occur within other mapped units."

Mr Laird called on Federal Environment Minister Greg Hunt to step in and prevent any further clearing or construction of the Maules Ck mine until a full inquiry had been completed.

“The Government has been sitting on the findings of its own investigation and Whitehaven’s independent review, failing to release either of them publicly. It raises the question as to why they are keeping this information out of the public eye,” he said.

“The company may already be in breach of its approval conditions by failing to make public the independent review of its biodiversity offsets.

“There have been big question marks over Whitehaven’s offsets from the outset and the secrecy and blatant disregard for regulations continues.”

Local farmers, conservationists and Activists have been campaigning against the destruction of the Leard State Forest by the Maule's Creek mine for over two years.

Jonathan Moylan brought national attention to the ANZ Bank financing the mine in January 2014 when he issued a hoax letter advising that ANZ had decided to cancel the loan as this coal project was no longer in accord with best ethical or sustainable business practice. This caused quite a kerfuffle last year with Moylan now charged with breaching section 1041E of the Corporations Act and facing 10 years in jail and a fine of up to $765,000. Moylan is due to stand trial in the Supreme Court of NSW on Monday 30 June 2014.

In January this year work on the mines was further delayed by the Leard blockade. Twenty nine people from a broad cross-section of the community have so far been arrested in January and February protecting the forest. Read citizen journalism reports on the Leard Blockade at the NoFibs website curated by veteran journalist Margo Kingston. 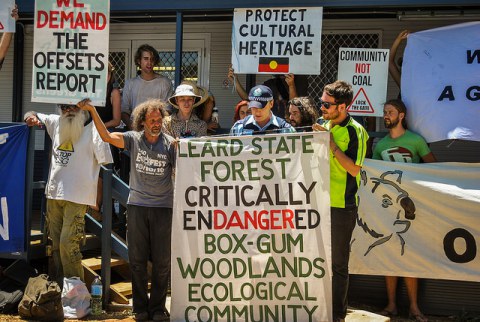 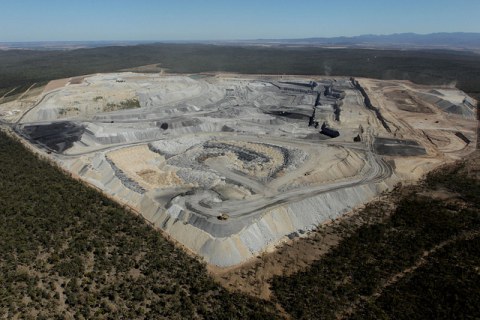