It’s been over a week now that CFA crews have been battling the 1.3km blaze at Hazelwood coal mine. It’s also been over a week now that the surrounding areas of Southern & Western Gippsland have been blanketed in a fine haze of toxic smoke. And it’s not likely to stop anytime soon with predictions the fire could burn for weeks, months or even decades if it gets deep into the coal seam.

We’ve had fire smoke before in Gippsland, but there’s something different about smoke from the mines. It smells different. It’s more oppressive. And it’s seen many residents coughing and sneezing upon venturing outside. That’s because smoke from a coal seam fire contains more than your usual cocktail of particulates from an ordinary bush fire. The Victorian Chief Health Officer Dr Rosemary Lester has advised Gippslanders that the current levels of smoke being endured can not only aggravate existing heart or lung conditions, but may also cause members of the community to experience irritated eyes, coughing or wheezing. Gippsland paeditrician Dr Jo McCubbin warned that the toll of smoke inhalation now could cause long term health effects.

“Everyone should avoid prolonged or heavy physical activity,” warns Dr Lester in a statement, which has got to be pretty tricky for the many in Gippsland for whom heavy physical activity on the farm is part of essential daily work.
firefighter
More than 20 CFA crew have been evacuated from the mine suffering potentially fatal carbon monoxide poisoning. Residents of Morwell in the Latrobe Valley were sent mobile phone warnings on the weekend, advising them to stay inside because of high carbon monoxide levels.

A more frightening prospect for residents in Gippsland is the fact that the only EPA air-monitoring station is at Traralgon, to the north-east of Hazelwood, while smoke has been blown west by mild easterly and south easterly winds over the last week. There is simply no way for them to monitor the content of the foul air that residents are now forced to breath.

Described by a local journalist who gained access to the site as “nightmarish” the fire front in the mine extends over a kilometre at the surface, while more insidiously, it begins its crawl underground. Underground coal seam fires are a genuine worry for a parched Gippsland region, as they can burn almost indefinately if not put out, and resurface to ignite new fires in the future. In the words of South Gippsland Local Member Peter Ryan putting out a fire in a coal seam is ‘almost as hard as it gets’. This article explains more about the serious dangers that coal seam fires pose.

One thing that’s not been mentioned in the many media reports on the incident is the irony that in a more extreme climate – to which Hazelwood contributes as the most polluting coal power station in the developed world – we’re likely to see more fires threaten the mine. There have been two incidences in the last decade, in 2006 and now in 2014, but before these the last major fire in a Valley mine was in 1902. In the last month there have been several out-of-control bushfires in the vicinity of the Valley, this last one proving to be the straw that broke the camels back.
If there was ever a time for the Government to start preparing a plan to close Hazelwood, this would be it. With Victoria’s manufacturing industry walking out the door it is no longer justifiable to keep energy prices dirt cheap by burning filthy fuel. The government should support the wide-scale roll out of renewables – particularly domestic solar – which will help reduce our massive carbon footprint and aren’t likely to poison firefighters or residents. Our state also has the intellectual capacity and manufacturing know-how to become a powerhouse for the development of commercial solar technology. But instead of supporting this, the government is actively destroying it.
It is absolutely unforgivable to see the government throw fuel on the climate change fire and condemn the health of hundreds of thousands of Victorians, by allowing the continued burning of one of the dirtiest known fuels on earth.

Image courtesy of ABC, 19 February 2014 - Aerial of fire burning in Hazelwood open cut mine at Morwell 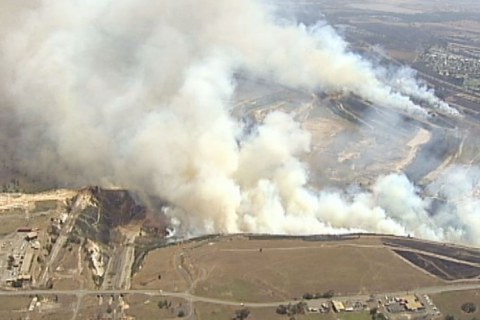 Greetings ! Very helpful advice within this article! It’s the little changes that will make the most significant changes. Thank you for sharing!