Refugee advocates with contacts on Manus Island are reporting witnesses saw PNG police and locals attacking refugees after security employees were withdrawn from the detention centre. Australian Immigration Minister Scott Morrison continues to peddle the lie that an internal "riot" was the cause of the injuries and mainstream media are perpetuating the minister's lies. The incident is another in a long line of human rights breaches and international relations disasters for the Abbott government.

Greens and refugee advocates are calling for the closing of Manus Is. and the sacking of Minister Morrison. Senator Hanson-Young says, "Scott Morrison's attempts to blame the victims of this incident are sickening.Responsibility for this policy failure falls directly at the feet of the Abbott Government and the Immigration Minister.The Government was warned about the toxic environment on Manus Island repeatedly by organisations like Amnesty International and the UN but those warnings were ignored and dismissed." http://greensmps.org.au/content/media-releases/one-dead-shots-fired-live...

The ASRC is calling for the removal to Australia of the 1300 refugees currently on Manus Is. ASRC says witnesses have told them:
"#asylum seekers tell us they ran from compound to save their lives not to escape, guards not protecting them when locals attacked."
""injured many of us, lots of people bleeding..we are not here by choice..who is responsible for our lives?" asylum seeker on Manus"
https://twitter.com/ASRC1

Social media is awash with reports from witnesses such as this one:

"My friend on Manus spoke to me today and said that he'd been hit in the head by a rock and was covered in his own blood. He has described the scenes in Manus as a battlefield. All the staff have left their compound, now it's the asylum seekers versus the locals - the locals comprising most of the G4S staff. There is no one left to protect them. When he phoned he said everyone had gone from the compound except 4 or 5 people and after the phone call he would run away too. We've had reports that the PNG locals are standing outside of the centre with guns, knives and rocks and have probably gone inside the centre by now.

This is hugely concerning because it sounds as if people are SERIOUSLY injured and there's no way for them to receive medical treatment, they wouldn't know how to find the hospital and there is no staff to take them there.

Now we have silence. And we wait."

The image below shows another eyewitness declaration "I spoke directly to 2 eyewitnesses on Manus last night, who both told me that PNG police and locals entered the camp". Also below: the statement issued by G4S, the security firm in charge of the detention centre, member of which are now alleged to be involved in attacking the refugees. #manus #auspol #refugees

Scores of asylum seekers have been injured, some seriously as gangs of armed PNG police and locals go from compound to compound attacking any asylum seekers they can find.

Asylum seekers were left defenceless when all staff and G4S guards were evacuated from the detention centre. Tension with groups of
locals had been building throughout the day. G4S had already withdrawn from Mike compound late Monday afternoon.

Locals are armed with machetes, pipes, sticks and stones – have bashed and cut asylum seekers. One asylum seeker has been thrown from the second floor of a building; others have suffered machete cuts. There is one report that a man has been left with his eye hanging from its socket after a bashing.

Asylum seekers fled from their compounds into the dark in a desperate attempt to flee from their attackers. A call from Mustafa in Mike compound around 11pm said that there were only five or six people left in his compound and they were now fleeing to try and find safety. People had fled all the other compounds. Mustafa said that he was covered in his own blood from cuts to the head, hand and arms. He estimated at least 50 people in Mike compound alone had been injured.

One of the last of the staff to be taken out of the detention centre around midnight Monday night said it will be a miracle if no-one is killed.

Gunshots can be heard in the background of calls coming from the detention centre.

“The blood spilled inside the Manus detention centre is on the Immigration Minister’s hands. Manus Island has always been a disaster
waiting to happen,” said Ian Rintoul, spokesperson for the Refugee Action Coalition.

“It must be clear now that asylum seekers cannot live safely on Manus Island. They should never have been taken there. Asylum seekers must be brought to Australia.” 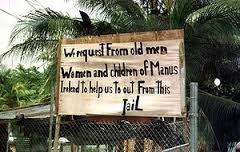 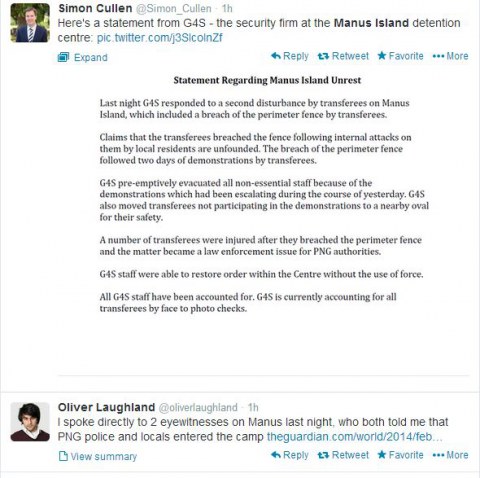 The Refugee Action Collective Protest against Navy Tow Backs this Friday has been turned into an emergency protest against the killing of one asylum seeker and the shooting of another on Manus Island. The man died from head injuries, possibly from being bashed with rocks. 13 others are seriously injured, including one with a basal skull fracture.

Our protest will still start at Defence Recruiting, 501 Swanston St as previously planned but will then march to the Immigration Department, corner Lonsdale and Spring St City

The Refugee Action Collective has called a protest for 12pm Wednesday 19th February outside the Department of Immigration, 299 Adelaide Street, Brisbane.

Protesters are demanding that the Manus Island detention centre be immediately closed and that the asylum seekers be brought to Australia where they will be safe.

“One person has already lost their life” said Mark Gillespie from the Refugee Action Collective, “many more have been injured. People have been attacked with rocks and machetes. This should no longer be treated like a political game by Scott Morrison and he must act immediately to bring the asylum seekers to safety”.

“I am appalled that Scott Morrison is congratulating himself because the centre “has not been destroyed” and that “breakfast” was served at the centre this morning. He is forgetting that an asylum seeker who was in his care has been killed. An asylum seeker in his care”.

Vigil Tomorrow & Thursday for those in detention on Manus Island in wake of the recent clashes with locals & police. Venue is just outside the Department of Immigration in Melbourne city (on Lonsdale st accross from Parliament station). Come from 11am onwards. Bring signs, banners, music, instruments, food, chalk, other creative things etc.