Media Release: A cardboard effigy of Mr Maurice Newman, head of PM Abbott's Business Advisory Council, will burn at the Eureka Stockade Memorial dawn of 3 December as part of the commemorations of the 159th anniversary of the Eureka Rebellion.

This will be the fifth Eureka Dawn effigy burning of the public figure judged to be this season's most offensive to the people's rights and liberties and the ritual now quite a following," said Eurekaphile effigy maker Graeme Dunstan.

He says a lot of consultation went on before choosing Maurice Newman as this year's effigy target.

"But that it came down to the flip of coin between PM Abbott's ideologue and hatchet-man and Abbott's cruel, arrogant and deceitful Immigration Minister, Scott Morrison," he said.

"Mr Newman is a former Chairman of the Australian Stock Exchange. As PM Howard'sÊ appointed the chair of the Australia Broadcasting Commission, he served there as a toe cutter, " said Dr Joe Toscano, convenor of the Reclaim the Radical Spirit of the Eureka Rebellion celebrations.

"As PM Abbott's appointee to the Business Advisory Council, he has been given a long, long lead to pursue the neoliberal agenda of minimising taxes and maximising profits for corporations, privatising commonwealth assets and minimising services to the poor. A reverse Robin Hood, Newman aims to steal from the poor to give to the rich."

The flames of Eureka having dispensed with a cardboard tyrant, Eureka Day will celebrate those who have been conspicuous in defence of rights and liberties with a Eureka Day Awards ceremony under the Southern Cross flag on Bakery Hill from 9.30 am.

Seven Eureka Day Medals will be awarded this year

Award winners will be include

Another will be Dr Gary Foley, who as a Aborignal Land Rights activist was a founder of the Aboriginal Tent Embassy, now a historian, playwright, actor and broadcaster, he is the most radical, caustic and independent voice of Aboriginal Australia.

Also receiving Eureka Day Medals will include three others to individuals - Elizabeth Conolly, Gwen Goedeckie and Ruth Martin - and two to collectives - No Maccas in the Dandenong Ranges/Hills/Tecoma and the International Organisation for a Participatory Society.

Photo Opportunity
Graeme Dunstan and the Maurice Newman effigy will be available: 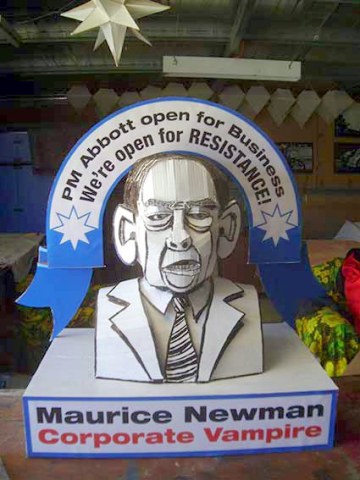